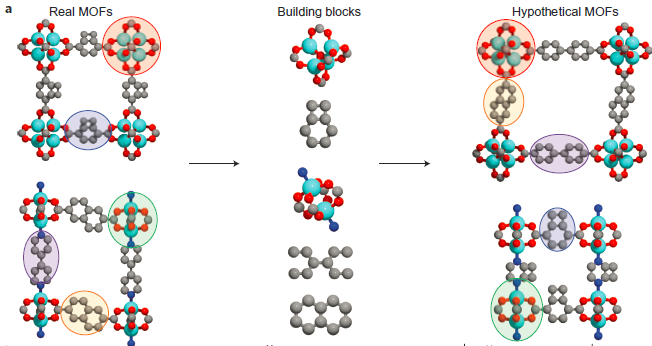 Blogger’s Thoughts: Chemists have limited time to do chemistry because, shockingly, they need to eat, sleep, even socialize…. but computers on the other hand…

Summary: Well, I knew it was going to happen. A computer chemist has been born at Northwestern and is threatening all of our jobs. Alright, I’m being a tad dramatic. What actually happened was a group of chemists paused and asked a very good question: What is the absolute best material for storing methane? You see, this group of chemists studies metal-organic frameworks which are crystalline materials that look like rocks but actually have a huge amount of empty pore space inside. Metal-organic frameworks, or MOFs, are extended structures made of organic ligands and metal ions. Because the diversity of organic ligands is vast, not to mention the number of possible metal ions, a potentially infinite number of MOFs can be envisioned. Which one would have the best methane storage capability? One approach which is actively been taken is to actually go out and make every possible MOF – but this process is time consuming. Instead of the traditional approach, this group turned to computers to simulate many, many possible combinations of common organic ligands and metal ions in hopes of designing the best methane-storage MOF ever. And once the computer identified a candidate MOF, chemists would make it using traditional wet chemistry.

How did the authors do this? They began by mining a large data set of published crystal structures of known MOFs. Using their computer program, these structures were sliced up into components; for example in the portion of Figure 1 reproduced above, the metal clusters and organic ligands were identified and isolated from the structure. The computer got to work with these pieces, metaphorically tumbling them together and assembling them into new structures to yield a total of 137,953 structures. With this vast array potential MOFs, Monte Carlo simulations (a class of algorithms which randomly selects inputs to permit gradual convergence to a desired result) were used to estimate the methane storage capability for each hypothetical sructure. The top 5% of the original 137,953 structures were subjected to second more intensive round of Monte Carlo, and the top 5% chosen of these was for a final round of refinement. In this way a single candidate MOF was identified…synthesized…and found to have the highest methane-storage capability ever at 35 bar pressure, with a measured value only 8% lower than predicted. I expect that we will increasingly see such massive computational efforts being used to guide the time spent by human chemists. See the cool video at the end summarizing the efforts described in this paper.

I wonder if computers will still let me write blog posts if they decide that robots make better chemists than humans?