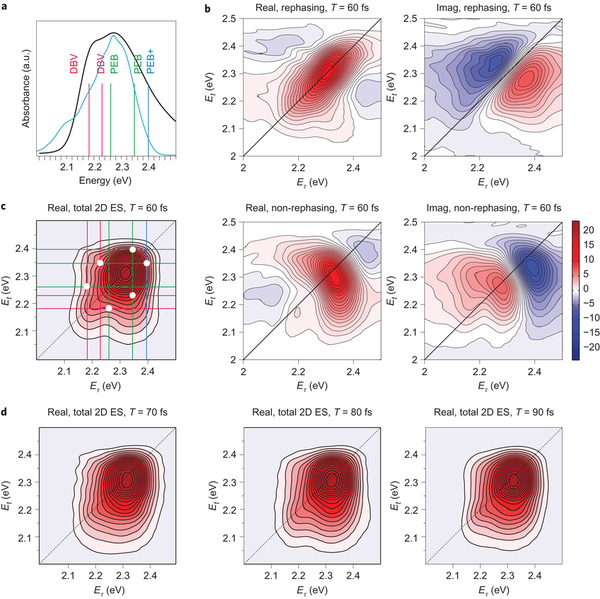 Take-home importance according to the blogger: Forster theory provides a simple description of energy transfer. There is a donor molecule.  There is an acceptor molecule. If the excited state of the donor molecule is similar in energy to an excited state on the acceptor molecule (and the two molecules are in close physical proximity) the excitation can “hop” from donor to acceptor. However, the recent discovery of quantum coherences in the light-harvesting complexes of plants and bacteria indicate that, at least when it comes to photosynthesis, this model may not be sufficient.

Summary: The efficient transfer of energy from one molecule or material to another forms the basis of successful solar energy conversion. The conversion of solar energy to chemical energy is especially efficient in the light harvesting complexes of plants; as a result, these complexes are used as models in the design of solar energy devices and have been studied extensively using spectroscopic and theoretical methods.

A light-harvesting protein is composed of a reaction center that is surrounded by a series of chromophores; the chromophores absorb energy from the sun and transfer it to the reaction center, where it is converted to chemical energy. This energy transfer is usually modeled using Forster theory, in which the coupling between the donor and acceptor molecules is assumed to be very weak. However, recent experimental studies have observed long-lived (~200 fs) quantum coherence that occurs during energy transfer; that is, instead of energy “hopping” from one molecule to another, it is temporarily shared by both.

In this paper, the authors used time-resolved 2D electronic spectroscopy to study energy transfer in the light harvesting protein PE545 of the marine cryptophyte alga Rhodomonas. Their results confirm the existence of a long-lived quantum coherence during energy transfer.

Figure 1 shows a series of 2D rephasing spectra of PE545 that were collected at different time delays following excitation. In a 2D rephasing spectrum, peaks that lie along the diagonal represent a photoexcitation of populations, while off-diagonal or “cross” peaks reveals quantum coherence, or superpositions of states. The amplitude of these cross peaks (whose positions are indicated by the white dots) oscillates at a frequency that is proportional to the energy difference between the states; this oscillatory behavior is illustrated in Figure 2. In these spectra, they observe a quantum coherence with a damping time of ~100 fs.

Furthermore, with the use of computational modeling, to show that when the coupling between molecules is in this weak-to-intermediate range, the interactions between the system and the bath (for example, the hydrogen-bonding interactions between the light-harvesting protein and surrounding water molecules) can have a significant effect on the degree of coherence between the donor and acceptor electronic states.