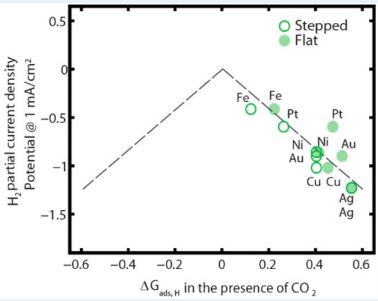 Title: Trends in the Catalytic Activity of Hydrogen Evolution during CO2 Electroreduction on Transition Metals

Generating renewable electricity by electrochemical reduction of carbon dioxide is an attractive way to reduce the carbon footprint on the environment. Especially if we can carry out the reduction of CO2 in water, we can generate useful chemicals like carbon monoxide (CO) by reduction of the former and oxygen (O2) by the oxidation of the latter. However, the fundamental challenge in carrying out CO2 reduction in water is the competing reduction of water to hydrogen (H2). To develop catalysts more selective to CO2 reduction it is imperative to understand the interaction of gaseous CO2 with the surface of solid metal catalysts. In the study discussed here, the researchers have systematically looked into the interactions of six commonly used metals in electrochemical CO2 reduction in aqueous conditions both experimentally and theoretically.

First, the potentials for generating a current density of 1 mA/cm2 (minimum current density threshold used as a reference for all the catalysts) for H2 production were measured for all six metal electrodes. This showed Fe reducing water most efficiently at more positive potential followed by Pt>Ni~Au>Cu>Ag, as shown in Figure 1. After this trend in Hydrogen Evolution Reaction (HER) was established, the authors computed the binding energies of molecular H [*Eb(H)] on the surfaces of each of the metals in the presence and absence of CO2. Quite expectedly, the binding energy/affinity for H diminished in presence of CO2 which reduces to CO and in turn CO competes for the surface sites along with H2. Figure 2 shows the trend of *Eb(H) vs *Eb(CO) for various metal catalysts. Here we have to be careful about the various morphologies and structures of these materials since these two parameters control the efficiency of the overall catalyses. Hence the *Eb(adsorbate) for both flat and stepped surfaces (Figure 2) are considered. All metals to the extreme left side of the indicated line at -0.5 V are considered to be strong CO binder (for example, Ir to Pt). On the other hand, the metals closer to this line, such as Cu and farther right to this line, like Au to Pb are considered to be moderate to weak CO binders, respectively. After categorizing the metals under study according to various affinities for adsorbing CO, the free energy for adsorbing H (∆Gads,CO)for the three classes of metals was measured from previous reports. Two different correlations were observed: This plot is called a “Volcano Plot” and it is typically applied in catalyses for understanding the efficiency of solid catalysts. The catalyst residing at the tip of the plot is considered to be the most efficient one compared to the ones to its right and left. However, in this case we do not see a well-structured volcano shape. However, we can still conclude that Fe is the most efficient among the metals studied. The most interesting finding in this study is actually showcased in this plot. Due to the correction for CO co-adsorption, *Eb(Hcorrected) for flat-surfaced Fe is moved onto the dashed line, whereas flat-surfaced Pt and Ni moved away from the line.  Thus flat-surfaced Fe becomes more efficient in HER whereas HER gets suppressed for flat-surfaced Pt and Ni.  This is a very interesting find since Pt is considered to be the most efficient metal in HER research by far.

Considering the co-adsorption of CO along with H on the surface, the researchers have developed a combined experimental and theoretical method to critically analyze the performances of a wide range of metals generally employed for both H2 evolution and CO2 reduction. This method not only explains some prior discrepancies in efficiencies among these metals, but it will also help to design better catalysts in future.