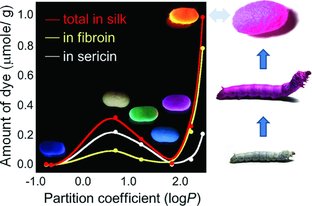 The concentration of dye in the produced silk changes based on how hydrophobic the dye is (increasing partition coefficient). The cocoons (also pictured on the graph) and the silkworm itself become colored when dye is incorporated into the silkworm feed.

Affiliations: Institute of Materials Research and Engineering, Department of Physics, Division of Bioengineering at the National University of Singapore

If dying eggs amuses you because it takes a normally blandly colored object and makes it look bright and exciting, imagine how much amusement you could derive from silk that not only was colored, but that glowed as well!

While most textiles can be dyed externally, much like Easter eggs, in the “harsh” conditions of relatively high temperature and pH, Tansil et al. have investigated a method of dying silk internally by feeding silkworms a dyed version of their feed. What’s even cooler is that it’s possible to use this method with dyes that not only absorb certain colors of light but dyes that luminesce as well! Most colored dyes make something appear colored by absorbing in other areas of the light spectrum (leaves look green because chlorophyll absorbs in the red and blue parts of the light spectrum, but not the green part of the spectrum). Luminescent dyes absorb light and then send some light back out with a particular color. An additional benefit of dying silk internally is that the dye can be incorporated into the core of the fiber instead of residing mostly in the outer casing, which is the case for the “naturally colored…Thai golden silk”. Being able to dye the fiber itself means that even after the processing to turn the fiber into a fabric, the dye will still be there.

The big chemistry part of this work is the connection that the authors draw between the hydrophobicity of the dye and the successful incorporation of the dye into the silk fiber when it begins in the silkworm feed. The authors use the logarithm of the partition coefficient

to measure hydrophobicity. The idea behind that metric is to compare how soluble the dye is in a hydrophobic solvent like octanol to its solubility in water; a dye that is very polar (“like dissolves like” and water is polar) will be more likely to dissolve in water, whereas it will not dissolve very well in a hydrophobic or oily solvent. For that type of dye, the top of the fraction is small and the bottom of the fraction is big, so the fraction as a whole is small. When you take the log of that small number, you get something negative. In contrast. a very nonpolar or oily dye will have a large top of the fraction and a small bottom of the fraction, which results in a big number. Taking the log of that number will result in a positive number. A dye that dissolves 10 times better in octanol than in water will have a P value of 10, so the log P will be 1.

As you can see in the figure above, Tansil et al. found that more and more dye made it into the silk as the log P value increased from -0.79 to 0.5 because the more hydrophobic molecules stuck around in the silkworm and made it into the silk instead of being easily cleared from the silkworm’s body. Any further increase in hydrophobicity (log P) decreased the amount of dye absorbed because the casing around the silk fiber is a little more hydrophilic, so it doesn’t allow super oily substances to get through it to the fiber core.

Something different happens at log P values above 2.0. For very high log P values ~2.5, the dye incorporation into the fiber core was almost ten times higher than the peak value for the other dyes (10^2.5 is approximately 300, so for that data point, the dye was ~300 times more soluble in octanol than in water). Based on the previous argument, there’s no way these super hydrophobic molecules should be able to make it through the hydrophilic casing into the silk fiber! The authors noticed that for these dyes with large log P values, dimers (pairs of molecules) were formed at very high concentrations. Those dimers could stick together such that either hydrophilic carboxylic acid groups or hydrophobic ethyl groups were sticking out. So presumably the molecules themselves were hydrophobic enough to remain in the silkworm’s body, but when they encountered the hydrophilic silk fiber casing, they oriented themselves with their polar parts outward, meandered through the casing, made it through to the silk fiber itself, and promptly oriented themselves with the nonpolar parts out, so more molecules could accumulate there.

The authors posit that these methods could be easily scaled up to create dyed silks, thus eradicating a lot of the chemical waste and energy used to dye silk externally. Even at the lab scale, though, this technique makes for some really cool looking pictures!