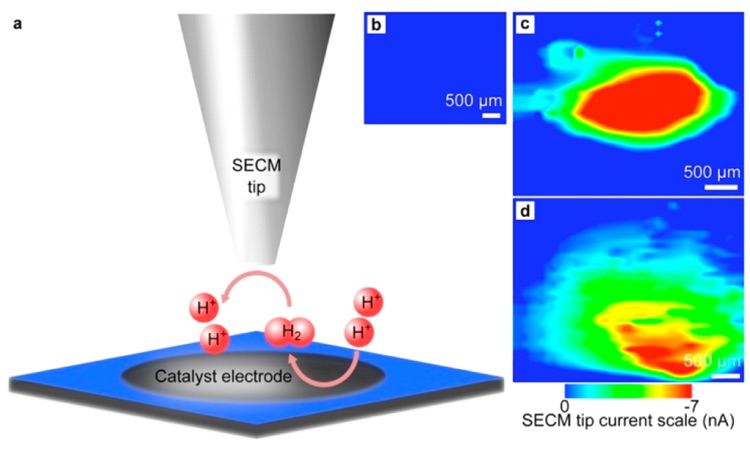 The ability to perform quantitative structure-function analysis at the individual nanoparticle level is essential.  For example, it is well documented that platinum nanoparticles can attain a greater catalytic effect for the electrochemical reduction of H2 than for the reaction performed instead with a bulk platinum electrode – evidenced  by an increase in the rate constant for the reaction.  One aspect that is typically ignored with nanoparticle systems is that it is likely that the impact from each individual nanoparticle is quite different than the bulk average due to  slight differences in structure and composition of each individual particle (discussed more below).   With the macroscopic analysis of nanoparticle systems that is typically reported, all that can be determined is an average collective effect from all of the nanoparticles, when it is actually quite possible that a small fraction of the nanoparticles are responsible for a majority of a beneficial result.  By analogy, imagine a hypothetical situation in which you are tasked with analyzing widget production of Acme Widget Factory; consisting of 10 employees that collectively produce 100 widgets per day.  Restricted to only this data, you could only conjecture about the collective average: 100 widgets are produced each day by the 10 employees.  But assume you are also provided production data at the individual employee level; data that reveals there exists a single employee who produces 91 widgets per day, while the other 9 employees incompetently fiddle around and each only produce 1 widget per day.  Such enhanced resolution is quite enlightening.

One aspect that makes nanoparticles  so wondrous and remarkable is this fact that a mole of atoms arranged as individual nanoparticles exhibits remarkably different physical and chemical behaviors than the same mole of atoms arranged as a single entity.  Likewise, a nanoparticle with pyramidal geometry may exhibit different properties than a spherical one; and other factors such as crystallinity, crystal structure and domain size, and even the density and type of defects (e.g. vacancy, interstitial, grain boundary defects) characterizing a specific nanoparticle will significantly affect its physical and chemical properties.

Although a comprehensive foundation in quantum mechanics is requisite to vitally engage in the field of nanoscience, without such one can still recognize the fascinating and unique characteristics exhibited by nanoparticles relative to their “bulk” counterparts.  While overly simplified, many interesting attributes of nanoparticles can be rationalized by simple consideration of size and surface properties.