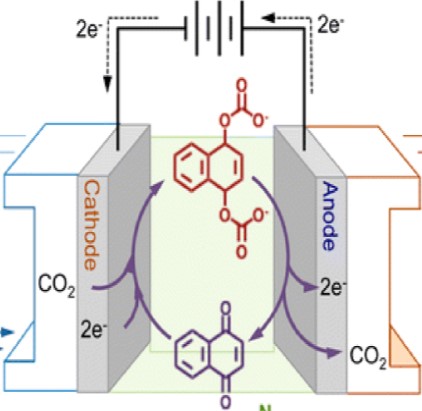 This article is a perspective from recognized experts in the field of CO2 capture and release.  It specifically focuses on molecular CO2 binding-release agents whose affinities can be controlled via electrolysis.  Where “electrolysis” refers to the use of electrodes and an externally supplied current source to drive the electron transfer (oxidation and reduction) reactions which control the affinity for CO2 by the binding-release agents.

The quantity of CO2 being released into the atmosphere is problematic due to its “greenhouse effect”, and human processes such as the combustion of fossil fuels are slated to release billions of metric tons of CO2 into the atmosphere each coming year. One

strategy for mitigating CO2 accumulation in the atmosphere is to capture CO2 at the point of generation before it disperses into the atmosphere.  This step would be followed by subsequent release of the CO2 into containment with concurrent regeneration of the capture agent.

Many approaches are being researched for CO2 capture and release , but none yet are energetically and financially feasible. Figure 1 provides a generic illustration of selective  CO2 adsorption/absorption from a power plant exhaust stream into a substrate, followed by a change in the external conditions to enable spontaneous release of CO2.  One specific benchmark system for CO2 capture and release, the ethanolamine process, is presented in Figure 2.  In this process, variation of the system temperature dictates the relative equilibrium concentrations of reactants and products, i.e. dictating the relative thermodynamic stability of CO2 in the “captured” and “released” state.    The most significant problem with the ethanolamine process is large amount of heat required to favor the release of the CO2.  It has been estimated that this process would  require ~30% of the electrical energy produced by a power plant!

The motif for CO2 capture-release agents promoted in this perspective is to utilize molecules that exhibit significant variations in their nucleophilicity upon being electrochemically oxidized or reduced.  In other words, the use of molecules in which their nucleophilicity can be effectively switched on and off electrochemically.  In theory, this electrochemical approach will enable the CO2 capture-release cycle to be much more efficient than a heat-driven cycle such as the ethanolamine process.  The basis for this approach is recognition that nucleophiles can form adducts with CO2  through

interactions at the electrophilic carbon of CO2.    Figure 3 exemplifies this process where upon being reduced, the phenanthrenequinone exhibits a strong nucleophilic center which forms stable adducts with CO2.  The larger size and ionic character of the adduct, relative to the starting materials, readily enables isolation and collection of the captured CO2. The release portion of the process relies on a significant reduction in nucleophilicity of the binding agent upon being electrochemically oxidized.  Where upon being oxidized, a  spontaneous release of CO2 occurs and the  agent is returned to a state such that the cycle can be repeated.

While the principle is clear, the problem with systems that have been characterized to date  (such as the phenanthrenequinone system of Figure 3) are many fold: slow kinetics of the redox reaction, a lack of selectivity for forming adducts with CO2, stability over thousands of redox cycles, etc.  (Add the problems here) This perspective does a fantastic job in presenting a significant societal problem that chemists are uniquely qualified to address: to design and synthesize water soluble CO2 capture-release agents that are selective for CO2 and able to form “Goldilocks” adducts with CO2 (i.e. strong enough to capture CO2, but not too strong such that the release process requires too much energy) that can be switched on and off electrochemically.