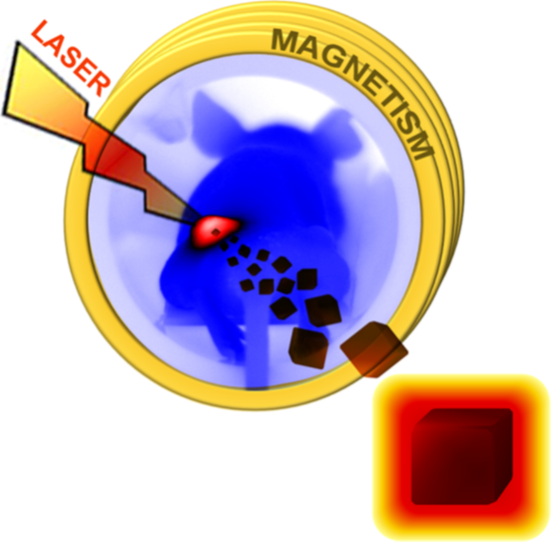 The mechanism of photothermal therapy was described in the previous post. Briefly, metallic nanoparticles (such as gold, silver, etc.) or even semiconducting carbon nanotubes are activated by near-infrared light (laser), where the absorption of tissues is minimal. The targeted tissues are heated to temperatures above 40C, and the tissues are damaged irreversibly.

Another method of activating nano-heating agents is via magnetism. In magnetic hyperthermia therapy, the exogenous agent, iron oxide nanoparticles, are activated by an alternating magnetic field. Magnetic therapy has several advantages over photothermal therapy. Firstly, it is possible to conduct multiple hyperthermia cycles; as there is no limit to tissue penetration in magnetic hyperthermia therapy. Magnetic agents, such as iron oxide are much more biocompatible than other metallic nanoparticles, and in fact, have already reached the clinic for the treatment of solid tumors and magnetic resonance imaging (MRI).

Iron oxide nanoparticles’ intrinsic properties to act as MRI contrast agents would allow us to follow their fate inside the body. It is found that the iron oxide nanoparticles are biodegradable and iron ions are assimilated by the body through a tightly assimilated physiological process. Based on these properties, one would assume that magnetic hyperthermia is obviously the preferred therapeutic technique. However, there are several setbacks in magnetic hyperthermia: the heat yield of iron oxide nanoparticles is low, meaning that a large dose of nanoparticles is needed to achieve a therapeutic temperature rise. This limitation can be partially overcome by tuning the architecture of nanoparticles (e.g. changing the shape from nanospheres to nanocubes), but the amount of dosage needed is still very high. The other inconvenience is that the heating efficiency declines when nanoparticles are taken up by cancer cells. This decline in heating efficiency again results in a higher dosage requirement for effective treatment.

To address these issues, Espinosa et al. take advantage of the fact that iron oxide nanoparticles can be used as both photothermal agents and hyperthermia agents. They begin by tuning the architecture of the iron oxide particles to achieve a higher heating yield. Then they expose the iron oxide nanocubes to both near-infrared laser irradiation and an alternating magnetic field. This dual exposure increases the heating efficiency of the nanoparticles by up to 15 times, resulting in a lower required dosage, reduced tumor growth, and a long-lasting thermal efficiency over repeated treatments. This cumulative heat therapy has been a promising method for tumor treatment with minimal collateral tissue damage so far.

Compared to photothermal therapy via metallic nanoparticles, dual-mode therapy (photothermal and magnetothermal) via iron oxide particles has a higher chance of gaining popularity in cancer therapeutics. As mentioned, iron oxide has been a commonly used agent in MRI and solid tumor treatment. If other factors, such as achieving an even lower required dosage, a lower power density, can be resolved, photo-magnetothermal therapy will be a monumental development in cancer therapy.