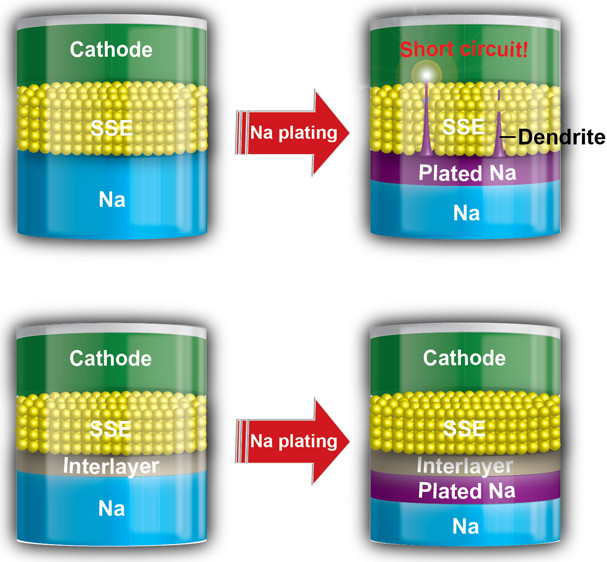 , and John B. Goodenough*

Publication Date : January 3, 2017
Electricity generated by photovoltaic solar panels has reached the pivotal point where it is now less expensive than generation by combustion of fossil fuels when the sun is shining.  Unfortunately “when the sun is shining” is a significant caveat because it implies that to further reduce use of fossil fuels for electricity generation, harnessed solar energy must be stored for use during times when incident sunlight is not sufficient.

Batteries can potentially meet this demand.  Thus lots and lots of inexpensive, safe, and efficient batteries are required, but current battery architectures all exhibit deficiencies in at least one of these aspects.   One property that scientists are particularly interested in is the enhancement of specific energy, i.e. the energy storage capacity per unit mass of battery.

A popular approach for attaining a significant increase in specific energy is through the employment of alkali metal electrodes – e.g. solid, metallic lithium or sodium.  The use of alkali metal electrodes represents a new paradigm in rechargeable battery chemistry relative to the ubiquitous alkali metal-ion batteries (e.g. lithium ion) currently employed in most of our mobile phones and electronics.  In short, Li-ion batteries do not contain any solid metallic lithium; they function by transport and intercalation of lithium ions into electrodes composed of carbon or silicon  – see the Wikipedia page for further explanation.

There is significant desire to employ Li(s) or Na(s) alkali metal electrodes in batteries because of the 10x potential increase in specific energy over current Li-ion solutions.  Thus far alkali metal electrode-based rechargeable batteries have not proliferated due to premature (i.e. too few charge-discharge cycles) and catastrophic (literally explosive)

failures.  As illustrated to the right, such failures are predominantly due to internal short-circuits caused by dendrites formed at the alkali metal electrodes during charging cycles.

Dendrites form in response to a spatially uneven flux of alkali metal ions reaching the surface of the electrode at which the ions are reduced to solid metal (e.g. Li+ + 1e- ↔ Li(s)).  To date, essentially all rechargeable alkali metal-based batteries have exhibited such detrimental dendrite formation because of non-uniform ion diffusion occurring in the solid-state electrolytes and poor wetting at the electrode-electrolyte interface.  While non-uniform ion diffusion is notorious in solid-state electrolytes, they are currently the only option that exhibits sufficient ion selectivity, mobility, and stability under the high voltages characteristic of such batteries.

With the goal of mitigating dendrite formation, this research essentially proposes the addition of a band-aid layer inside the battery that can correct for the non-uniform flux of ions reaching the electrode surface.  While significant improvements in homogenizing diffusion characteristics of solid-state electrolytes and improving the wetting at the electrode-electrolyte interface has occurred, in this work the researches essentially accepts these short-comings and implement an additional sub-nanometer interlayer (band-aid) between the electrode and electrolyte.  As illustrated

This report is significant in that it demonstrates through the addition of a sub-nanometer layer of material (specifically poly(2-methoxyethyl acyrlate) in this work) an entire genre of high specific energy battery materials (to-date considered predominantly impractical) are now potentially feasible.