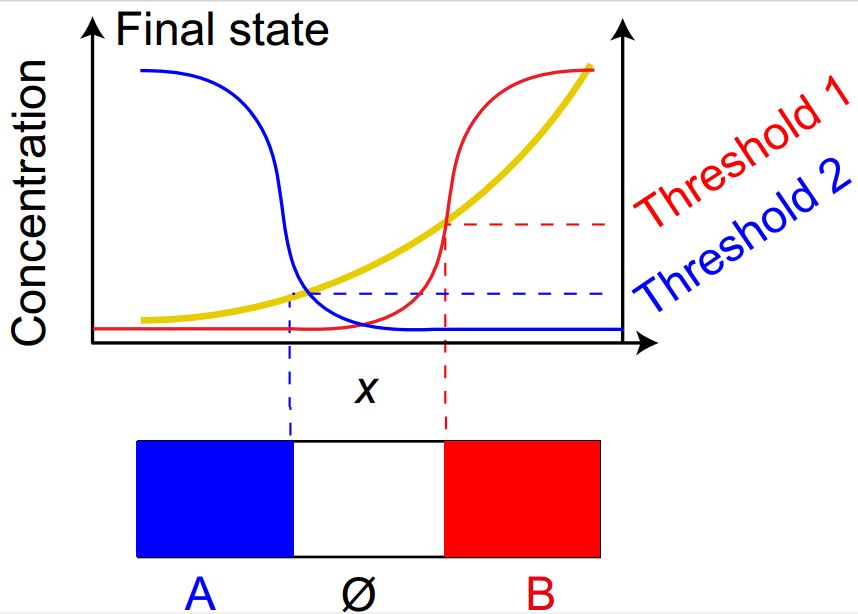 Title: Synthesis and materialization of a reaction–diffusion French flag pattern

From DNA to tardigrades, biology never ceases to amaze. It is not surprising in the least that discoveries in biology provide a lot of inspiration for chemists. One of the great wonders of biology and something that has challenged all of science for centuries is the formation of embryos; how does one cell autonomously become a complex organism? The secret is an embryo’s ability to form highly ordered concentration patterns that direct certain positions to react in certain ways. For example, certain cells become brain cells while other cells become liver cells due to their location within the embryo during early development. The authors here show that the same autonomous structure formation can be performed in non-living systems to create unique patterns including French and Polish flag patterns and a few larger scale patterns.

Autonomous structure formation means that the structure forms itself through chemical interactions without any outside interference. This means that the components must communicate using chemical signals. In biology, this mechanism is controlled by chemicals known as morphogens. A morphogen is a signaling molecule that has different effects at different concentrations on certain components within a system. For example, at high concentrations it could promote the formation of compound A, while at low concentrations compound B forms instead. The authors here form unique chemical gradients using fragments of DNA.

Figure 1 shows the simplest version of chemical patterning, where a single morphogen, TH, controls the formation of different strands of DNA, one labeled with a blue dye and the other labeled with a red dye. The formation of one type of DNA acts to repress the formation of the other, giving rise to a very distinct concentration difference depending upon the place where it occurs in the capillary. The formation is controlled by a template strand of DNA that reacts only with the red DNA, denoted as TH in the diagram, and the reactions are carried out by a constant concentration of specialized enzymes. The patterning experiments were performed in very thin glass capillaries, only 200 microns in width. The researchers also created a French flag pattern similar to the cartoon in the cover photograph.

Lastly, the researchers show that instead of attaching dye molecules to the DNA, it is possible to adhere the DNA to micron-sized beads to create the larger scale patterns shown in Figure 2. The extreme preciseness by which DNA-based signaling can chemically pattern a system is amazing. Using similar principles to those that guide embryos in early development to form different organs and tissues, this research could lead to artificial objects that are capable of patterning themselves into many different complex structures.

Do you think you could make your country’s home flag using autonomous structuration? Give it a thought.