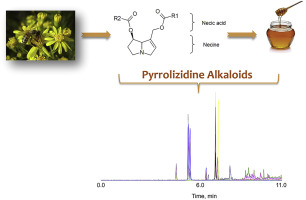 Title: A fast and simple LC-ESI-MS/MS method for detecting pyrrolizidine alkaloids in honey with full validation and measurement uncertainty

You are what you eat. Perhaps we want to be as sweet and pleasant as honey, but first we have to be safe with what we eat. We rely on testing methods as our guards, but how do we know if they are qualified?

Pyrrolizidine alkaloids (PAs) are naturally made in some plants to fight against plant-eating animals. They are found in honey when bees collect the contaminated pollen. In chemical terms, they are a group of amino alcohols with pyrrolizidine core, which are two five-membered rings with an nitrogen atom at the bridge head. Not all PAs are considered as toxic though, but those with double bonds in the 1,2-position (Figure 1). When absorbed into liver, they can be converted to reactive pyrroles, which could irreversibly bind to DNAs and RNAs and causing mutation or even cancer. Since studies have revealed the presence of PAs in animal tissues, the intake level of PAs has been of concern. The established maximum residue level is around 0.007 – 1 ppb.

Figure 1           Chemical structure of retronecine, a simple form in the PAs family

To find out how much PAs is present in honey, a simple sample preparation method with PAs extraction from water was proposed. But how could this method be formally recognised as a method? This has undergone a rigorous method validation process.

First of all, in order to claim the method was suitable for general types of honey, different kinds of honey has been tested. In this case, 20 honey samples have been tested against possible interfering substances. In tandem mass spectrometry, each PAs was identified by a pair of ion fragments appearing at a particular time interval with the instrumentation setup (such as the choice of solvents and chromatographic columns). Their ion ratios were evaluated against international standards to rule out possibilities of false positive or negative results. This determined whether the method was selective to any kinds of honey or not (Figure 2).

Second, the amount of PAs present in honey was quantified by a calibration curve. Therefore, linearity was the second criteria for method validation. The calibration curves constructed with solvents or with honey extract have been constructed, which have shown to fulfil the statistical criteria (e.g. correlation coefficient, r2 > 0.99). The peak areas of the ion fragments were then quantified as the amount of PAs in the honey sample.

Next, the robustness of the method has been verified by intentionally altering several parameters to test their effects on the method. The stability of the sample was also investigated by leaving the PA-added sample for particular time duration before analysed. Last but certainly not least, the measurement uncertainties were calculated and documented.

After all these criteria have been evaluated with international standards, the method was formally established. The authors have shown their method to be suitable for general commercial honey samples in Brazil, while presenting a thorough way of how a testing method has to be validated.