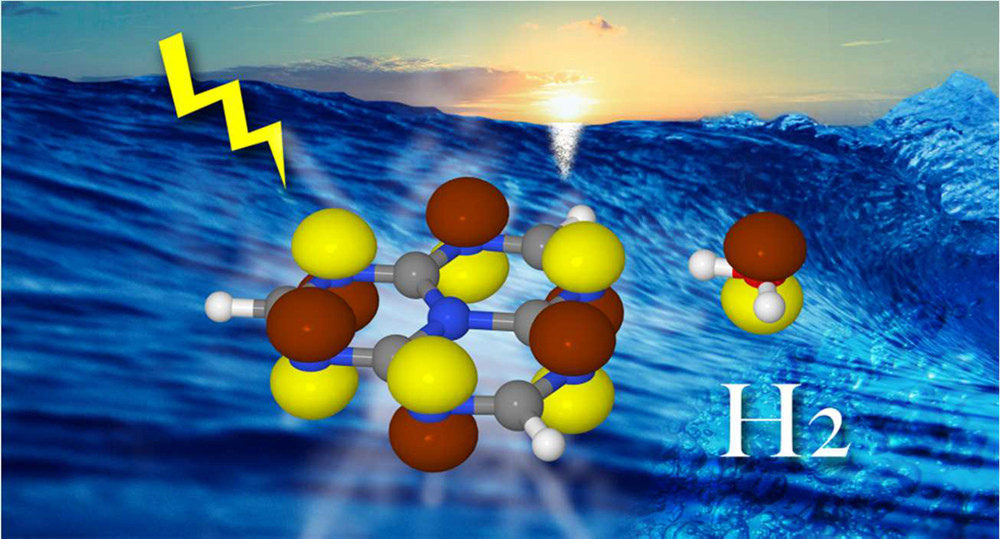 Having a delicious meal is always a fulfilling enjoyment. But for a chef, knowing how to prepare such an irresistible dish may be of more interest.

It has been observed in experiments that hydrogen can be formed from water in the presence of certain carbon nitrides compounds and light. However, the recipe for how such a reaction occurs has not yet been fully revealed. Here, with the help of computational power, the authors have made an attempt to unmask the mystical mechanism driving the water-splitting reaction.

First, let’s introduce the main characters of the reaction, water (of course!) and heptazine (a member of the carbon nitride family). The heptazine contains a pyridinyl nitrogen atoms on its sides, which favors the formation of hydrogen bonds with water molecules (Figure 1).

Figure 1 The calculated structure of heptazine–H2O complex with the hydrogen bond indicated by the dotted line.

Figure 2 Here shows the molecular orbitals involved in the lowest excited states of the heptazine–H2O complex at their relaxed state. The blue and yellow spheres indicate the electron densities localised on the molecules. The arrows indicate possible excitations. The blue arrow shows the charge transfer excitation between water and heptazine molecules.

Putting all pieces of puzzle together, the authors proposed the story as follows. When heptazine meets up with water, the nitrogen on the side of heptazine tends to form a hydrogen bond with the hydrogen of the water molecule (Figure 1). The situation is instigated by light of certain energy, breaking up the HO−H bond of water and resulting in a heptazinyl (heptazine−H) and OH radical. Two possible situations may then occur. First, when they are again subjected to light, the hydrogen atom could leave the heptazinyl radical and forms hydrogen molecule (H2) with another hydrogen atom. Second, when this is happening under the dark, the two heptazinyl radicals could recombine and yield a hydrogen molecule (H2) when subjected to a suitable catalyst.

The study has not only suggested a possible insider story of the water-splitting reaction with heptazine, but also demonstrated how powerful computational investigations can be in giving insights to light-driven reactions.