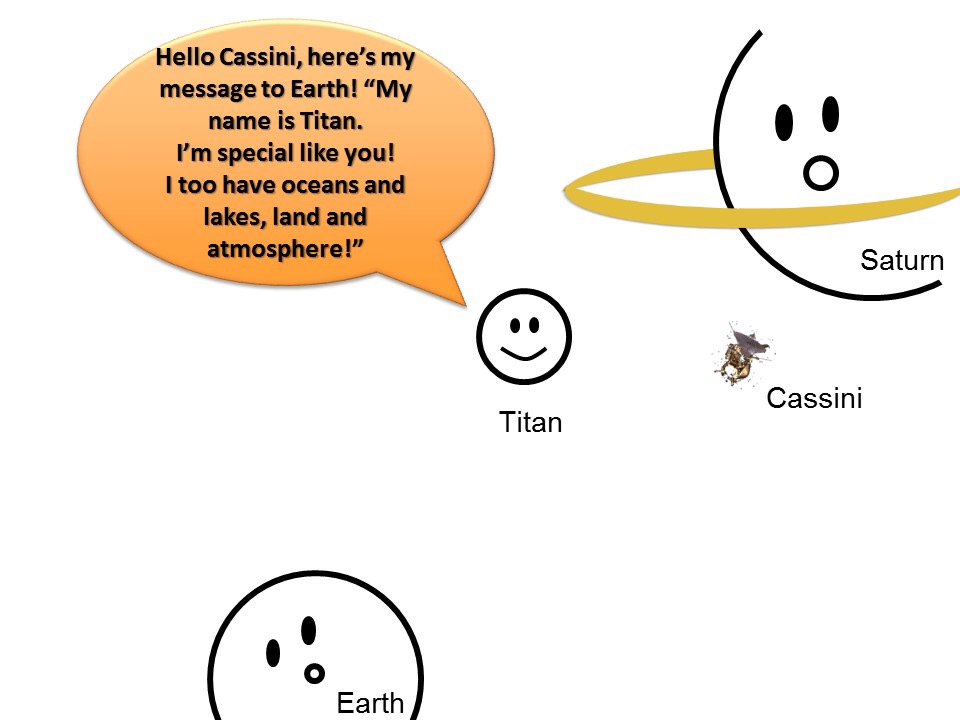 Finding Earth-like planets has been one of the goals in space explorations. The universe is so magnificent that somewhere exists a second Earth is not surprising. But it is not somewhere, it is right here within our solar system! And it is not a planet; it is one of the moons of Saturn, Titan.

These discoveries have been brought to us by Cassini, a spacecraft cooperated by NASA, ESA and ASI, which has just completed its mission on 15th Sept, 2017. It has been travelling in space for two decades, bringing to us groundbreaking discoveries in astrophysics as well as chemistry. In particular, Cassini has revealed a new crest for chemists, the fascinating chemistry in Titan (Figure 1). In celebration of Cassini’s grand finale, this bite features the discoveries of Titan’s chemistry as revealed by Cassini and its Huygens probe.

Figure 1         The schematic diagram of the Titan environment from its atmosphere to its core. [1] It highlights the processes happening in the atmosphere, lakes and surface of Titan. This rich chemistry shown here demonstrated a deep treasure of chemistry is awaiting to be discovered!

Why is Titan so special? First, Titan has oceans and clouds just like our Earth, but they are composed of methane and ethane instead of water. Second, it has a layer of crust, but unlike the Earth, this crust is constructed by water-ice instead of silicates. Third, Titan has an atmosphere with nitrogen as the major component similar to the Earth. Indeed, this atmosphere is the laboratory where tremendous chemical reactions take place (Figure 2).

Figure 2         The diagram shows what we currently know about the atmosphere of Titan and its comparison with that of our Earth.[2] The water clouds on Earth are replaced by methane clouds on Titan, and it is interesting to note a haze layer is covering Titan. This haze layer contains solid aerosols and hydrocarbons, which is the furnace of many organic materials found on Titan.

Similar to our Earth, the atmosphere of Titan can also be divided into roughly five layers (Figure 2). Instead of having water clouds, Titan has methane and ethane clouds. These methane molecules, together with nitrogen and hydrogen, contribute to greenhouse effect on Titan. This greenhouse effect warms Titan and thereby allowing the existence of methane and ethane lakes/oceans. On the other hand, there are also solid aerosols and hydrocarbons in Titan’s atmosphere. These organic mixture forms a haze layer covering Titan, which contributes to the radiation transfer and anti-greenhouse effect that keeps Titan freezing cold.

Scientists named the organic mixture in Titan’s atmosphere as Tholin. Back on Earth, Tholin has become a major topic in astrochemistry. The study of tholin can be classified into three areas: (1) observations and sampling of Titan’s atmosphere and surface (which was mainly achieved by Cassini and its spectrometers); (2) experiments to simulate Titan’s environment and reactions; and (3) theoretical and computational modeling of Titan’s chemistry.

To produce tholin on Earth, scientists have been experimenting with various energy sources, temperatures, pressures and the energy densities in tholin reactors. Although different energy sources employed in the experiments could yield different products, they all pointed to the conclusion that thiolin is a rich mixture of organic materials (Figure 3). For example, tholin generated by passing current through gas mixture (plasma discharge) could produce polycyclic aromatic and unsaturated hydrocarbons. On the other hand, UV radiation could yield benzenes and toluene, while electron beams could result in simple molecules such as ethane. It is surprising to notice so many organic substances present in Tholin. In particular, some experiments have even yielded amino acids and nucleotide bases, which are the fundamental blocks in living cells. These have prompted scientists to treat Titan as a prebiotic laboratory and probably the Earth before life.

Figure 3         These were the compounds produced in different tholin simulation experiments. The substances with names highlighted in red were those detected by Cassini-Huygens.

Even though Cassini’s mission has come to an end, human’s exploration on Titan is just a beginning. Cassini has not only brought to us new wonders of Titan, but also sprouted new explorations in chemistry. For instance, heterocyclic aromatic anions in the upper atmosphere of Titan have driven chemists to study the reactivity of nitrogen, oxygen, or sulfur-containing aromatic anions.[3] Another recent study has revealed that the number of aromatic rings in the trace molecule could result in different polymerization process of aerosols formed.[4]

Thanks to Cassini, we are looking forward to more exciting wonders in Chemistry!