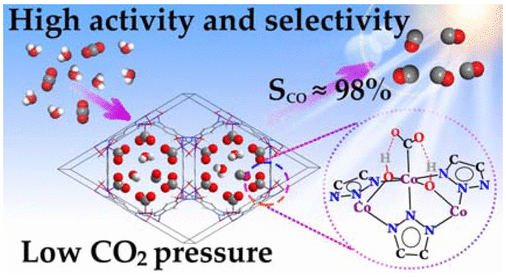 Who doesn’t like those fancy looking sports cars with intricate designs that are built to perform faster? Or, think about the structures that are designed to sustain the tallest buildings in the world. Just like these cars or buildings, we can engineer molecules to make them more efficient. Metal Organic Frameworks (MOFs) are really big molecular networks in which metal ions are connected by organic molecules to form a porous yet robust structure. Despite the porosity, these materials are exceptionally stable in most common solvents like water and alcohol, and at temperature as high as 200oC. Owing to their overall structural stability, the metal ions in the framework can rearrange adjacent atoms during a reaction without collapsing the entire framework. This property makes these molecules bind to other molecules and convert them to something else.

Because of their vast applicability in gas adsorption and gas storage, new MOFs are synthesized almost every day. But the so-called “structure-function” relationship is not very commonly explored in the field of MOFs. The work under this discussion attempts to do just that.

Let us first understand the structure of the MOFs and then we will go into the function part. In MOFs, multiple metal ions are often present as clusters where oxo (O) or hydroxo (OH) functional groups bind them to each other like a bridge (Figure 1). These groups are directly attached to the metal ions, and are called the coordination environment surrounding the metal center. The coordination environment in MOFs closely resembles the protein surrounding metal ions in natural enzymes. In most of the well-known enzymes, structure-function relationships are well studied. So what does this relationship mean? It means you will expect to see a difference in the enzymatic activity if the structure or composition of the protein surrounding the metal is changed. As we alter the amino acids constituting the protein in an enzyme, the metal might not bind to other molecules in quite the same way as before. And this affects the overall efficiency and selectivity of the enzyme.

Unlike enzymes, the structure-property relationship in MOFs has not yet been thoroughly explored. In the present work, the authors systematically altered the coordination environment around the metal in MOFs of similar structure and tested their efficiency for the reduction of carbon dioxide (CO2) to carbon monoxide (CO). Not only did they show small changes in the MOF structure dramatically changed catalytic efficiency, but some of these changes led to an unexpected benefit.

Let us now get an idea of how a MOF functions as a catalyst. Since we are interested in reduction of CO2 (adding electrons), we need to understand how MOFs can transfer electrons to CO2. MOFs often have a semiconductor property, which suggests that they can move the outermost electron to an excited state if provided with sufficient energy. This property is very attractive for using them as photocatalysts – catalysts that use light as energy to perform a chemical reaction. However, in many instances the MOFs alone cannot absorb the light directly to mobilize. So, scientists attach a “photosensitizer” to MOFs, which are dye molecules that absorb visible light very strongly and then transfer that energy to the MOFs. Thus it is a common to use MOFs as photocatalysts with added photosensitizers to convert small molecules like carbon dioxide and hydrogen.

An important feature of a practical catalyst is how easily you can make it at low cost. MOFs win again in this aspect. Unlike a majority of molecular catalysts that use rare, expensive metals, MOFs are made of cheap and abundant metals. For CO2 reduction in particular, cobalt metal (Co) has been shown to be quite effective to form carbon monoxide (CO). Therefore the authors chose a series of Co based MOFs that have similar structure and only differ by the atoms present in the metal’s coordination environment. Two of the MOFs under study contain OH and the other two contain Cl atom adjacent to the metal. The MOF containing “l” (MAF-X27l) is similar to MAF-X27, but with a bigger pore to facilitate better transport of CO2and CO and hence better catalysis. Shown in Figure 2 is the turn over frequency (TOF), which is a measure of how fast and effective a catalyst is. In this comparison, the TOF is higher for MOFs containing OH group than the ones containing Cl. In fact, their TOF is even higher than that of Co-ZIF-9 MOF, which held the record of the highest TOF value reported so far.

While changes in TOF were expected, this work also contained a surprise. The MOFs containing OH convert pure CO2 as well as mixture of CO2 and other gases (like regular air) with similar efficiency. This is truly exciting because all other well-known catalysts lose 90% of their efficiency when subjected to a lower concentration of CO2.

Another interesting aspect of this work is the chosen solvent. It is not often that you see water being used as the solvent for reduction of COWater can interfere with the desired reaction because the reduction of H2O to H2 competes with and inhibits the reduction of CO2. But the authors mention that water is crucial for the high efficiency of this reaction. To explain this, the authors suspect that OH and Cl-containing MOFs bind differently with CO2 and H2O. Indeed it was shown computationally that CO2 forms two strong hydrogen bonds with the two bridging OH groups in OH-MOFs, which leads to stronger binding of CO2 than H2O. Therefore, the water does not interfere with production of CO2 in this MOF, and the TOF is very high. On the other hand, in Cl-MOFs the Cl exerts repulsion towards electronegative O in CO2 (Figure 3). And so it binds H2O more strongly than CO2 and forms more H2, resulting in the lower TOF for CO production as shown in Figure 2.

Once the researchers established the importance of water during the reaction, the involvement of protons was further illustrated through monitoring the change in a proton’s location by deuterium substitution (isotope labeling). While subjecting MAF-X27-OD in H2O to similar catalytic conditions as the OH-containing MOF, infrared spectroscopy showed the conversion of OD to OH in presence of light. This indicates that H2O serves as the donor of protons (H+) that are exchanged with the H present in OH of the MOF during the reduction reaction. Based on these studies the authors proposed a catalytic cycle (Scheme 1) involving the co-operative interaction between Co atoms with the adjacent OH group to facilitate CO2 reduction selectively to CO with high efficiency.

Using all of the above-mentioned experiments, the authors have nicely established how the presence of H-bonding network between CO2 and OH in these OH-containing MOFs render superior efficiency for CO2 reduction. While this sort of mechanistic study in MOFs is not very common in the literature, the present work reports the structure-function relationship of the most effective Co containing MOF catalyst to date. These MOFs are not only very efficient and selective, but they are very stable and therefore recyclable over multiple rounds of catalysis. The methods used in this work will be truly beneficial to design better catalysts to convert CO2 into fuels such as carbon monoxide, formic acid, and methane, using abundant solar energy.