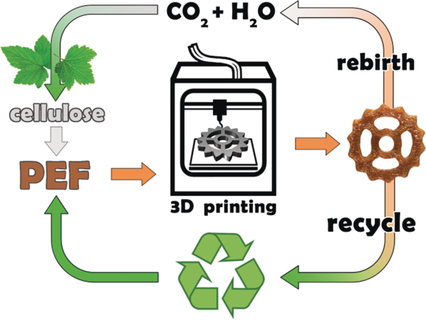 To this day, the most common 3D printing method is called FDM, fused deposition method: a plastic filament is uncoiled and melted through a hot nozzle. It is then deposited, it cools down and hardens to form layers (an example of this technique can be found at this link).

Is 3D printing starting the future?

We may not have the answer to this question yet, but the future, we know, has to be green: if on one side 3D printing could counter the globalization by avoiding the overproduction of goods (if everyone could just 3D-print the objects that he requires, the way factories operate would change), on the other side we cannot afford to keep using fossil-derived plastics with it.

Nowadays the most common polymers are either synthesized from fossil fuels or have very low resistance to organic solvents.

The authors of this paper developed a method to synthesize poly(ethylene-2,5-furandicarboxylate) (PEF) -a very green and resistant polymer- from cellulose -a literally green starting material(Figure 1).

Cellulose is, in fact, a polymer of D-glucose and composes the cell wall of the plants. It is formed during the photosynthesis from H2O and CO2, using solar light as the activator. It is as green as it can be!

The synthesis of PEF, that was carried out in 4 main steps, led to the production of the polymer with a high yield (97%) in the form of a white powder. The coiled filament was then produced by melting the powder in an oven and shaping it to a standard diameter.

Compatibility and versatility of the polymer were demonstrated by 3D-printing different objects with pre-existing printers and standard methods. Its chemical resistance was proved by immersing the printed objects in dichloromethane (DCM) for several hours. In Figure 2, these results are compared with other polymers more commonly used ( i. e.  PLA, ABS, and PETG). A small metal ball is on top of a 3D -printed cylindrical object that is immersed in DCM. When the polymer melts, the ball drops. PEF resisted more than 24 hours versus the 500 seconds of the other polymers. Figure 2: Resistance test of 3D-printed cylinders in DCM. Among the tested polymers, PEF resulted to have the highest resistance to chemical corrosion.

The polymer is also highly recyclable. It can be melted at 250° C and re-used after being re-shaped as a filament. This means that any unwanted object can be turned into a new shiny one, perfectly illustrating the idea of recycling.  It can undergo many cycles of 3D-printing and melting without losing the qualities that make it chemically interesting.

We don’t know if 3D-printers will actually trigger the third industrial revolution, but we know that every third-millennium revolution has to be sustainable. This paper and this polymer could lead 3D-printing to its future, making it green and bright!