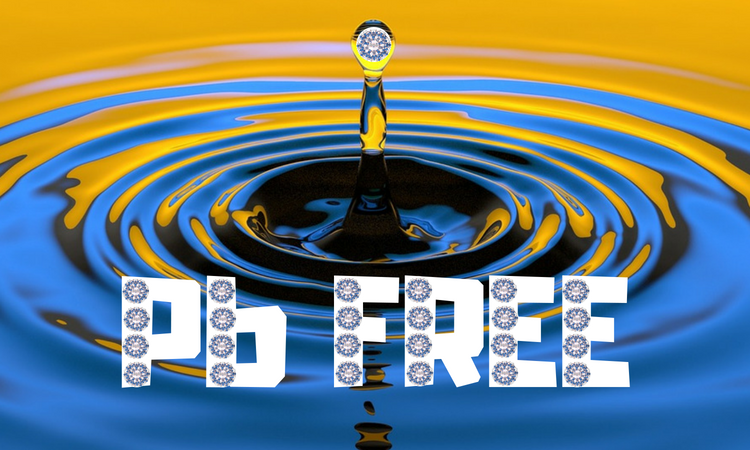 Featured image and figures used with permission from Sun et al. via ACS AuthorChoice open access. Featured image has been modified from the original.

Four years ago, due to a change in water sources and treatment plants, residents of Flint, Michigan observed a stark change in their tap water. After two tumultuous years, a comprehensive study confirmed what residents had long suspected: the city’s pipes were leaching large amounts of lead into their water. Despite the urgent need for water free from lead, today only a third of the affected pipes have been replaced, and many residents are still afraid to drink from the tap.

Why isn’t lead contamination an easy problem to fix? A part of that answer is in the lead pipes and paint we’ve used in our infrastructure up through the 1970s and 80s – these sources of contamination need to be replaced, but replacement isn’t cheap or quick. The other answer lies in designing a way to remove lead from already contaminated water quickly, efficiently, cheaply, and without producing too much waste. Materials that absorb lead – essentially a filter – could hit these marks if only they could absorb a bunch of lead in a small amount of material, and be regenerated (by removing the lead), and used again.

This is a tall order, but hope is in sight. A recent study by researchers from École Polytechnique Fédérale de Lausanne and UC Berkeley demonstrates the first cheap, highly effective, and fastest water filtering material for lead to date. Their metal-organic framework/polymer composite facilitates nearly instantaneous removal of almost all lead from water contaminated at a level 6 times greater than the EPA-established limit (15 parts per billion), bringing it well below safe drinking levels (Figure 1). Though preliminary, this technology could provide much-needed lead remediation to economically poor communities, like Flint.

The researchers found that the same material also restored mercury-contaminated water to drinkable levels (again, removing almost all the heavy metal ions), and had a more limited effect on samples contaminated with arsenic and cadmium. Remarkably, the presence of other metal ions commonly found (and desired) in drinking water, such as sodium and calcium, did not interfere with the removal of heavy metals.

The metal-organic frameworks (MOFs) used in this study are able to stop lead in its tracks because of the polymers decorating their surfaces. These polymers, made of several dopamine molecules linked up into a long chain, extend like a forest of seaweed from the surface of the MOF and trap any heavy metal ions that happen to float by with their catechol and amine functional groups (Figure 2).

When levels of lead are high, many “sites” for ions to trap in are needed to effectively clean the contaminated water. This is where the MOF structure shines – as highly porous materials, MOFs are made of channels and pockets that create a huge amount of surface in a very small volume. The polymer, polydopamine (PDA), polymerized directly to the surface, was also densely packed, adding to the porosity of the structure and making a large number of sites that can trap lead.

Furthermore, the MOF used is made from iron oxide (Fe2O3, shown in Figure 2 as blue diamonds) and 1,3,5-benzenetricarboxylate, which is biologically and environmentally friendly. Based primarily on iron and carbon, it is also exceedingly cheap to make. It also appears to be very stable and can be reused – up to at least four times without losing effectiveness.

Another huge benefit of using MOFs is their small pore size. In many other highly porous materials, like charcoal, the pores let large organic molecules in, which then stick to the material’s surface and never let go – a phenomenon known as “fouling.” But with pores ~5-9 Ångstroms across, not many unwanted molecules can wander into this MOF’s pores, only the desired metal ions. MOF/polymer composites tested alongside a well-known fouling agent (humic acid) regenerated easily over four cycles.

To really put their magic material to the test, the researchers used it on a sample of wastewater from a treatment plant in Switzerland. As opposed to lab studies, this real-life sample contained a whole complex host of molecules, ions, and particles that might interfere with the MOF/polymer composite’s job. Spiking the sample with 700 ppb of lead and then soaking with the MOF/polymer composite, the lead uptake was slightly slower, but still brought the lead to a safe level – within a minute 70% of the lead is removed, 90% is removed within the hour, and 99.8% is removed in 24 hours.

Successful implementation of a filter material as a water treatment technology will need a complete evaluation of many factors – stability, recyclability, rate of removal, resistance to fouling, selectivity, and probably most important, cost. Despite a full evaluation, the record-breaking removal rates of lead and mercury with this MOF/polymer composite makes it a promising next-generation water filter. Future studies at larger scales with real wastewater will hopefully begin soon – communities around the world need this technology, and honestly, they need it yesterday.