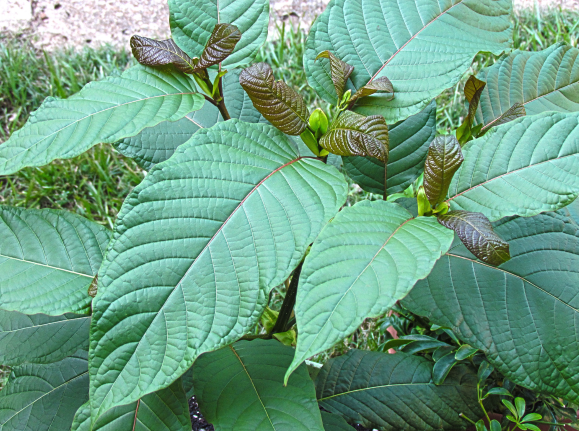 Cover Image: Reprinted under CC BY 3.0 liscence from ThorPorre on Wikipedia

Title: 7-Hydroxymitragynine Is an Active Metabolite of Mitragynine and a Key Mediator of Its Analgesic Effects

In the last decade or so, kratom (Mitragyna speciosa) has made the leap from a traditional medicinal plant in Southeast Asia to an easily purchased herbal supplement in the U.S., marketed in various forms including teas and gums. It has gained popularity for helping opioid addicts reduce or even completely stop their use of prescription opioids. Somewhat like nicotine patches for smokers, kratom users have reported that the herb helps them wean off the more dangerous drugs they are taking. In addition, users have reported relief for physical pain as well as mood and anxiety disorders.

The problem with this is that kratom is technically an opioid. It acts on similar receptors in the body as morphine but usually produces milder effects. Thus, intense controversy swirls around this herb because it is the only legal, unregulated opioid in the U.S. Several government agencies including the Food and Drug Administration (FDA) and the National Institute on Drug Abuse (NIDA) have issued warning statements about kratom. In fact, the US Drug Enforcement Agency (DEA) attempted to have the herb banned in 2016, only failing due to loud public outcry.

All these warnings stem from the fact that kratom has not been thoroughly and scientifically studied. Although its potential active compounds are known, how they act in the body is not well understood. Thus, it is difficult to do a proper risk analysis on the use of kratom. With reports of addiction and withdrawal symptoms, as well as at least 44 deaths linked to kratom identified by the FDA, a much more thorough investigation of kratom is certainly warranted.

Kratom is known to contain two active chemicals that can interact with opioid receptors: mitragynine and 7-hydroxymitragine (7-OH) (See Fig. 1). These two compounds are very similar in structure, identical except for the addition of an extra oxygen atom in the 7-OH compound, but they can produce very different effects. The 7-OH molecule is known to be 10 times more potent than mitragynine when tested in its pure form in the lab, but 7-OH is found in such low concentrations in the kratom leaf that the Columbia University scientists initially did not think it had much to do with kratom’s effects. Thus, they began by concentrating their efforts on mitragynine.

However, the researchers soon realized that things weren’t so clear cut when they moved to animal studies. Their first tip-off was the unusual observation that mitragynine was more effective as a painkiller or analgesic when it was fed to lab mice instead of injected (See Fig. 2). Typically, injection is a more effective route of administration because the drug can go directly to the bloodstream. This observation suggested that mitragynine has to be metabolized or processed during the digestion process in order to make it more potent. 7-OH, on the other hand, was more potent than mitragynine both when fed (p.o.) or injected (s.c.).

Mitragynine is known to be metabolized to a few different variants (see molecules 1, 2, and 3 in Fig. 1 above) but all of them were less potent than mitragynine, so they wouldn’t make sense for explaining this observation. The researchers instead decided to investigate if mitragynine could be converted to 7-OH in living organisms. This conversion had never been observed before, but even if just some of the mitragynine was transformed to 7-OH, it would definitely increase the effects since 7-OH is so much more potent. After some careful screening, the researchers discovered that a liver enzyme found in mice and humans called CYP3A was capable of forming 7-OH from mitragynine. They confirmed that this happens in living organisms as well by treating lab mice with pure mitragynine and taking samples from the blood plasma and brain an hour later to see if they could detect 7-OH. Sure enough, they discovered that the amount of mitragynine in the samples decreased, but 7-OH was detected in increasing concentrations (Fig. 3). These concentrations were found to be enough to cause all the analgesic effects that the researchers were observing in the mice.

Thus, the scientists concluded that when kratom users chew or ingest kratom leaves, the painkilling effect that they feel is not coming from the main compound, mitragynine, itself, but from the small amounts of 7-OH that is formed from mitragynine in the liver (Fig. 4).

This discovery is crucial for the future of kratom because it sheds light on not only how it works, but a potential danger that had not been known before. Since it is now known that kratom needs to be digested and metabolized by the enzyme CYP3A before it can exert its analgesic effects, it makes more sense why kratom can behave as an opioid but lead to comparatively few overdose deaths. The amount of the actual active compound (7-OH) taken in by a kratom user is controlled by how much of the mitragynine from kratom can be processed by the CYP3A enzyme. If the enzyme processes the mitragynine fairly slowly, it essentially turns mitragynine into a slow-release drug: gradually producing 7-OH as the mitragynine gets sent to the liver. Even if a user would take in a huge amount of mitragynine, only a small amount would get processed to 7-OH and interact with the opioid receptors. However, this also means that kratom will have a variable effect depending on the individual user. If a person happens to have much more CYP3A enzyme than the average person, taking a “normal” dose of kratom may actually produce a much higher amount of 7-OH, potentially leading to dangerous side effects and overdose. This is very similar to codeine, where individuals that have mutations in another liver enzyme can be much more or less sensitive to the drug, depending on if there is more or less active enzyme.

In conclusion, there still remains much to be known about kratom. However, thanks to the Sames Group researchers at Columbia University, we have made big steps forward in understanding its mechanism of action. This information will be crucial in regulation decisions and the development of future therapeutics.

Chelsea is a PhD Candidate in Chemistry at the University of Illinois, Urbana-Champaign. She enjoys learning, community service, and bunnies!