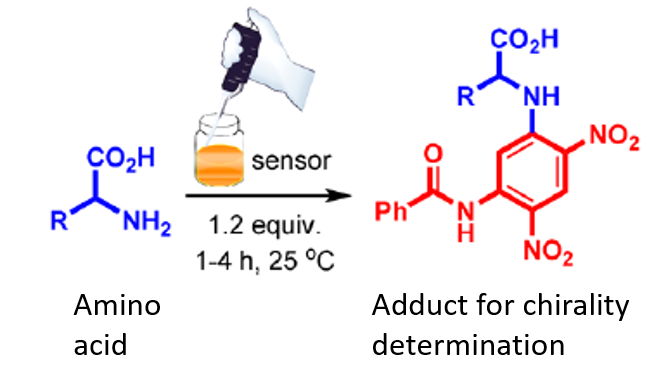 Proteins are one of the primary building blocks of the body along with other biomolecules, such as carbohydrates and lipids. Protein molecules consist of small amino acids linked together covalently by peptide bonds. There are 20 different naturally occurring amino acids with a diverse range of properties (hydrophobic vs hydrophilic, acidic vs basic) which help create proteins’ structural and functional complexity. Evidently, structural alteration of amino acids can have a profound impact on the macro scale properties of protein molecules. Each naturally occurring amino acids (except glycine) contains a stereocenter i.e. one carbon which has four different groups attached to it. Variation of the spatial arrangement of different groups around that carbon can  result in S- or R-amino acids, which are called stereoisomers to one another.

The extensive use of S– and R-amino acids in chemistry, biotechnology and biological sciences prompted researchers to develop methods that allow quantitative analysis (i.e. exact amount of S- or R- amino acids) of the amino acids in a solution. Researchers from Georgetown University discovered a practical sensing assay to determine the different configuration of stereocenters (i.e. different spatial arrangement leading to S- or R- type amino acid) of amino acids, whether one stereoisomer is present in excess over the other one if both are present and by how much. Not only amino acids, but this technique is also equally potent for other types of molecules such as amines and alcohols.

Researchers at first synthesized a small achiral molecule (2) that can attach to the analyte (e.g. amino acids, biothiols, amines etc.) resulting in a complex. The properties of this complex can be measured using photophysical techniques such as UV-Vis or CD spectroscopy to determine the initial configuration of the analyte (Figure 1). It was observed that when 2 interacts with S-amino acids it produces opposite signal as compared to the signal formed through interaction of 2 and R-amino acids. In this way, two different stereoisomers (S– and R-) could be identified easily as evident in figure 1b .

Having developed a qualitative method for analyzing the stereocenters, researchers moved to quantitative analysis using intensity of CD signals. Researchers used a non-racemic analyte mixture (where both stereocenters are present but one is in excess to other) and observed that with increasing concentration of one stereocenter, CD signal intensity increases. They found correlations between enantiomeric excess and CD signal of the amino acids, either linear or non-linear depending on the particular amino acid. For example, aspartic acid and glutamic acid showed a non-linear effect whereas other amino acids showed linear effects (figure 2).

Other biologically relevant molecules such as aromatic and aliphatic amines and amino alcohols could also be analyzed using this method. CD signals showed opposite handedness with opposite stereocenter of the analyte, which proved the generalization of this method beyond amino acids. Accurate quantitative analysis of most of the substrates was also carried out to demonstrate the utility of the method.

This small molecular probe to identify the stereocenter of different analytes have immense importance for several reasons. First of all, the probe is inexpensive and easy to make using commercially available starting materials. Secondly, the sensing method is operationally simple and can be used effectively in UV/CD plate readers that are used for high throughput screening in industrial sectors. However, this method is of course not free of limitations as the analyte has to react with the small molecular probe, which can turn out to be the bottleneck for several other analytes. Overall, these efforts can provide a stepping-stone for the development of next-generation sensors.