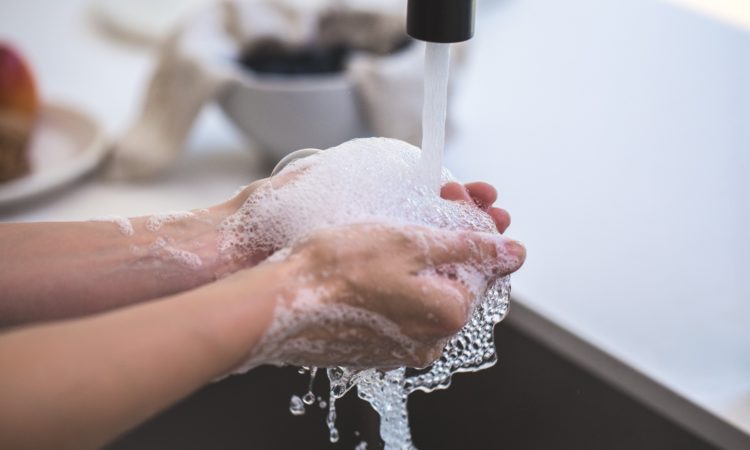 Proteins are the backbone of the molecular world; little machines that synthesize biomolecules like lipids and nucleotides, perform multitudes of chemical transformations, and create the energy that powers our body. Scientists estimate about 20-30% of our proteome (all the proteins our body produces) are membrane proteins while the rest are water soluble. Soluble proteins are present in the cytoplasm and, isolated outside of the cell, are stable to work with in innocuous liquids like water. In contrast, membrane proteins are anchored to or integrated into the cellular membrane (Fig 1) and are much more difficult to work with.

The cellular membrane is a lipid bilayer that sandwiches together so that the hydrophilic (water-loving) parts of the lipid face the outside or inside of the cell, and the hydrophobic (water-hating) parts are buried together and protected from water molecules (Fig 1 insert). Membrane proteins cannot perform their biological function when untethered from the membrane, mainly due to their hydrophobic nature. Instead, they would aggregate (clump together) like oil droplets join together in water, causing a loss of their enzyme activity.

This inability to function (or even be stable) outside of the membrane presents great analytical challenges for isolating the protein and analyzing its structure. Understanding a protein’s structure is vital for answering fundamental questions of function (such as: How does this protein work? What does it work on?) that can lead to targeted drug design to combat diseases while limiting off-target side effects.

The first successful method to isolate membrane proteins for structural analysis originated in 1985, when a German team used a detergent (lauryl-dimethylamine-N-oxide) to stabilize a membrane-bound reaction center. Detergents are chemical compounds that contain a charged headgroup (either positively charged, negatively charged or neutral) and a long hydrophobic tail – similar to a membrane bilayer! And indeed, the detergent protects the protein in a way that resembles the membrane, by forming micelles in solution to stabilize both the hydrophobic and hydrophilic parts of the amphiphilic protein.

Since then, protein-detergent complexes have dominated the methodology of membrane protein structural analysis. However, most structures submitted the Protein Data Bank (the foremost archive of the 3D structures of proteins) since 1985 remain predominantly soluble proteins, indicating further analytical challenges for membrane proteins.

One of these is the limited options for detergents. Most scientists use non-charged detergents like n-dodecyl-b-D-maltoside (DDM), but many mammalian proteins isolated with this detergent lost their structural integrity. Sadaf et al., led by Dr. Pil Seok Chae at Hanyang University, wanted to synthesize new detergents that could widen the analytical capabilities of the scientific community.

The team noted that the literature’s latest advances of detergent synthesis focused on adding multiple headgroups and branching chains. As such, Sadaf et al. began with a six-carbon sugar called scyllo-inositol as the core of their detergent molecules, with either maltose or glucose sugar residues as the neutral head groups linked multiple times with or without a longer linker molecule (ethylene glycol or glycerol). The scientists further synthesized multiple chain lengths on the tails to probe the optimal balance of hydrophilic head/hydrophobic tail, resulting in ten different compounds (Fig 2).

These amphiphilic compounds organized remarkably differently than other detergents. The sugar head produced micelles with fewer gaps between the head regions, and the bulky chains packed more efficiently in the bilayer space, resulting in high hydrophobic density. This greatly increased the number of detergent-protein interactions, necessary for stabilizing more sensitive biomolecules. In addition, the scyllo-inositol core is incredibly rigid, creating firmer micelles likely to enhance crystallization of membrane proteins. Characterizing the ten compounds found a variety of micelle sizes and shapes competitively advantageous compared to the standard DDM.

Sadaf et al. then evaluated their detergents using a well-understood membrane protein center (LH1-RC). As the structure degrades, the protein’s characteristic absorbance of light at the 875 nm wavelength. The scientists constructed a time course of 30 days, where every ten days they increased the temperature by 10°C, starting at 25°C (room temperature) and ending at 45°C. LH1-RC in the traditional detergent DDM lost 50% structural integrity within the first week and lost it all by the end of 20 days. In contrast, seven of the ten new detergents preserved 90% of the LH1-RC’s structural integrity after ten days, and at the end of the time/temperature course, all the new detergents retained above 60% of the protein’s structural integrity (Fig 3a).

Sadaf et al. also evaluated their detergents’ effects on membrane protein activity with a membrane bound leucine transporter (LeuT). Over a period of 14 hours, the LeuT retained significant activity in nine of ten novel detergents (some detergents showed no more than 50% loss after 14 hours – shown by the dark blue, light blue, and orange lines) compared to DDM, which showed almost 50% loss of activity within 4 hours (Fig 3b). Finally, the scientists evaluated a mammalian protein, a G-protein coupled receptor, but found no significant difference in protein stability or activity between DDM and their detergents.