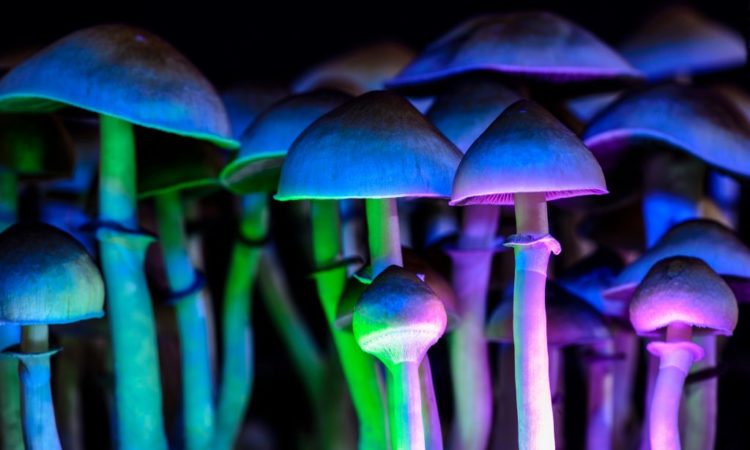 Microorganisms, plants, and fungi possess incredible assemblies of biomolecular machinery that allow them to fabricate metabolites of immense chemical diversity. Historically, many of these molecules have proven exceptionally valuable for us. For instance, penicillins – the square-looking small molecules synthesized by the Penicillium fungi – serve as antibiotics up to this day (Figure 1); and taxol – a bewilderingly complex molecule made by the bark of the pacific yew tree – is used to treat a variety of cancers (Figure 1B).

In other instances, these metabolites can find more… controversial roles in our society. Such is the case of psilocybin (Figure 1C), an alkaloid molecule made by the psilocybin fungi, also infamously known as magic mushrooms. Psilocybin is a Schedule 1-controlled recreational drug with hallucinogenic and mind-altering effects similar to those of LSD, mescaline (peyote), or DMT (ayahuasca). However, a wave of current research is suggesting that psilocybin could find therapeutic use in the treatment of psychiatric disorders like addiction, depression, or OCD. This notion, in turn, has fortified research interest in the biosynthesis of this alkaloid. Not only is it fundamentally interesting from a discovery point of view, to elucidate the chemistry with which these mushrooms build psilocybin. It is also important to characterize which genes and enzymes are involved in the process to engineer them to arrive at psilocybin-like products with more desirable therapeutic properties.

In this research, the lab of Jing-Ke Kang at MIT identified and characterized one of the enzymes in this biosynthesis, an enigmatic decarboxylase called ncAAAD that kickstarts the making of psilocybin.

To give the reader some context, the biosynthesis of psilocybin is presumed to happen as shown in Figure 2. First, the amino acid tryptophan (1) is decarboxylated by this elusive enzyme to generate tryptamine (2). From here, the enzyme PsiH adds a hydroxyl group to the indole backbone to yield the oxidized product 3, which is phosphorylated by PsiK to give to compound 4. The final step toward psilocybin involves PsiM, an enzyme that adds two methyl groups to the appending amine, and voilà.

In order to identify the enzyme responsible for the first decarboxylation step, the group relied on computational tools to analyze the genome of magic mushroom P. cubensis and were able to identify a candidate decarboxylase enzyme that they named ncAAAD. They then rely on established molecular biology techniques to purify the protein and test its presumed activity. They indeed find that ncAAAD can convert tryptophan (1) into tryptamine (2) in vitro, as well as mediate the decarboxylation of other aromatic amino acids like tyrosine and phenylalanine. In vivo, they observe that yeast cells engineered to have large amounts of ncAAAD produce a lot of these decarboxylated products, confirming the activity of the enzyme inside cells as well.

Having a thorough understanding of the enzyme’s structure allows for a deeper appreciation of how it functions. Thus, the bulk of the paper is then devoted to study and probe the structure of . The authors were able to obtain crystals of the enzyme and solve its high-resolution x-ray crystal structure (Figure 3), and I encourage you to look at the original research if you are looking for more details. One of the most revealing findings is the existence of a regulatory element in the C-terminal region of the protein. The group could verify that calcium binding to this domain increases enzymatic activity, thus establishing an unusual modulation mode not observed before in enzymes of this type.

project, although still at its initial stages, nicely showcases a broader theme in scientific research. It demonstrates how fundamental understanding of an enzyme’s structure underpins our ability to highjack its chemistry to produce drugs such as psilocybin for therapeutic use