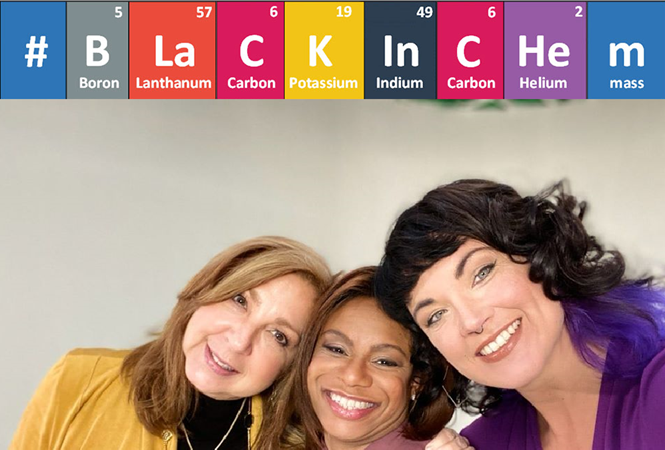 There is nothing anyone can do to stop Ashley Walker.

And quite frankly, they shouldn’t be trying, anyway. This thought strikes me over the course of my time spent talking with her about her experiences and her research. Though there are many ways to describe her—dedicated researcher, passionate scientist, fearless activist—the best way I can describe the force of nature that is Ashley Walker is ambitious, driven and determined.

In pre-pandemic days, maybe my conversation with Ashley could’ve been done in person in her hometown of Chicago; but this interview proceeds through Zoom. Bathed in the morning sunshine, Ashley relays to me her delight regarding a congratulatory message actor Michael B. Jordan tweeted in support of her recent internship presentation at NASA’s Goddard Space Flight Center.

For the record—I agree with Ashley that he would make an excellent future ex-husband/baby daddy.

As a little girl, Ashley loved space. Living in Chicago, the Adler Planetarium was instrumental to her growth as a scientist. Perhaps because a young family member is nearby talking princess costumes, Ashley is reminded of her childhood. She tells me with a nostalgic laugh, “I wanted a telescope for my birthday. I was a weird kid, though. In fact, I wanted to be the Moon for Halloween!” Her propensity for going off the beaten path hasn’t changed since: When you study chemistry, you get groans of “Oh I HATED chemistry” from most crowds. When you study physical chemistry, like Ashley is, you get cries of “Why? Physical chemistry is so hard!” from almost everyone else.

Today, Ashley is a prominent voice on STEM social media. She’s the founder of #BlackInAstro, a yearly highlight of Black astronomers in different stages of their science careers. This was almost certainly the inspiration for several other similar hashtags, and this year, Ashley is a co-founder of #BlackInChem. But if you had asked her 15 years ago where she thought she would be, you’d get a very different answer. She initially started college with goals of becoming a choreographer and owning her own business. Having grown up in a time in which the light was being shone on gun violence—and having personally faced tragedies because of it—she became inspired to showcase how being a dancer and getting kids involved in productive activities could prevent such violence. In many ways, this desire to be a role model pushes Ashley forward.

Things changed in her career trajectory when one day, while babysitting, she caught an episode of Criminal Minds. “I said… I could do that! I can do forensic science.” Shortly after deciding on forensics, she changed her major. In 2015, she won the Chi Sci Scholarship for incoming students at Chicago State University, which would propel her towards her career goals in an unexpected way. While exploring research options, Ashley found the NASA Space Grant Consortium. “I thought it’d be so cool to do an internship at NASA,” she says with a grin. The fact that she’s telling me this specific story during the same summer she’s interned at NASA is not lost on us.

It was not all smooth sailing in 2016-2017, however. During the time Ashley began the process of finding placement for a summer REU, her father passed away. To add insult to injury, she was also mistakenly declared dead by the social security administration and had to work to get that resolved. However, despite all these overwhelming circumstances, she managed to secure two internships, before choosing one at the Harvard University Banneker Institute studying protoplanetary disks. “I was so burnt out. I wasn’t able to properly grieve until later. It really took a toll on my mental health and that’s a part of why I’m an advocate, especially for students of color, to be aware of what’s happening to our mental well-being, and that it’s okay to take a break.”

2018 saw her at Johns Hopkins University working on and defending her senior thesis on Venus and Saturn’s moon, Titan. The unique combination of her studies as a chemist and research as an astronomer awarded her the distinct degree of “Bachelors of Science in Chemistry – Astrochemistry emphasis” from the Chicago State University.

At a time in which Black people make up less than 10% of the US STEM workforce (NSF, 2015)1, Ashley Walker is working hard to highlight Black scientists and other scientists of color. She’s fully aware that her actions today, in creating visibility of Black scientists, will create role models for a better future. Ashley’s future plans involve getting her PhD in planetary science, chemistry and/or astronomy. Not only does she plan to work at NASA, she and two other scientists of color—astronomers KeShawn Ivory and Elizabeth Gutiérrez–plan to open a people of color planetarium. She hopes to co-found a degree-granting institution emphasizing the work of Black and brown scientists while creating a new generation of scientists of color.

Despite the many obstacles in her career path, Ashley remains unstoppable, driven by her desire to show what she’s capable of and her desire to be a role model for other Black and brown people. True to character, when I ask what piece of advice she wants to give, she says this:

“My struggles have been the driving force of why I’m here today. My advice is as long as you know what your driving force is for your efforts, I say just go for it and don’t stop.”