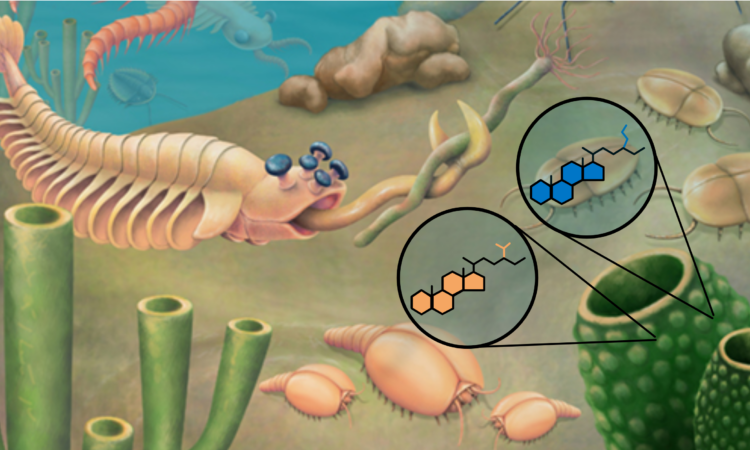 Until 540 million years ago, life on Earth looked nothing like it does today. This period, known as the Cambrian Explosion, saw the greatest diversification of animal life in Earth’s history. Rocks from this time onward are littered with fossils for paleontologists to study. Casts of shells, imprints of swimming predators, and traces left behind in sand as creatures crawled across the ocean floor paint a detailed picture of how animal life has evolved since the Cambrian Explosion. But what about before this time? When did the first animal truly appear on Earth? This is the question that motivates the authors of this study in Nature Ecology & Evolution.

Evolutionary biologists believe that animals began roaming the Earth sometime between 635 and 900 million years ago, yet the oldest animal fossil is only 560 million years old. This leaves a significant gap between the first animals on Earth and their appearance in the fossil record. How do we understand when animals evolved if we have no fossils to examine? Fortunately, the authors of this study don’t read the Earth’s rock record in the same way as the paleontologists in Jurassic Park. They don’t look for fossils with the naked eye. They search for “molecular fossils”.

Don’t let the name fool you, Bobrovskiy et al. are not looking under a microscope for tiny imprints of molecular structures. To understand a molecular fossil, think of every time you threw a banana peel out the car window into the woods or grass and said to yourself, “it’s biodegradable!”. Once that peel hits the ground, microorganisms start breaking it down piece-by-piece, molecule-by-molecule until there is nothing left. Except, there is! Some organic molecules built into the cells of all life are not “biodegradable”. They cannot be broken down. Instead they remain in the soil or sediment, where they are buried, heated, and compressed until, over millions of years, they become part of the rock record. Throughout this process, molecules are stripped of their nitrogen and oxygen atoms, leaving only their carbon backbones, much like a dinosaur decomposing until all that we find is its skeleton. And just like identifying dinosaurs, certain molecular skeletons can be traced back to the organisms that produced them based on their unique chemical structures. These molecular fossils can survive in rocks for billions of years, allowing organic geochemists to use their appearance in Earth history to reconstruct the evolution of bacteria, plants, and, yes, animals.

After searching many ancient rocks, organic geochemists discovered two molecular fossils that they concluded were evidence for the earliest animals on Earth, known as 24-isopropylcholestane (24-ipc) and 24-n-propylcholestane (24-npc). Both have been found in rocks 100 million years older than the Cambrian explosion, pushing the origin of animals back well before their earliest macroscopic fossils. Scientists believed that these molecules were exclusively produced by demosponges. This was an exciting discovery because demosponges are thought to be one of the first animals to have evolved on Earth. After this discovery, the main argument amongst organic geochemists was whether other forms of life, like plants or bacteria, could also make 24-ipc and 24-npc, in which case they would no longer be considered the earliest evidence of animal life.

Bobrovskiy et al. would say that these molecular fossils are not diagnostic of demosponges. In their experiments, they put green algae under artificial conditions meant to mimic fossilization, a process known as pyrolysis. When they analyzed the molecular fossils that pyrolysis produced, they found 24-ipc and 24-npc. This was a surprise, because algae cannot synthesize cholestane molecules themselves, but they do make similar sterol molecules called isofucosterol and saringosterol. Usually these compounds retain their carbon skeletons as they are embedded into rocks. However, these authors found that occasionally the double bond on the tail of the sterols can react and add a new carbon atom to the molecule, forming the Y-shaped isopropyl group or an S-shaped n-propyl group (Figure 1). These modified molecules have identical structures to 24-ipc and 24-npc. By varying the amount of isofucosterol and saringosterol in their experiments, they could reproduce the changing ratio of 24-ipc to 24-npc found throughout the rock record (Figure 2). Bobrovskiy et al. used this evidence to conclude that these molecular fossils are a signature of algae, not demosponges.

Algae had already evolved and were probably widespread across the Earth before the Cambrian Explosion, so it seems more likely that 24-ipc and 24-npc are recording algal growth than animal evolution. Unfortunately, this means our earliest direct evidence of animal life is once again macroscopic fossils found near the Cambrian Explosion. Yet we know this is far too late for the first animals to have evolved. This leaves us with the open question: When did the last common ancestor of all animals that walk, swim, and fly on Earth today come into existence? Molecular fossils may still be our best hope of answering that important question.