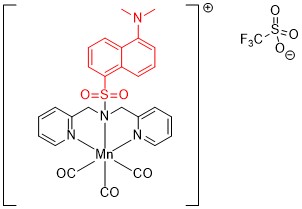 Title: Sense and Release: A Thiol-Responsive Flavonol-Based Photonically Driven Carbon Monoxide-Releasing Molecule That Operates via a Multiple-Input AND Logic Gate

Carbon monoxide is probably one of the last things you would expect to see touted as a new therapeutic. A highly toxic gas, CO binds strongly to heme groups, inhibiting the function of vital proteins such as haemoglobin, not to mention your respiratory electron transport chain enzymes. Hundreds of people die every year when the colorless, odourless gas is produced by incomplete combustion of fuels. You (should) have a CO alarm in your home. How can this compound be used as a therapeutic?

What fewer people are aware of is that all mammals actually produce CO. In fact you are producing CO right now at a rate of a few micromoles per hour, more if you are ill. This comes from the degradation (or catabolism) of heme groups. Heme oxygenases cleave open the porphyrin ring of heme groups and one of the products is CO (Figure 1). It has been shown (by stopping the expression of heme oxygenases) that the activity of heme oxygenase enzymes is important in helping cells and tissues recover from diseased or stressed states. But if you add CO in very small doses you get the same effect. Now CO is recognised as having vasodilatory, antibiotic and anti-inflammatory effects, amongst many other desirable properties. But just how do you administer a medicinal dose of CO?

That is the problem addressed by this paper. Although you can just breathe in CO gas, this is somewhat unselective and difficult to control. Chemists are tackling this problem by making so-called Carbon Monoxide Releasing Molecules (CORMs). These are compounds designed to release CO in a more controlled way. Many CORMs are metal carbonyl complexes, but others are organic molecules. Ultimately the goal is to make CORMs highly selective about when they release CO, so the extra CO is only provided where it is required. This reduces the undesirable and rather toxic side-effects of CO.

In the paper, the authors synthesized a novel manganese carbonyl complex (Figure 2) with some interesting properties. Just dissolve the complex in water and nothing happens. But irradiation with 405 nm light leads to CO release from the complex. This is a useful bit of selectivity; the CO is released wherever you choose to shine the light. The CO release itself was monitored in a clever experiment with the heme protein myoglobin. When CO released from the CORM binds to myoglobin, the UV-visible bands from the heme change, allowing CO release to be quantified.

Figure 2: The CORM featured in this paper.

On its own light-triggered CO release is not so remarkable – many metal carbonyls dissociate a CO ligand when irradiated. But here the authors have combined light-triggered release with reactivity towards hydrogen peroxide, H2O2. The very same CORM also reacts with H2O­2 to release CO as measured with a CO sensor (myoglobin could not be used here as it would have been damaged oxidatively by H2O2). This is also a useful stimulus because diseased or stressed cells of contain an excess of so-called ‘reactive oxygen species’ including H2O2 – another good way of focusing CO release where it is needed.

In fact CO is not the only toxic gas being explored as a therapeutic; H2S and NO are also being developed as therapeutics with comparable challenges. Improving the delivery and selectivity of these compounds is an interesting problem spanning many different specialist areas and could lead to some quite surprising medicines in the future.

A final note: the paper is a communication and as such the whole thing is less than four pages. This means that it sticks to the key points but there is not much room for detailed explanations. As with any paper, if you are interested it is always worth browsing the Supporting Information file for extra data and details, sometimes even a little extra discussion.