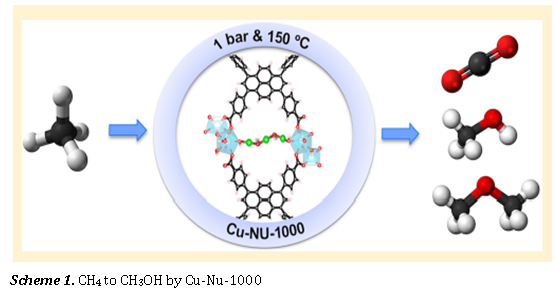 The United States has 110 years of reserve for natural gases trapped in the shale formations, commonly referred as Shale-gas (According to the EIA Annual Energy Outlook 2011). Contrary to the dependence on other countries for crude oil, the US independently produces the majority of the natural gas that is consumed. However, it is crucial to convert the natural gas to portable liquid hydrocarbon to mitigate the transportation cost and associated environmental damage. And to this front an array of molecular (or “homogeneous”) and MOF (or “heterogeneous”) catalysts are offering a variety of ways out.  While the molecular catalysts often benefit from better selectivity and efficiency they are limited by their stability, which can be enabled by using robust heterogeneous catalysts.

Copper in its metallic or oxide/hydroxide forms has been found to be inexplicably successful in catalyzing methanol formation recently.  Notably a number of hybrid Cu catalysts have been employed in reducing Carbon dioxide (CO2) to Methanol.

In this particular work NU-1000, a Metal Organic Framework first developed at Northwestern University (NU) is employed as a support for Cu-Oxo clusters. MOFs are sponge like porous MOFs where inorganic metal oxides/hydroxides (nodes) are tethered together by organic carboxylates (di/tri-substituted). The MOFs have found a widespread application in catalysis, ion-sensing, drug delivery and gas storage etc. In NU‑1000, Zirconium (Zr)-oxo/hydroxo clusters are connected via substituted pyrenes providing reactive sites for the atomic layer deposition of Cu ions. While zeolites were previously used for methane (CH4) oxidation to methanol (CH3OH) at 150-200°C, the strong adsorption of the product on the hydrophilic zeolite limited its applicability. Prevalence of the hydrophobic aromatic groups in the MOF makes it an apt alternative for zeolites. Not only the reactivity of the hybrid system but its characterization and mechanism have also been studied thoroughly in this collaborative work among six research groups in the US, Germany and Saudi Arabia.

This work depicts the efficiency of Cu-NU-1000 MOF in the controlled oxidation of CH4 to CH3OH along with dimethyl ether and CO2 as minor products (Scheme 1). The MOF is first activated at 200°C in the presence of O2 and then loaded with methane at 150°C. Afterwards a mixture of 10% steam and 90% Helium is introduced to aid in desorbing the products. Any higher portion of steam resulted in decarboxylation of the organic linkers present in the MOF. To explain the origin of Cu selectivity in this MOF it is instrumental to characterize the MOF first.

Powder X-ray diffraction spectroscopy shows that the MOF retains its crystallinity in most parts after Cu deposition. The MOF only loses its peak intensity at a particular diffraction angle where the inclusion of Cu-oxo clusters inside its pores takes place. The decrease in pore volume and surface area also supports this finding. X-ray Absorption Near-Edge Structure (XANES) of Cu illustrates its oxidation state and coordination environment. To decipher the oxidation state of Cu present in this MOF, its spectrum has been compared with that of some reference compounds of Cu; among those Cu-NU-1000 resembles the spectral pattern of Cu(OH)2 the most suggesting Cu2+ is predominantly (85%) present in this MOF. The Extended X-ray Absorption Fine Structure (EXAFS) of Cu also indicates that Cu is square planar coordinated to 4 Oxygen atoms. After understanding the structure around Cu, computational modeling is performed to realize the chemical connection between the Cu and Zr. In Fig. 1 we can see that a trimeric Cu-hydroxide cluster is bridging the two nodes across the pore of the MOF.

Now looking back at the Cu selectivity in this MOF it has been concluded that among the Cu2+ and Cu+ species, only the former is catalytically active since EXAFS does not provide any evidence for the presence of Cu0. Moreover only 9% of the total Cu2+ contributes towards 45-60% of the overall selectivity of methanol and dimethyl ether production.

In summary this work combines the best of both metal oxide catalysts and MOFs. It explains the design principle of a novel methane oxidation catalyst by putting together Cu and NU-1000, a MOF with heightened structural stability. The results depict a very thorough understanding of how the catalysis is taking place and unequivocally characterizes the catalytically active Cu species.