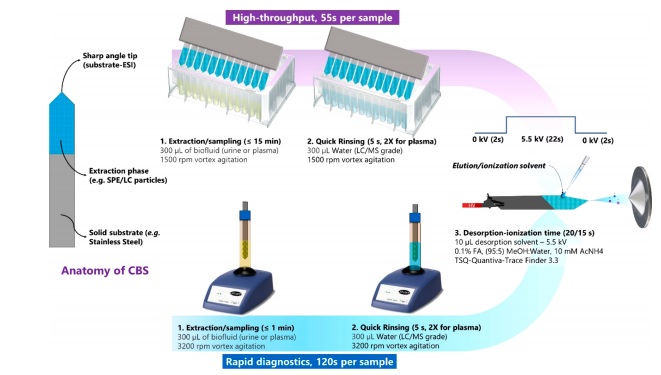 Every time a new sports season rolls around or the Olympics are about to begin, we hear about athletes being tested for performance enhancing drugs and doping agents. But how do scientists actually test for these drugs and how can they be so sure that they exist at a particular level?

Chemists often use a chromatographic separation coupled with a mass spectrometric detector to determine the level of a particular drug in a human biofluid, typically plasma or urine, based on its exact molecular weight and chemical structure. This same technology can also be applied to screen foods for pesticides or water for contaminants. However, these processes are not as easy as they sound when you read about them in the news. They are often laborious, time-consuming, expensive, and can lead to false positives and inaccurate measurements. But what if there was a way to screen almost 100 samples from different individuals in a matter of minutes, with minimal labor or risk of inaccuracy?

The authors of this article use high-throughput coated blade spray mass spectrometry (HT-CBS-MS) to quantify model compounds representative of drugs or steroids often found in biofluids (Figure 1). Automated CBS extractions were done with a sampling robot from a 96 well sampling plate, enabling the preparation of almost 100 biofluids simultaneously. The blades were then positioned in front of a mass spectrometer, where the compounds of interest are desorbed from the blade, ionized, detected, and quantified. This process takes approximately 20 seconds per sample, therefore this high throughput detection method takes 20 minutes or less to analyze the full 96 samples.

The researchers set out to prove that HT-CBS-MS can accurately detect compounds in biofluids to the standards required by the World Antidoping Agency and clinical laboratories. The researchers chose 18 distinct compounds of varying concentrations, representing a range of typical anabolics, stimulants, and narcotics found in plasma or urine, to assess the accuracy and detection limits of their setup. All of the compounds quantified in this study demonstrated excellent linearity, precision, and accuracy between 0.1-10 ng/mL for plasma and 0.25-10 ng/mL for urine (Figure 2). The results from HT-CBS-MS show immense promise not only for antidoping agencies, but also for determining trace metal levels in water or narcotic concentrations in a criminal’s blood. A robust, easy to operate, and high throughput method for drug detection would vastly improve efficient screening and quantitative analysis.

The authors do caution that no technique is perfect, and even HT-CBS-MS suffers from limitations in identifications between a compound of interest and a potential isomer, as well as differences in levels of quantification between a compound in plasma and the same compound in urine. The researchers are still optimizing the system’s throughput, increasing signal-to-noise ratios that can hinder quantification at lower detection levels, and incorporating different mass spectrometric approaches that could lead to the identifications of even more compounds in a single sample. While there is more work to be done before this technique is a standard operating procedure in clinical laboratories, the research portrayed in this article represents a dramatic step forward in the world of analytical drug detection.