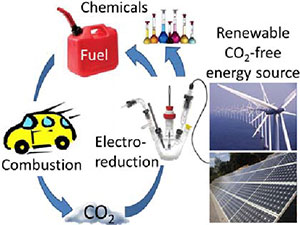 Title: Direct Observation on Reaction Intermediates and the Role of Bicarbonate Anions in CO2 Electrochemical Reduction Reaction on Cu Surfaces

Chemists can use catalysts to cause a reaction of occur that would not happen naturally. This method is used to produce many of the products we use in our households such as medicines, plastics, and cleaning supplies. The catalyst discussed in this paper is copper, and is being researched for its use to convert carbon dioxide (CO2) into usable products such as fuels. These researchers discovered new insights into the pathway of the catalysis reaction, including which molecules are the first to react, and what molecules are made during the process of the reaction. The ability to create fuels from CO2 could help offset the large amount of carbon dioxide in our atmosphere, and help us reduce our reliance on fossil fuels.

To create their catalyst, the researchers formed a thin layer of gold, to serve as the base layer. They then added a layer of copper on top, to serve as the surface site for the reaction to occur. The CO2 is dissolved in a mixture of KHCO3 and water, and the copper is submerged in the solution. The reaction the researchers are causing in this situation is converting CO2 to CO, through a process called reduction, where the molecule of CO2 gains an electron. CO can then be more easily converted through other known processes to fuels. The researchers cause this reaction to happen by applying an electrical voltage to the system they have created.

While the reaction is occurring, the researchers use a technique called attenuated total reflection surface enhanced infrared absorption spectroscopy (ATR SEIRAS). This technique allows them to observe the steps of the reaction as it occurs. This technique works by using infrared (IR) light, which is light with wavelengths longer than the human eye can detect. Infrared light causes molecules to vibrate, and each molecule vibrates at a slightly different wavelength of IR light, allowing researchers to determine what is present based on which wavelength is absorbed. In addition, this technique has been modified in a way that it can be used to measure molecules on the surface of a solid. This is useful here because the researchers can observe which molecules are reacting on the copper catalyst.

In this study, using the particular absorption fingerprints of the different molecules, they discovered that molecules created during the process of conversion from CO2 to CO are likely COH, COOH, and COO–. Understanding this pathway helps future researchers better understand what other catalysts could potentially serve a similar function, how to optimize the current process, and understand the details of the chemistry that is occurring.

Another method the researchers used in this study was isotopic labeling of the CO2 molecules. Isotopic labeling allows scientists to tag a certain molecule, by using a heavier carbon atom. Here, the most common mass of carbon is 12, but researchers can tag a molecule of KHCO3 with a carbon of mass 13. This allowed them to track which molecules of CO2 were reacting. They discovered that the CO2 reacting was that coming from the KHCO3 in solution. The CO2 dissolved was then replenishing the CO2 derived from the KHCO3. This means the system is much more complicated than originally thought. It also allows for a picture of the reaction like figure 1, where the KHCO3 acts as a shuttle to the surface of the catalyst for the CO2 molecules.

This research has exciting results for the possibility of creating usable fuels from CO2 with a copper catalyst. They found new information about the molecules formed throughout the process of the reaction, and that the other species in the reaction play an important role in moving the CO2 to the surface of the catalyst. Creating usable products out of CO2 would provide an economic incentive for us to capture it from our atmosphere, where it is otherwise a greenhouse gas contributing to climate change.