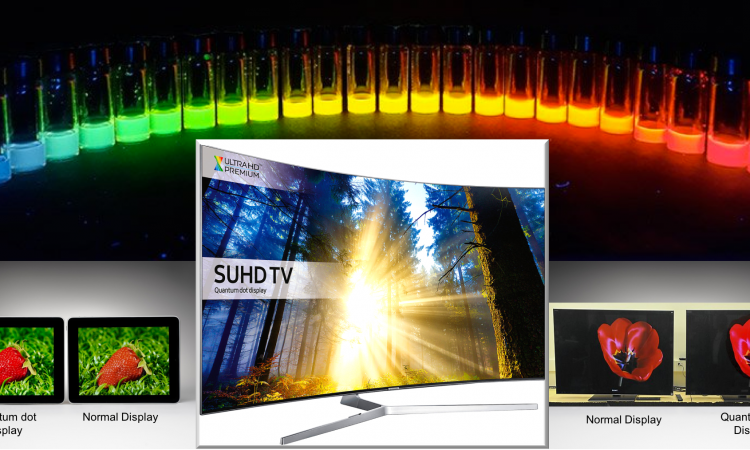 It is the holiday season! I am sure you have spent one of the days in the past few weeks enjoying a Netflix binge. According to the New York Daily News, an average adult spends ~33 hours per week watching television. Whether this number matches your lifestyle is a topic of discussion for another day but today let’s just go ahead with the fact that we all watch TV. And today, let’s skip looking at the TV and instead let’s look inside the TV.

Television has been entertaining us since the 1920s, beginning in black and white and then moving to color in the 1960s. Until the 2000s, TVs were bulky and heavy. A series of technological advances led to the current version of flat-screen energy efficient TV. Figure 1 shows the evolution of household television, displaying several versions of TVs through the years.

In this article, we look inside one of the most recent versions of TV and computer screens: Quantum dot (QD) TV, brought into the market by Sony in 2013 and also Philips in 2015. These screens have high definition resolution with a far wider range of colors and potentially lower costs in comparison to others screens on the market.

As discussed in a previous article, the novel properties of nanomaterials are manifestations of two main effects- increased surface area and quantum size effect. QDs exhibit unique properties due to pronounced quantum size effect which essentially means that charge carriers are physically confined due to the small size of QD. This confinement effect leads to discrete energy levels as shown in Figure 2.

The best way to visualize a quantum dot is by imagining a ball in a box. The motion of the ball is determined by the dimensions of the box. Thus, by varying the size of QDs one can vary its optical and electronic properties. Semiconductor QDs have a band gap which is the energy gap that electrons from highest occupied energy level have to overcome to reach the lowest unoccupied level. This band gap and arrangements of discrete energy levels in a QD changes with size as shown in Figure. 2.

On stimulation by electricity or light, electrons gain energy and are excited to a higher energy level creating a vacancy called hole in the lower level. However, according to the basic principle of thermodynamics, the lowest energy state is the most stable state and therefore the electrons return to their ground state recombining with the hole created on excitation. This recombination leads to the release of energy in the form of light whose color depends on the size, composition and shape of the QD. The process of absorption and emission of light from a quantum dot is shown in Figure 3.

The most significant part of a QD emission is that it can be tuned by changing the size of the QD. Figure 4. shows solutions of cadmium selenide (CdSe) QDs, a semiconductor nanocrystal. Each flask has different size of CdSe QD ranging from 1.7nm to 5nm, all illuminated by the same 365nm lamp, but all emitting different colors due to the aforementioned size variation. This wide range of emission from a single material of different sizes first led to the idea of using QDs in emitting devices.

However, an efficient application of any material in the color base of a TV requires color purity and efficient luminance. Color purity is an essential component of TV display because who would want a blue sky to look green and perfectly white snow-capped mountains to look yellow? At the same time, you wouldn’t want to miss the watch on the floor of the crime scene in your favorite thriller show just because it wasn’t bright enough on your screen. Therefore, the luminance of colors is also significant.

So, for best the TV display we would want bright colors with high purity. In QDs, since the size controls the color of light emitted getting monodisperse QDs is the key for color purity. Quantum dots are synthesized by a solution process in which QD seeds are formed from a mix of precursors. Controlling the nucleation and growth of seeds and using efficient size separation procedures have enabled collection of monodisperse quantum dots. Given their small size, QDs cannot be seen by naked eye or conventional optical microscope. A special microscope called Transmission Electron Microscope (TEM) which uses electrons to image objects is used to image QDs as shown in Figure 5a.

The next aspect for perfect display experience is luminance. This in QD terminology means that when electron is returning from higher energy state it should combine with the hole in the ground state. Presence of alternate pathways to this recombination can reduce emission. Most alternate pathways in QDs come from the surface states. Surface of any material is different from its bulk as there are no neighboring atoms on one side of the surface atoms. This results in unsatisfied bonds which form electronic states between the band gap giving alternate paths for electrons. Surface functionalization of QDs using organic molecules or capping of surface using an inorganic shell (see Figure 6) has decreased alternate pathways to recombination and increased QD efficiency.

In summary, the ultra-high definition television on the market and possibly in your living room is a successful application of quantum dots. Discovered 36 years ago and driven by curiosity and quantum mechanics, QDs have become the leading color panel technology due to their high tunability and efficiently narrow emission. Having succeeded to a great extent in optimization the synthesis and production strategies required to reduce the cost of QD display, the major challenge for QD industry remains in development of non-toxic QDs. Attempts are underway in research labs to make efficient QDs using non-toxic materials like zinc sulphide and copper indium selenide. So let’s hope our next, “Netflix and chill” holiday session is with a greener and better TV!