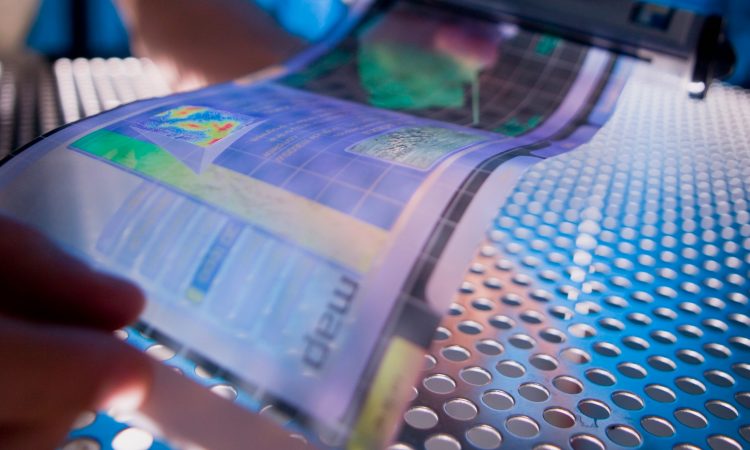 Featured image: “Flexible display” by U.S. Army RDECOM is licensed under CC BY 2.0

Of all the amazing developments in technology over the past 50 years, the one that sometimes feels the most like pure science fiction is the rise of touch screens. Interacting with a digital image using just touch can still feel like Star Trek. But have you ever wondered how a glass screen can know where you touched it? Typically, they measure the electrical current running through the surface, which changes when your finger touches it. But glass doesn’t conduct electricity, so it can’t detect anything by itself. In most touch screens, the glass is coated in materials called transparent conductors, which are able to conduct electricity while still being see-through.

Currently, many devices use a thin film of indium tin oxide as a transparent conductor. But indium-based films are usually very brittle, so they can’t be used for many developing technologies, like flexible electronics. The authors of this paper start solving this by using a different transparent conductor: silver nanowires.

Silver nanowires are pretty much exactly what they sound like: small wires (25 micometers long and 0.075 micrometers wide) made of silver. When spread on a surface, the wires can touch each other and form a conductive network across the material. The layer is so thin that you can see right through it.

But the current way of making these networks has a problem. When the silver nanowires are grown, they are coated with the chemical polyvinyl-pyrrolidone (PVP) so the wires are formed long and thin. Unlike the silver nanowires, this coating isn’t conductive and is hard to remove. If wires with PVP are touching each other, they can’t conduct electricity between them (Figure 1-left). It’s like wrapping the plugs of a power cord in plastic wrap before plugging it into the wall; there won’t be any electricity flowing to the wire.

Now that the PVP is gone, the silver is covered with a layer of tiny hydrogen atoms. This means that the silver atoms in neighboring nanowires can interact more closely with each other and even weld together, forming a single piece of silver with no visible connection (Figure 1-middle). This is like taking two pieces of Play-Doh and pushing them together; they stick to each other and act just like one larger piece.

To make sure this worked, the researchers looked at the nanowires using scanning electron microscopy (SEM), which clearly showed that the NaBH4 removed the coating of PVP (Figure 2A-B). The NaBH4 also reduced the resistance of the film (which should be low if it is very conductive) the longer it was exposed to it. It also kept the film transparent no matter the length of treatment. (Figure 2C). But now that the network is fully conductive, there is still one major issue that needs to be solved. The PVP that was just taken off also served another purpose: to prevent the silver from degrading. Just like silver utensils, silver nanowires will tarnish over time. If the nanowires aren’t protected, water and naturally-occurring sulfur compounds in the air (like hydrogen sulfide, H2S) will react with their surface and make them less conductive.

This means that after the PVP is removed and the nanowires weld together, the researchers needed to put another coating on top of the entire network of nanowires. They chose the chemical dodecanethiol (DT), which is a twelve carbon-long hydrocarbon (a molecule made up of hydrogen and carbon) with a thiol (a sulfur and hydrogen atom bound together) at one end. Silver can form a very strong bond with sulfur atoms, so when this is added to the nanowire network, the nanowires become coated in these long molecules (Figure 1-right).

Hydrocarbons are very hydrophobic, meaning that they repel water, so the new coating of DT prevents the water in the air from reacting with the silver nanowires. Also, because there are so many DT molecules on the surface of the nanowires, the sulfur-based gasses in the air can’t reach the surface either, protecting the nanowires even more.

After they developed this three-step treatment, the researchers had to test the new coating and make sure that it could be used in future applications. To do this, they looked at the film’s performance while bending it, creating a current-voltage curve (I-V curve). This measures the current through a material while applying a specific voltage. A material with low resistance (and high conductivity) should have an I-V curve that looks like a straight line and a steep slope. When the film was bent, the I-V curve looked nearly identical to when it was flat, meaning that it was still conductive when bent (Figure 3A). Bending the film over and over also didn’t have much of an effect on its conductivity, meaning that it could stand up to long-term use (Figure 3B).

With this paper, these researchers have shown that networks of silver nanowires could be used in durable, flexible electronic devices in the near future. The next step is to start finding ways to incorporate these films into new and exciting devices. Want to control your phone with touch screens on your clothes? Use a tablet you can roll up and fit in your pocket? These devices may be coming to you sooner than you think.