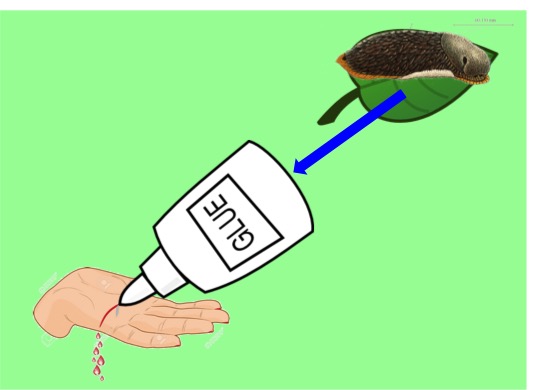 Imagine yourself relaxing in a garden, with your eyes closed and ears opened to songs of nature. A refreshing flowery scent appears to come closer and closer to your nose. It would be romantic if your partner surprised you with a bunch of beautiful roses. You cannot wait to open your eyes, only to see your playful roommate holding a flower stem with a slug to your nose. “Urgh!” you turn your face away immediately.

Perhaps many of us have the same “Urgh” when we see a slug. It’s ugly, wet, and unpleasantly slippery. Yet it is the inspiration of new chemistry innovation! The mucus of slugs has inspired scientists to invent a new “superglue” which can stick our body organs back together in medical operations.

Looking for glue, where’s the clue?

We might think there are already plenty choices of glue to put broken pieces back together. In medical applications, however, it has remained a challenge for scientists to discover ways to stick organs and cell tissues back together in therapies as our organs are wet and movable. To make matter worse, many of our existing glues are toxic to our body’s cells.

When slugs are frightened, they secrete mucus to stick themselves firmly to their place. This mucus can help slugs hold onto wet slippery surfaces, therefore preventing them from being taken away by predators. Inspired by this intriguing feature of the mucus, scientists have unveiled three criteria for their biological-friendly glue invention. First, it must be stretchable and tough, just like rubber bands, for it to be applied on movable surfaces. Second, it has to contain molecules that can easily form bonds with the target surface so as to perform the sticking work. Third, this glue has to be compatible with body fluids for medical use.

In this work, the biological-friendly glue proposed consisted of two layers: the first layer contained positively charged polymers to play the sticking role and the second layer was a tough yet stretchable layer. To find suitable candidates as the glue, scientists have chosen polymers with primary amine groups (−NH2), which can be absorbed to the body tissues through electrostatic attractions, and bind covalently with the tissue surface. As for the second layer, they have picked hydrogels, which can be thought of as a net of cross-linked polymers composed mainly of water (Figure 1).

For the glue to perform its best, the target surface has to be wet with negatively charged molecules. The positively charged polymers in the glue can then bond to this surface through electrostatic interactions, as well as covalent bonds across the surface in contact, whereas the second layer capable of stretching and preventing cracks or fractures.

Figure 1 shows the design of the innovative glue. The green circles represent amine groups, while the red circles symbolise calcium ions that hold the positive polymers. When the glue was applied to the tissue surface, energy is released due to the bond-breaking reaction between alginate chains and calcium ions. This in turn pulls the surfaces together.

Scientists have evaluated the sticking performance of the glues by measuring the energy released when they stick (adhesion energy). The more energy that is released when they stick, the stronger the glue can adhere to the target. Their glue was demonstrated to have large adhesion energy. They have also discovered that this energy depended on the concentration of primary amines instead of molecular weight of polymers.

By optimising the toughness and sticking ability, the researchers found that the polymer, alginate-polyacrylamide (Alg-PAAm), exhibited high adhesion energy and toughness suitable for making the glue.

In evaluating the performance of their glue, researchers proved this glue to be usable in a beating heart, and was still working 2 weeks after it was implanted in a rat! In addition, this new glue has been shown to be less likely to cause inflammation.

Give thanks to slugs

The non-toxic and intriguing chemical and physical properties of this glue makes it an ideal tool in the future of life-saving medical operations. While you may still find slugs disgusting and “urgh,” perhaps you can start to appreciate them for their amazing inspiration to scientists!