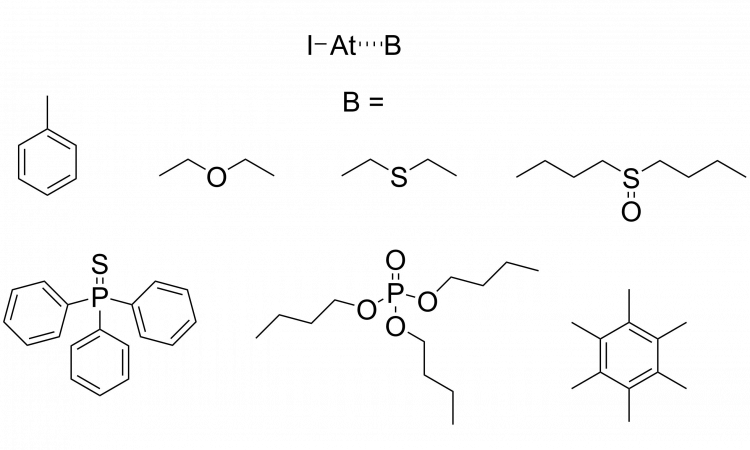 There are not that many papers about the chemistry of astatine (At). In the periodic table, it lies within the halogens, below iodine, suggesting that it would have similar properties to other elements in that group. However, for a naturally-occurring element it is very rare, and all its isotopes are radioactive with half-lives of hours or less. In fact, only around a gram of naturally-occurring astatine exists at any one time, so it has to be synthesised by smashing smaller nuclei together. As a result, even many of the basic physical and chemical properties of astatine remain a mystery to chemists. Today’s paper goes some way towards improving our understanding, presenting evidence that an astatine compound can form halogen bonds like the other halogens.

Halogen bonds are a type of molecular interaction similar to a hydrogen bond (Scheme 1). Just like the hydrogen (H) atom in O-H or N-H is attracted to an electron donor to make hydrogen bonds, the halogen (X) is electron-deficient in a halogen bond R-X, where X = Cl, Br, I (and sometimes F to a lesser extent) and R is often another halogen or carbon.

Scheme 1: Hydrogen and halogen bonds, where B is an electron pair donor. Confusingly, despite donating a pair of electrons, B is also called a “hydrogen/halogen bond acceptor”.

The reason why the R-X bond behaves as an electrophile is due to the formation of a “s-hole”. The lone pairs of the X atom form a belt of negative charge around the of the atom, leaving a more electron-deficient region sticking out along the R-X bond, the s-hole.

With this in mind, the authors performed computational studies on the diatomic molecule AtI to look for a s-hole that might lead to halogen bonding. Encouragingly, they found astatine bears the hole, suggesting astatine could be a halogen bond donor. Additional calculations with some halogen bond acceptors (Scheme 2) reinforced this – the astatine halogen bonds were more stable than the iodine ones by 10 kJ/mol – a big enough difference that potential acceptors would be very selective for the At. Scheme 2: The halogen bond acceptor species tested in this work. These compounds can donate pairs of electrons to the electron-deficient astatine. This could involve donation of oxygen or sulfur lone pairs, or even electrons from π-bonds.

These results were backed up by experimental evidence. This involved the immiscible mixtures of cyclohexane and water. The AtI is synthesised by oxidation of At in the presence of sodium iodide in the aqueous phase. That AtI product can then cross into the cyclohexane phase. Here, a potential halogen bond-accepting suitor awaits an arriving AtI molecule and binds it. This in turn pulls more AtI into the cyclohexane phase as the equilibrium shifts. The experiments showed that adding halogen bond donors changes the astatine distribution, confirming that AtI is interacting with the donors. The trends in their results agreed well with computational predictions of the halogen bonding strengths.

You may be wondering whether this work will find any applications. If you are wondering that, remember that the fundamental insight has value all on its own – you never know what we might want to use astatine and its molecular interactions for in the future! Just to know the astatine forms halogen bonds in the same way the other elements do is very valuable knowledge for future chemists to exploit. To this end, the France-based researchers suggest future work should involve trying to expand the list of known astatine bond donors beyond the current total of…one, just AtI. There is also the question of whether you can get two halogen bonds from AtI – one donated by each atom.

In addition to this fundamental contribution, the authors enthuse about how their work could be applied in nuclear medicine; if chemists can get control over the halogen bonding of astatine, it may lead to improved delivery of At radionuclides for cancer therapy. Future studies, suggest the authors, could focus on how to use halogen bonds to link the At-211 isotope to tumour-targeting agents more effectively.

Plenty of secrets remain in astatine chemistry, but this work could lead the way towards uncovering the properties of this elusive element.