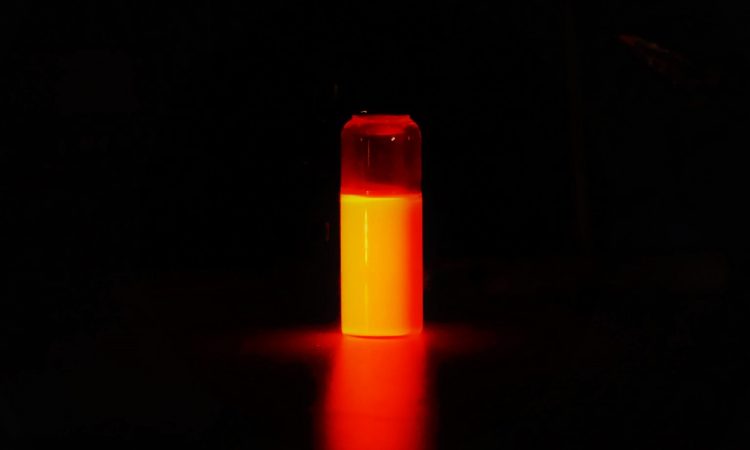 Quantum Dot Chemistry: “Plenty of Room at the Bottom”

Renowned physicist Richard Feynman gave a lecture in 1959 titled “There’s Plenty of Room at the Bottom”1 about the exciting premise of being able to manipulate individual atoms through advanced synthetic chemistry. This idea of direct synthetic control has taken shape as an area of research called nanotechnology, which has enabled technologies such as extremely small scale processors found in phones. One particularly exciting class of nanomaterials is the bright and colorful quantum dot.

Quantum dots are small semiconductor materials that have unique interactions with light due to their size and have radii of ranging from 1 to 10 nm (as a comparison, the radius of a sodium atom is 0.18 nm). A traditional large-scale semiconductor absorbs light that is equal to or higher in energy than the band gap, which is the energy difference between electron orbitals in the material. Silicon is one example of a large-scale semiconductor that absorbs light at and below its band gap of 1100 nm ( 1.1 eV).

In contrast, individual atoms and molecules have strictly defined absorbance wavelengths. For example, helium absorbs 12 specific wavelengths of light (338 nm, 447 nm etc.) and nothing else. This specific absorbance pattern is known as quantized or discrete absorbance.

A quantum dot, which is made up of hundreds of atoms, displays characteristics “in between” that of a bulk semiconductor and an atom. It has features of the band gap like a semiconductor, but also shares the atomic property of quantized absorbance; hence, the name quantum dot. The size of a quantum dot dictates its absorbance wavelength, and also the color of its luminescence light. As quantum dots get smaller, their color is blue-shifted, meaning they stop absorbing lower energy (red) light. This tunable absorption of quantum dots also corresponds with tunable emission, which is the ability to change the color of light that quantum dots emit.2 Quantum dots in solution showing their tunable colors based on size. The more red in color, the larger the dots.(Samsung)

How to make a tiny dot

Methods to produce quantum dots in a controlled fashion were first developed in the early 1990s.3 Researchers found ways of growing tiny, evenly distributed clusters of one hundred to many thousands of atoms.

The most prominent way for scientists to construct quantum dots is through colloidal chemistries. Typically, a crystal is grown from a saturated solution of precursors (think of salt crystals growing out of water). This solution produces bulk materials with sizes on the order of millimmeters to centimeters. Researchers used this understanding of crystal growth and found modifications to control the size of the growing crystals. This was realized through the use of ligands, which are agents that bind specifically to certain atoms. Ligands added to solution growth conditions selectively bind the atoms at the surface of the growing crystal and inhibit their growth. Chemists can quench the reaction to easily produce small-scale, crystalline semiconductors: quantum dots.

Diagram of a surface ligand capped quantum dot. The long chains on the surface are the ligands that inhibit growth and is the crystalline arrangement of atoms. (ORNL)

What’s it being used for?

The biggest success is the use of quantum dots by Samsung in their state of the art QLED TV. It’s a highly pure-color TV available right now. The display is absolutely incredible and based on using different size (and therefore color) quantum dots. The quantum dots are superior to previous technologies because their colors are much more discrete, e.g. the colors are individual pixels are a single color with no mixing.