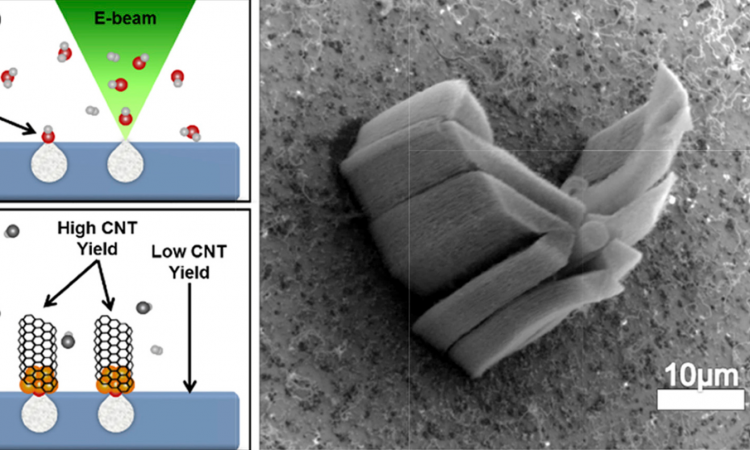 Creating organized shapes and patterns from carbon nanotubes (CNTs) is not a new concept but an on-going challenge of the last two decades. This work is significant, however, because previous methods required physical masks, resists, or stencils, which complicate the process and limit the resolution of shapes and patterns because these methods typically involve light activation. With an electron beam, the limitations are less, and scientists can make far more elaborate patterns because the wavelength of an electron is considerably smaller than that of a photon (light). But why is it so essential that the CNTs are patterned?

It is extremely important at any scale how materials are organized. Imagine a building that was built by just throwing materials at random until something tall was built. The building would be essentially useless, and you wouldn’t even want to think about how unstable it would be; it would have no real purpose. The same can be said about nanomaterials, where such ineffective structures are known as “unorganized architectures.” If the carbon nanotubes are randomly oriented, their strength, conductivity, and many other properties become far worse because just like with buildings, organization leads to improved properties. By printing them in exact shapes, patterns, and sizes, the nanotubes can be optimized for exact applications such as microelectronics and synthetic muscles, just like how some buildings are shopping malls and others are aircraft hangars.

To create these ordered structures, the researchers exposed a sapphire surface to an electron beam with water vapor in the chamber (Figure 1a). A catalyst precursor that assists in forming the nanotubes was then introduced onto the surface (Figure 1b), which enabled growth of tall, vertically-aligned nanotubes. Even when the entire support structure was exposed to the CNT catalyst and precursor, only the irradiated regions showed signs of nanotube growth (Figure 1c).

Just like how paper printers evolved from the printing press to laser printers today, nanopatterning is beginning to make the same transition where materials like carbon nanotubes can be printed accurately and quickly into elaborate, organized patterns. These unique shapes can then be used for exciting future applications including ultra-compact sensors, self-cleaning materials, and nanosprings.

Cover photo reproduced with the permission of Elsevier.