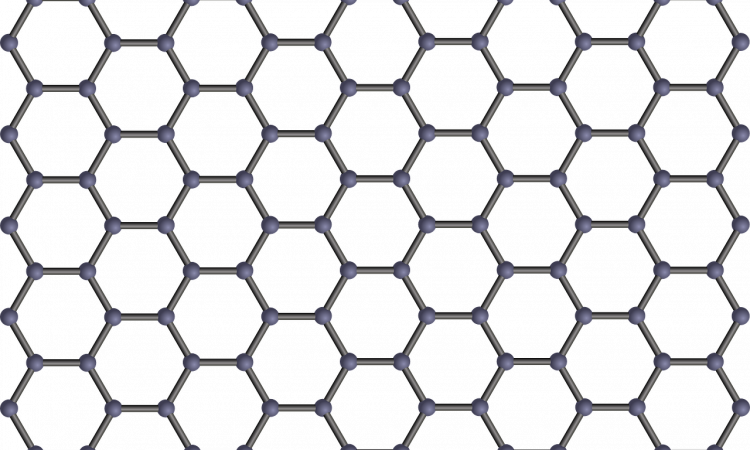 Title: “Silicon as a ubiquitous contaminant in graphene derivatives with significant impact on device performance”

When scientists first invented graphene, it was believed to be revolutionary. It is the thinnest, strongest, and most flexible material known to man. It conducts heat and electricity, and is almost transparent. While graphene possesses many amazing properties, it is simply made of carbon, the same stuff as in your lead pencil or a diamond. It is the arrangement of carbon atoms that made it special – Graphene consists of a single layer of carbon atoms in a hexagonal lattice, and it is technically a 2-dimensional material (Figure 1).

Graphene was first characterised in 2004 by Andre Geim and Konstantin Novoselov at the University of Manchester, and in 2010 the pair won the Nobel Prize in Chemistry for their discovery. At the time, everyone was excited for graphene. Due to its unique properties, we were promised technology like space elevators, solar cells, flexible electronics, superconductors and faster semiconductors. But it’s now nearly 15 years since the discovery of graphene, and it hasn’t exactly lived up to the hype. So, what happened to this exciting new tech? Well, one reason why graphene is not as widely used as it might be is because any new material needs to have demonstrated big advantages over current materials if it’s going to displace current technology. In the case of graphene, perhaps, it hasn’t been performing as well as it should be.

A recent paper by Jalili et al. has suggested its poor performance could be resulted from silicon contamination , and thereby investigated ways to purify the graphene material for better performance.

Because graphene is so thin, it is particularly susceptible to surface contamination, and any contamination may change its properties. The contaminants reduce the available surface area, which decreases the conductive performance of graphene and results in inconsistencies in manufactured graphene (Figure 2). Figure 2. Representation of the available surface area of graphene where a) shows pure graphene and b) shows a contaminated surface where orange rafts represent contaminants that interfere with the red molecules interacting with the surface. Jalili et al. 2018 CC-BY 4.0

The researchers used high-angle annular dark-field (HAADF) imaging combined with energy-dispersive X-ray spectroscopy (EDS) in a scanning transmission electron microscope (STEM) to visualise the surface of graphene and characterise the contaminants. HAADF is sensitive to variations in atomic numbers in a sample. Since silicon has a higher atomic number relative to carbon and oxygen, it will appear as bright spot on the microscope images (Figure 3). The researchers used the EDS data to confirm that most of the bright spots were due to silicon, and not some other heavier element. They found silicon contamination covers a large proportion of the surface area of graphene produced from low-purity graphite. The researchers tested graphene synthesised via a number of different methods but found the same problem of silicon contamination. Imaging of the parent graphite showed a significant amount of silicon present, meaning the contamination came from the graphite source and was not affected by the method used to produce the graphene. Since this contamination affects the performance of graphene, it is important to produce high-purity graphene. The researchers evaluated a number of methods to purify graphene. They tried to wash the graphene material with a base but it failed to remove the silicon and caused the graphene sheets to stack and stick together. They have even tried with fluoride-based reagents to remove silicon, but it was also unsuccessful and disrupted the structure of the graphene layers. The researchers therefore concluded that trying to purify graphene made from low-purity graphite was not viable. Furthermore, purification of graphene is hazardous and would significantly increase production costs.

A better alternative is to synthesise graphene from high-purity graphite. The researchers evaluated 3 different graphite feedstocks of varying purity (98%-99.9%) and used them to build graphene-based supercapacitators, a kind of super battery. The device made with high purity graphene showed a massive capacity to hold charge and was close to the theoretical capacitance limit of graphene sheets.  They also used the high-purity graphene to build a relative humidity sensor with the highest sensitivity and lowest limit of detection ever recorded.

This research demonstrates the critical importance of graphene purity and explains why graphene technology has been limited up to this point. Hopefully, by using high-purity graphite feedstocks, scientists and engineers will soon be able to unlock the exciting potential of graphene.