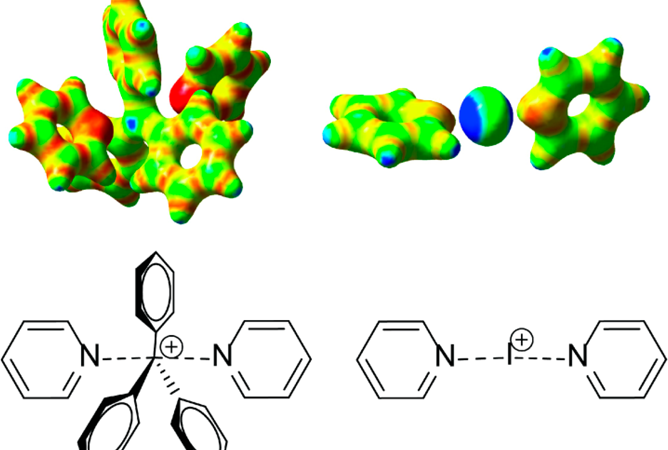 When we talk about chemical bonds, some of the ones that come to mind are covalent and ionic bonds. These are the most commonly encountered bonding types within molecules, however, there exist many other types of non-covalent bonding such as metal ligand co-ordination bonds or hydrogen bonding. In the recent years, there has been increased interest in probing other less defined bond structures in order to advance our understanding of them.

Non-covalent bonds have been sorted into 2 broad categories: σ-hole or E-bond interactions.  σ-holes are classified as a region of electrostatic potential and can be described as an extension of an existing covalent bond, which interacts with a negative site such as an electron pair or a Lewis base, forming the σ-hole bond. This is comparable to having a paper clip (negative site) in the vincinity of a magnet (σ-hole), where the paper clip being attracted to the magnet is similar to the formation of the bond. E-bond interactions are a non-covalent Lewis base-Metal bond, similar to that of hydrogen and halogen bonding.

This brings us to the bond discussed by this group, the tetrel bond, a non-covalent bond between a Group 14 element (such as Si and Ge) and an electron donor. The electron donor donates to the electron hole (also known as a p-hole) in the Group 14 element, forming the tetrel bond. Tetrel bonds are known to have bond strengths similar to that of hydrogen bonds, which are amongst the strongest known no-covalent bonds. Figure 1. Illustration of the periodic table with focus on Group 14 elements

In this paper, Karim and co-workers have developed a molecule that has the strongest known tetrel bond and have experimentally studied the structure using spectroscopy and crystallography. What is interesting is that the geometry of this complex mimics that of an SN2 transition state, which opens doors to studying the chemistry of reaction mechanisms and bonding. In order to determine the structure of the synthesized compound, the group employed 15N NMR in tandem with 13C NMR. The shifts in both spectra indicate the formation of a N—C—N bond, in complexes with specific R groups that give the appropriate electronic environment. Dynamic spectra was also studied, using low temperature NMR as a standard for solution state NMR, demonstrating that the static geometry at low temperatures is different than that of the dynamic geometry due to molecular movement at higher temperatures. The exact temperature dependence was not determined due to being unable to deconvolute the overlapping NMR shifts.

An interesting discovery is that the electron density of the ligand does have an effect on the bond strength due to the deshielding of the nitrogen and shielding of the carbon. This tetrel bond has potential applications as it can be used to conceal the lewis acidity of p-orbitals in compounds that would otherwise react strongly in a Diels-Alder reaction.

Overall, these [N—C—N] compounds are useful as they can provide a better model for the study of SN2 transition states than the current halogen models, which will allow us to further probe the mechanism and improve our understanding of the mechanism of bonding within such compounds. In turn, this will allow us to make improved hypotheses regarding the reaction outcomes, allowing fo increased efficiency in the synthesis of tailored compounds.