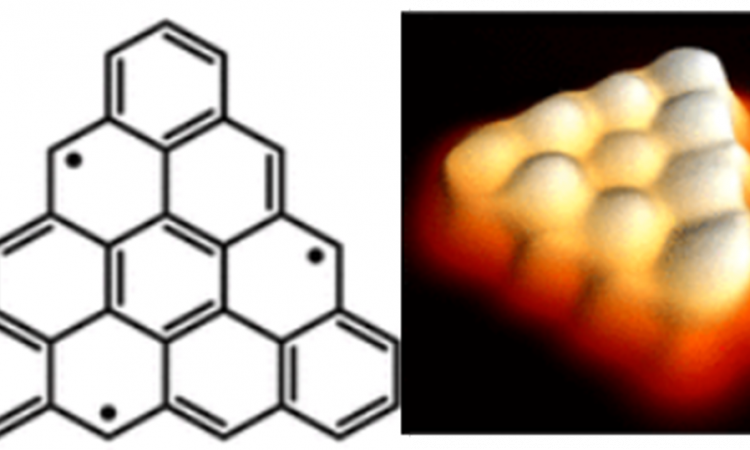 220 years ago, when Lavoisier identified carbon as one of the key elements present in the earth, he identified several analogs of carbon such as diamond and graphite. Since then, many new allotropes have been discovered, and graphene is one of the newest additions to the list.

Graphene, which is a single layer of the material present in the tip of the pencil, has unique electronic, mechanical and optical properties. Graphene can be used to make superconductors and its high tensile strength makes it mechanically robust.

It was discovered by Andre Geim and Konstantin Novoselov in 2004; since then, graphene research has increased exponentially due to its rich and diverse potential applications. While graphene is actually an extended 2D network of carbon, scientists started looking into small graphene analogs to examine how their properties change with their structure. In this respect, triangular shaped graphene analogs received significant interest because of their unique topology that forces the material to have at least one unpaired electron. The unpaired electrons make these graphene analogs highly magnetic materials (Figure 1). In this work, researchers successfully synthesized one of the analogs of these triangular shaped nanographenes (i.e. π-extended triangulene) and characterized its electronic properties both experimentally and computationally.

Conventional solution-based synthesis of these triangular shaped materials is often challenging due to high reactivity. Unpaired electrons present in these systems can react easily with air and water, making these extremely unstable. To overcome this, these types of molecules are generally synthesized on a gold or silver surface from a precursor molecule under ultra-high vacuum. Based on the precursor molecules, the structure of these graphene analogs changes as well as its properties. In this way, a systematic tuning of the properties could be obtained easily using this technique.

Herein the researchers used this method to obtain an unfunctionalized triangle-shaped graphene analog. Once the precursor (i.e. compound no. 2 in figure 2) was synthesized at solution phase, gold surface was covered with sub monolayer of the precursor at room temperature and annealing at higher temperature produced the final product (i.e. compound no. 1 in figure 2).

Scanning Tunneling Microscopy (STM) was used to confirm the formation of the molecule. It was observed that about 17% of the total gold surface was covered with well-defined triangular shapes of the molecule as expected. High resolution STM imaging revealed the chemical structure of the formed molecule and it indeed confirmed the formation of π-extended triangulene (Figure 3).

Graphene analogs generally have high conductivity which can be leveraged for many electrical applications. High conductivity in these systems generate from the free electrons and their mobile nature throughout the material. Hence, electronic structures were calculated computationally to understand the energy level of these electrons. One of the ways to calculate energy levels are to monitor the behavior of electrons under an imaginary force field. At zero field energy, it revealed presence of three non-bonding states in the electronic structure, due to the presence of three unpaired electrons. However, considering other approximations in the force field such as electronic interaction shifted the degeneracy and a columbic gap was noticed in the electronic spectra (Figure 4a). Calculation of the magnetic properties also corroborated the claim that there are free electrons present within the system.

The outcomes of the electronic structure calculations were replicated experimentally using Scanning Tunneling Spectroscopy (STS). Coulombic gap of 1.55 eV was observed that correlated to the computationally derived values. This ultimately confirmed the presence of the material with paramagnetic properties (Figure 4b).

The inherent magnetic properties of these types of materials can play a major role in developing spin-electronic devices in the future. Hence, scientists are investigating these unusual shaped molecules with interesting electronic properties. Herein, for the first-time researchers were able to synthesize a new extended triangular shaped small graphene analog that has very strong paramagnetic properties. These molecules can be used to make organic ferromagnetic materials which are useful for a diverse range of applications from electric motors, loudspeakers to the magnetic strip on credit cards. We can hope that gradual development in this field will eventually help us to realize the full potential of these materials.