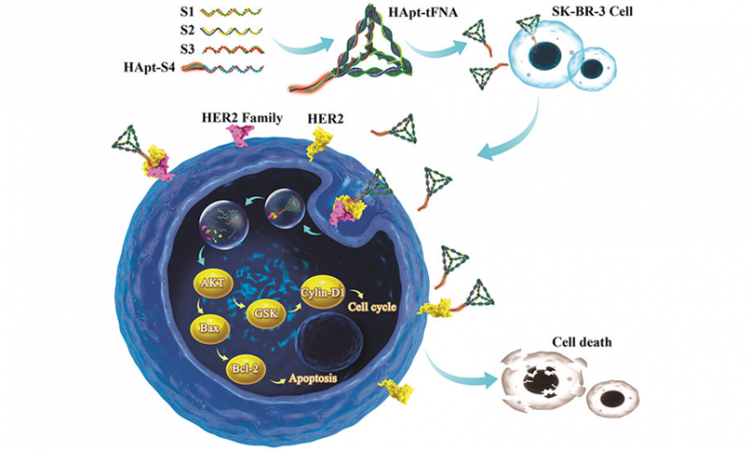 Cancer is a difficult disease to treat, especially because cancer cells are just mutated, out-of-control versions of a patient’s own cells. Therapies must specifically target tumors without causing too much damage to healthy tissue. In recent years, advances have been made with new technologies that recognize proteins or other biomolecules called biomarkers that are overexpressed in cancer cells, meaning that the cancer cells have more of that biomolecule than healthy cells do. One important biomarker in many breast cancers is HER2, a kind of epidermal growth factor receptor (EGFR). EGFRs are proteins embedded in the cell’s outer membrane; they translate signals from outside the cell into intracellular signaling pathways that determine whether a cell grows and divides into more cells or self-destructs to allow healthier cells to take its place. The overexpression of HER2, however, causes cancer cells to grow and divide out of control, and can even cause cancers to spread to other parts of the body. Current therapies against this biomarker use HER2-specific antibodies that cause HER2 to be digested within the cell (in organelles called lysosomes). However, these antibodies are expensive and difficult to make, and they have severe side effects including diarrhea, liver problems, and resistance against the antibodies. Researchers are now looking to nanotechnology to find a therapeutic replacement for these antibodies.

The current researchers sought to use nanoparticles made of DNA to cause HER2 degradation. They started with a HER2-targeting strand of DNA called “anti-HER2 aptamer” (HApt) that was developed previously. HApt is a short strand of DNA that has been shown to bind HER2, cause its degradation, stop cell growth, and initiate the cell’s self-destruct sequence. However, this lone strand of DNA isn’t very stable, and it’s cleared out by the body relatively quickly, leading to a short period of action for the drug and a relatively low therapeutic efficacy. To solve these problems, the current researchers combined HApt with a DNA nanoparticle called a tetrahedral framework nucleic acid (tFNA) to create HApt-tFNA (Fig. 1A). tFNA is a promising nanocarrier of antitumor drugs. HApt-tFNA is easy and inexpensive to produce (the strands of DNA even self-assemble into the finished product), and this DNA construct could be degraded in the lysosomes along with its target HER2. The researchers hypothesized that this combination nanoparticle would circulate longer in the body and have an increased cell-killing effect on tumors.

To determine whether HApt-tFNA would circulate in a mammalian body longer than HApt alone (“free HApt”), they first use fluorescence imaging to visualize the nanoparticles in mice (Fig. 1B). They found that their hypothesis was correct: HApt-tFNA had a longer half-life (35 minutes, the amount of time until half of the initial amount of drug was degraded by the body) than free HApt (15 minutes). In a different experiment, researchers saw that the probe could specifically enter the cells–and the lysosomes–of tumor cells overexpressing HER2 compared to non-HER2 cancer cells and healthy cells. But does this longer circulation time and HER2-specificity lead to more HER2 degradation and tumor cell death?

Luckily, fluorescence can also be used to determine what stage of the Cell Cycle a cell is in. The researchers could differentiate between three situations: (1) the G0 to G1 phases, where the cell is in normal growth or resting states, (2) the S phase where DNA is replicated to prepare for the cell to divide, or (3) the G2 to M phases where the cell prepares for and goes through mitosis and cell division [1]. However, if cells get stuck in the G2 to M phases, they are likely beginning their self-destruct sequence. So if a population of cells are growing less and self-destructing more, the researchers expect to see a decrease in the number of S phase cells and an increase in the number of G2 to M phase cells. And that is exactly what they saw after treatment with HApt-tFNA (Fig. 2A) compared to free HApt and especially compared to no treatment. After treatment, the researchers also isolated HER2 from the cells and determined how much was left over (i.e. not degraded). They found that HApt-tFNA-treated cells had less HER2 than free HApt or no treatment cells (Fig. 2B,C). In another experiment, the researchers saw that 48 hours after HApt-tFNA treatment, their cancer cells had only a 50% survival rate compared to non-treated cells. Thus, it seemed the scientists had improved upon earlier inventions to create a DNA nanoparticle that could circulate longer in the body and increase selective HER2 degradation and self-destruction of HER2-overexpressing tumor cells.

There is still a long way to go, however, before something like HApt-tFNA is used in the clinic. For example, the cell-killing effects of HApt-tFNA was relatively weak and has not been compared yet to the effects of the antibody treatment it would replace. However, tFNA is a useful carrier in that multiple drugs can be attached to it—not just one as in the current study—so that may be a potential avenue for improvement. Detailed studies will also be needed for the anti-tumor activity in animal models like mice before any application into humans. Still, there is much promise for DNA nanoparticles as anti-tumor therapies, and these experiments with HApt-tFNA take us one step further in the development of cancer treatment.