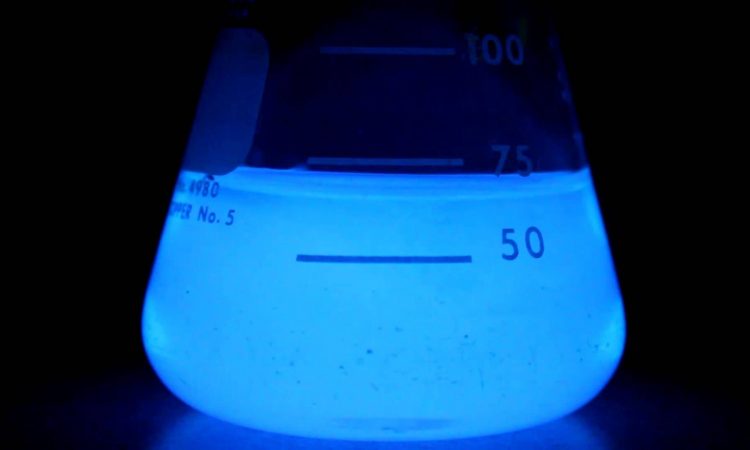 Crime scene technicians perform numerous actions upon arrival at a crime: photographing the scene, cordoning off the perimeter, and collecting biological evidence like blood. However, not all bloodstains are apparent – some are latent – and require chemical reactions to become visible.

One such chemical is 3-aminophthalhydrazide, otherwise known as luminol (Figure 1). Luminol reacts in basic conditions with compounds catalyzed by hemoglobin in blood from peroxide. Hemoglobin contains Fe (II), which can break down peroxide molecules, and most luminol reagents are dissolved water with sodium hydroxide (to obtain basic conditions) and peroxide. The iron acts as an oxidant and reduces peroxide to oxygen (O2) and hydroxide ions (OH–). Luminol first reacts with the OH– to produce an unstable dianion (an ion with two negative charges), then reacts with O2 and forms an excited state dianion (Figure 1). As the dianion releases energy, it emits a characteristic blue glow, called chemiluminescence (CL). Notably, in pure darkness, luminol is more sensitive to blood than other blood-detecting reagents like phenolphthalein (used in the Kastle-Meyer blood test) or Hemastix (a commercially available alternative) that produce colored reactions. Color-based tests can be misinterpreted, as the pink color produced can be difficult to see between technicians, not to mention those with red-green color blindness.

However, little information exists on the impact of visible light on luminol’s CL properties. When crime scene techs finish spraying the scene, is the CL reaction impacted by how long the bloodstain was exposed to visible light? The answer to this question can greatly impact how crime scene technicians analyze crimes committed outside in areas exposed to sunlight, such as in hit-and-runs.

Saaya et al. hypothesized that exposure to sunlight would induce photochemical reactions and affect luminol’s chemiluminescence. Their initial experiments demonstrated that visible light irradiation – i.e. exposure to radiation, in this case, six specific wavelengths in the visible light spectrum – did not significantly affect the characteristic 415 nm Fe (II) peak in hemoglobin, nor cause degradation to Fe (III). However, the time for maximum CL decreased from 17 sec to 9 sec after visible light irradiation (Figure 2), suggesting that the rate of the luminol-hemoglobin reaction is increased after irradiation. This acceleration effect had a linear relationship to the amount of irradiation time, and they further deduced that singlet molecular oxygen (1O2) impacted the reaction rate, explained further in the article. Their conclusion stemmed from additional experiments performed under an inert argon atmosphere, as no impact was seen to the luminol CL production in irradiated vs non-irradiated light in these conditions.

The authors concluded that 1O2 must impact the hemoglobin protein to increase luminol’s chemiluminescent property and proposed the mechanism shown in Figure 4. But to understand the mechanism, a little background on electronic states is needed. Singlet oxygen (1O2) is the lowest excited state of molecular oxygen (O2) produced from irradiation (represented as hv in the figure). Normally, O2 has evenly filled orbitals, where all the electrons are balanced in a way to prevent too much electron density on one oxygen atom. This is called the ground state or triplet state (Figure 3 left). The triplet state (3O2) is so named due to the three ways the ground state’s highest energy electrons can be arranged (red arrows left): either two up spins, two down spins, or one up and one down. However, when new energy is introduced into the system, imbalance can occur, and temporarily increase the energy of the oxygen molecule to the excited state – called singlet oxygen (1O2). In singlet oxygen, instead of the highest energy electrons evenly distributed in the orbitals, the electrons pair together and leave an orbital empty, creating more electron density on one oxygen atom (Fig 3 right, red arrows).

The authors theorized that a heme (a molecule in hemoglobin with an iron atom interacting with nitrogen-containing rings) in the excited state transfers electrons to 3O2, forming 1O2 and a ground state heme. The 1O2 attacks and damages the hemoglobin, releasing Fe (II) from the protein and into the solution, thereby increasing substrate availability and accelerating the luminol reaction. This mechanism is further supported by previous conclusions from Stoica et al., who studied how urea, a protein denaturant, impacts hemoglobin and observed a similar increase in luminol’s chemiluminescence.

Saaya et al. performed one of the first quantitative investigations into the effect of visible light on the forensic luminol reaction and explained  their results that  complements previous knowledge in the field. Most interestingly, they stated that visible light irradiation prior to applying the luminol reaction can increase sensitivity – a novel idea with potential application for field use. For example, in cases with latent bloodstains on vehicles, exposing the sample to a red light could increase the luminol reaction’s sensitivity and reveal evidence otherwise unaffected by the reaction.