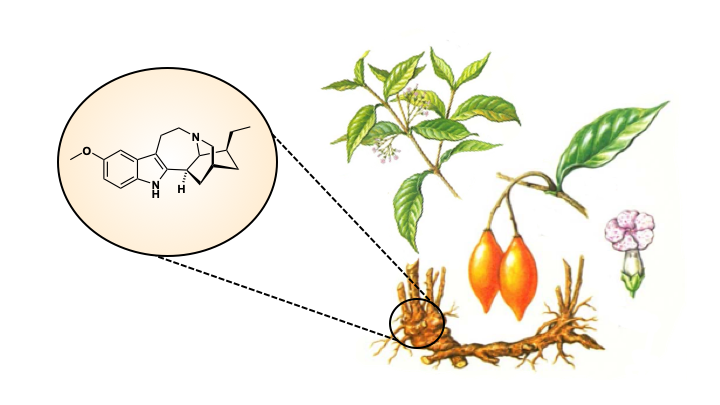 Opioid addiction and overdose are significant public health issues world-wide. According to the National Institute on Drug Abuse, more than 130 people die every day in the United States due to opioid overdose (1). Opioids are a class of molecules that include morphine, heroin and a range of commonly prescribed pain medication (Figure 1). It was once thought that addiction arose from a lack of willpower or immoral beliefs, however, it is now known that the molecular basis of addiction is complex, and it is recognised as a chronic disease that changes brain structure and function. Unfortunately, strategies for the treatment of addiction remain limited, they include psychotherapy, self-care and some medications.

Ibogaine and voacangine are alkaloid natural products derived from the Tabernanthe iboga (Iboga) plant of Central Africa (Figure 2) and have potential as anti-addictive agents. These molecules have been shown to reduce the cravings and withdrawal symptoms experienced by people addicted to opioids. Their exact mechanism of action is complex and not well-understood, but it is thought that they interact with serotonin, opioid and nicotine receptors in the body. Furthermore, there is evidence to suggest these molecules can reverse the effects of opioids on the brain, meaning they not only help with the short-term craving and withdrawal symptoms, but may also cure the long-term effects of addiction (2).

An alternative to the total chemical synthesis of complex organic molecules is biosynthesis. Biosynthesis refers to the enzymatic cascade reactions that living organisms can perform to convert starting materials into complex products. Our own bodies can perform billions of chemical reactions per second, far more than an organic chemist can achieve in a laboratory! What’s more, enzymes, as biological catalysts, can achieve reactions with great selectivity and produce excellent yields under extremely mild conditions, such as in water and at room temperature without toxic additives. Therefore, to achieve challenging synthetic goals, organic chemists can look to these biosynthetic pathways for inspiration. Chemists are now able to hijack evolutionary machinery and use natural enzymes, or re-engineered enzymes to perform chemical reactions of their choosing. This type of bio-inspired synthetic chemistry is an emerging field particularly within the area of natural product synthesis.

Recently, a team of chemists and biochemists synthesised ibogaine and voacangine via semi-synthetic and biosynthetic strategies. The researchers first had to determine the biosynthetic pathway utilised by the iboga plant to make ibogaine and voacangine. To do this, they looked at catharanthine, a molecule structurally similar to ibogaine. Catharanthine is a natural product that comes from the Catharanthus roseus plant (Figure 4) and has a known biosynthetic pathway. The researchers proposed that since catharanthine has a comparable structural scaffold to ibogaine, the two may be synthesised in similar ways.

By comparing the genetic make-up of these two plant species, they found that the iboga plant did indeed have genetic components that were related to those in the biosynthetic pathway of catharanthine. They therefore decided to test if these equivalent genetic components could make up the biosynthetic pathway for ibogaine. The researchers produced the relevant enzymes through protein expression. They then took the molecule known to be at the start of the biosynthetic pathway for catharanthine, stemmadenine acetate, and subjected it to chemical reactions using the enzymes that they had produced. They found that using their produced enzymes did in fact lead to the synthesis of the expected molecules in the biosynthetic pathway. After optimising their enzymes and reaction conditions, the researchers were able to produce voacangine in 4 enzymatic steps, and ibogaine in 5 enzymatic steps and one heating step (Figure 5). Their work represents the first biocatalytic production of ibogaine. This discovery not only provides an efficient method for the synthesis of voacangine and ibogaine, but may also provide a useful way to produce structurally related analogues of these molecules that could have attractive properties and medicinal significance.

Ibogaine and voacangine are very interesting and complex natural products that have the potential to help people affected by addiction. Although their exact mechanism of action is unknown, and there have been reports of toxic side effects, a greater understanding of these molecules could lead to the development of a safe and effective therapeutic (2). Due to their complex structures, looking to nature for synthetic inspiration provides a good way to make and study these molecules.