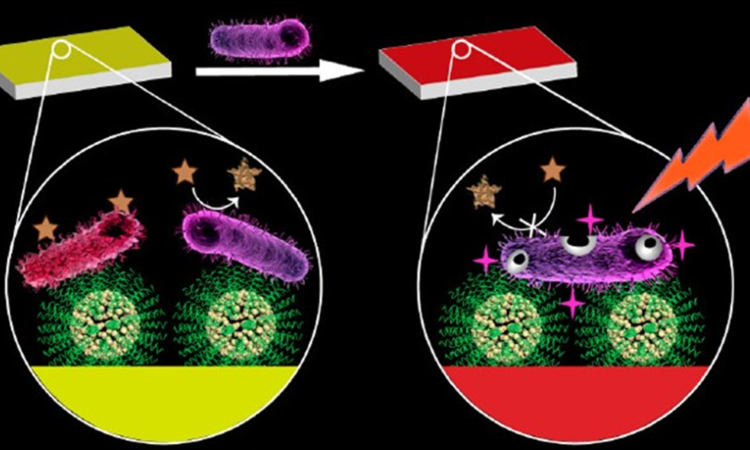 Ah, bacteria. Our old friends… and nemeses. While we live symbiotically with many types of bacteria—the average person is estimated to have about 38 trillion bacterial cells in their body—there are also, of course, many which cause us harm. Antibiotics are drugs which damage and kill bacterial cells, but there now exist strains that are drug-resistant. We have other ways of killing bacteria; for example, by irradiating them with high-energy light to damage their cell walls. But such techniques can harm healthy human cells as well. So, there is a need for techniques to more specifically target the treatment of drug-resistant bacteria in order to minimize undesirable side effects.

Sun et. al. have developed a type of paper-based band-aid that not only detects the presence of bacteria on an open wound, but identifies whether or not the bacteria are drug-resistant, and applies the relevant treatment accordingly. How can a simple band-aid do so? Well, bacteria affect their local environment in ways which are chemically distinguishable. For most infectious bacteria in general, they can be detected by an increase in the acidity of their environment due to their fermentation of sugars for energy. So, Sun et. al. designed their band-aid to be coated with a metal-organic framework containing ampicillin—a common antibiotic. When this structure hits an acidic environment (in other words, when it finds a bacterial infection), this causes the ampicillin to be released, killing any drug-sensitive bacteria. That’s great—but what if there are drug resistant bacteria involved?

This is where the band-aid color indicator comes in. Did you like getting fun-colored band-aids as a kid? Well, this tech takes that to the next level. These band-aids contain a chemical called bromothymol blue, which starts out green, but turns yellow in an acidic environment to identify the presence of bacteria. But how to chemically identify drug-resistant bacteria? Well, there are many types of resistance, so for this study Sun et. al. chose to focus on resistance to beta-lactam antibiotics (which include the famous penicillins), as these are frequently used and the medical field is especially concerned about resistance to them.  Beta-lactamases are the enzymes produced by these particular drug-resistant bacteria, and are hence the key to their detection. Nitrocefin is a chemical which turns red in the presence of beta-lactamase, and so Sun et. al. incorporated it into the surface of their high-tech band-aid in order to be able to identify by eye when drug-resistant bacteria are present in a wound (Figure 1).

If the band-aid did turn red and identify the presence of drug-resistant bacteria, the researchers then irradiated the area with visible light to cause reactive oxygen species to form on the metal organic framework on the band-aid, damaging the drug-resistant bacteria. This light-based strategy is called photodynamic therapy. To show that both the chemical antibiotic and the photo-therapy were effective for their respective purposes, the researchers were able to take electron microscope images of both drug-sensitive and drug-resistant E. coli bacterial cells (Figure 2). The images show that without any treatment, the cell walls remain intact. With ampicillin chemical treatment, the drug-sensitive cell walls begin to wrinkle and break, while the drug-resistant cells remain whole. With both chemical and photodynamic therapy, however, the drug-resistant cell walls also show damage—success!

Of course, that’s not the end of the story—studies need to be carried out on live tissue. So, Sun et. al. studied the effects of the band-aid treatments on the wounds of both tomatoes and mice (who knew those two could appear in the same study?). On tomatoes, a mixture of both drug-sensitive and resistant E. coli were placed on their surface, and the band-aid treatment was applied. A similar technique was applied to small back-wounds on mice. In both studies, the researchers found that the combination of antibiotic and light treatment was able to successfully eliminate the infection (Figure 3). In fact, it only took three days for the mice wounds to almost completely heal over!

While many more clinical studies must be done before technology such as this can become a practical reality, Sun et. al. have made an exciting start. The medical field has already widely applied the use of paper-based devices as cheap, lightweight, and transportable biosensors. But simultaneous treatment—in addition to sensing—has not yet been achieved for such devices. The faster and more targeted treatments for drug-resistant bacterial infections we can achieve, the easier it will be to ease the burden on healthcare providers, and improve quality-of-life for citizens around the globe.