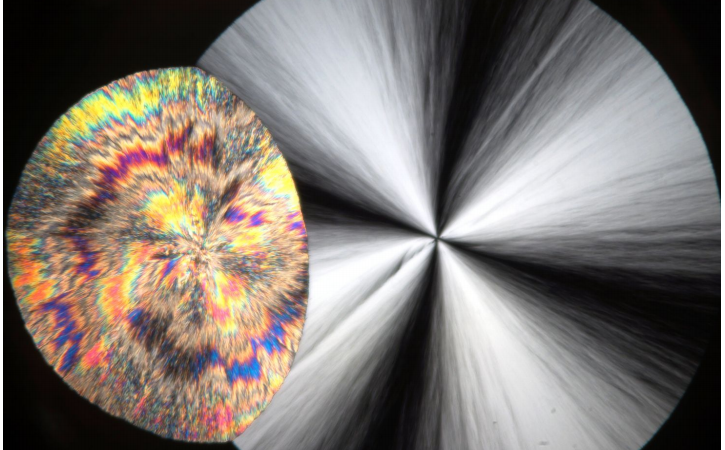 Featured image and figures reproduced or adapted with permission. Further permissions related to the material excerpted should be directed to the ACS.

Title: Polyamorphism Mirrors Polymorphism in the Liquid-Liquid Transition of a Molecular Liquid

If you put a bottle of water in the freezer for a short period of time under just the right circumstances, upon removing it you may witness the water inside freeze instantaneously, spreading throughout the bottle. This demonstrates the fascinating phenomenon of a “supercooled” liquid, for which a phase transition is avoided despite being cooled down beneath its freezing point. When the bottle is removed from the freezer, the water is disturbed, and this movement can seed an ice crystal that spreads throughout the bottle.

When it comes to examining atypical phase transitions, a popular molecule to study is triphenyl phosphite (TPP). Just like water, this molecule can be supercooled. TPP is also similar to water in that it has strong interactions with itself. However, while water interactions are due to strong hydrogen bonding, TPP interacts with itself via pi stacking –specifically the stacking of its phenyl groups. This can stabilize different configurations, two of which are shown in Figure 1.

It is well-known that molecules in the solid state are capable of existing in multiple phases (i.e. polymorphs) by adopting different configurations, though for molecules like TPP, multiple phases of liquid may be observed as well. Even though liquids by definition consist of molecules constantly moving past each other, long range order can still exist. Different types of order can dominate depending on the temperature of the substance, especially at lower temperatures when there is less energy the molecules can use to move.

Properly describing the phases of supercooled TPP is controversial. When liquid TPP is cooled to near room temperature at 298 K (25 °C), it freezes to form a stable crystalline phase referred to as “crystal 2.” If the TPP is supercooled past this temperature it remains in the liquid phase, which is referred to as “liquid 1.” Further cooling of liquid 1 past 226 K makes the liquid more viscous and droplets can be viewed under the microscope, as is shown in Figure 2. The controversial question is does the appearance of these droplets below 226 K occur due to the formation of a second liquid phase (“liquid 2”), indicating the presence of a liquid-liquid transition? Or, do they indicate the arrested growth of solid nanocrystals that are formed but never grow into larger crystals?

There are a few reasons to think these droplet-like formations may be nanocrystals.  First of all, each droplet contains a unique pattern known as a “Maltese cross,” which is generally considered an indication of crystallinity in a polarization microscopy image as shown in Figure 2. Another reason in favor of the nanocrystal theory is that the growth rate of the droplets is consistent with the formation of nanocrystals seeding from the sides of those that have already formed.

To capture exactly how the phase of TPP changes, researchers performed infrared spectroscopy as the temperature was lowered. Infrared spectroscopy is sensitive to the environment around each molecule which is vital to characterizing how molecules are oriented relative to each other in different liquid and crystalline phases. Through this study, researchers were able to identify a unique infrared signature associated with at least four phases, including crystals 1 and 2 and liquids 1 and 2. This signature allowed them to conclude that the molecules in liquid 1 and liquid 2 are oriented in a way similar to those in crystal 1 and crystal 2, respectively (and hence the naming scheme). Microscopy images of these two crystalline forms are depicted in the image at the top of the page (left: crystal 1, right: crystal 2).

Ultimately though, there are differences between the vibrational signature of the crystals and liquids, and this is further confirmed with an additional type of vibrational spectroscopy: Raman spectroscopy. Through Raman spectroscopy, the different phases of TPP can be categorized based on if they show smooth spectra–as is the case for liquids–or if they show distinct peaks that are indicative of the vibrational modes present in crystals (see crystals 1 and 2 versus liquids 1 and 2 in Figure 3). The peaks in the Raman spectrum of a molecule can be blurred out in the liquid form because a liquid’s molecular environment is ever-changing.

By identifying the similarities between the liquid phases and their associated crystal phases, researchers were able to explain that the reason this second liquid phase exists is due to the concept of geometric and kinetic “frustration.” Essentially, the molecules start aggregating, but the aggregations cannot properly fit together, so the molecules are forced to stay in the liquid form. The difference between a liquid and a solid in this case is like the difference between a box of cubes and a box of spheres. The cubes can be arranged in a way such that there is no empty space between each cube, and their positions remain fixed. This is not true for the spheres, so they are not “locked” into place and will continue to slide past each other. Liquid 2 is like the box of spheres in this case. It cannot form an extended crystalline solid because the droplets of liquid 2 do not fit well together.

Even though researchers have found convincing evidence that a liquid-liquid transition is occurring in TPP, the full picture is still complicated. If you recall, researchers also saw a faint Maltese cross in the droplets, indicating crystallinity. Further characterization by polarization microscopy revealed that there was actually a very low (<2%) degree of crystallinity in these droplets. This indicates that both phenomena are in effect: a liquid-liquid transition is occurring at the same time as the formation of nanocrystals! Overall, these results lay the framework for better understanding liquid-liquid transitions for other molecules, including water.