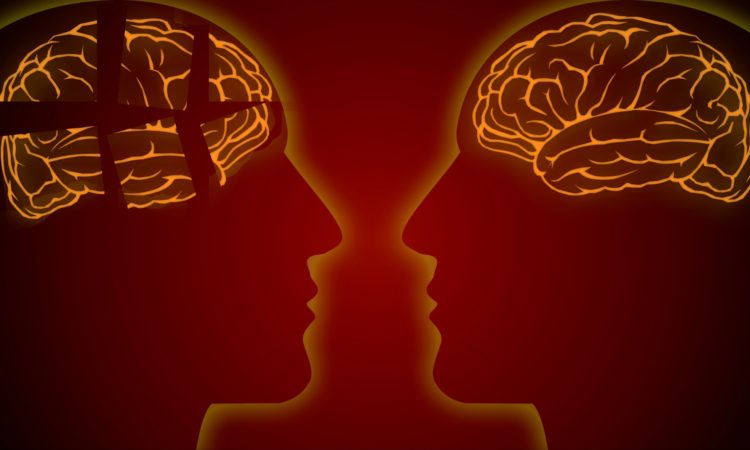 Alzheimer’s disease (AD) is a devastating neurodegenerative disorder causing serious symptoms that can be extremely difficult to manage. It is the most common form of dementia, characterised by a progressive decline in cognitive function. AD suffers develop disturbance of brain functions including memory, thinking, orientation, comprehension, language and judgement which worsen over time and can lead to complete loss of independence.1

Around 50 million people live with Alzheimer’s disease (AD) worldwide, and it has been studied for over 100 years, yet its exact cause is still not fully understood. There is no known cure for AD and only minimal treatment options.

An indicator of AD is the presence of amyloid β (Aβ) peptide in the brain (figure 1). Aβ peptides can form toxic aggregates and it is widely believed these are one of the main causes of AD.2 You could almost imagine these aggregates in the brain to be like rust on the structure of buildings, increasing over time and causing serious damage.

It is also known that the aggregation state and toxicity of Aβ peptides may be modulated by metal ions such as Ca2+ and Zn2+.3,4  Therefore, controlling the metal-free Aβ aggregation as well as metal-mediated Aβ aggregation could be a potential treatment avenue for AD.

Another chemical species thought to play a part in AD are reactive oxygen species (ROS). As their name suggests, these are highly chemically reactive species containing oxygen, which are often free radicals, such as superoxides. ROS play a critical role in normal cellular function and under normal conditions their production and removal is tightly regulated. However, this balance can sometimes be disturbed, leading to an excess of free radicals.

Free radicals are unstable and highly reactive, so they can cause serious damage. This could be likened to an angry bull running through a china shop, except instead of china, it is cellular components such as lipids, protein and DNA being damaged. Because a high level of oxygen metabolism occurs in the brain, large amounts of ROS are produced, and can damage neurons. This ROS mediated neuronal damage is thought to play a role in neurodegenerative diseases like AD.5

So now you can imagine the brain is like a rusty building with an angry bull running around inside- no wonder the damage is so serious!

Recently, researchers from the Lim group wanted to develop molecules that could target both Aβ peptides and ROS in AD. Previous work has indicated redox-active molecules may be able to react with both of these species.7 Therefore, Lim and co-workers designed and prepared 10 very simple bifunctional aromatic compounds that they believed may have good redox properties, that is, they have the ability to undergo oxidation and reduction reactions. These were divided into two groups, group I made up of electron-rich species and group II made up of electron-poor species (figure 2). They used cyclic voltammetry to investigate the redox activity of their molecules, determining that group I species had better redox properties.

The researchers then wanted to measure the antioxidant capacity of their molecules. To do this, they performed Trolox equivalent antioxidant assays. This assay measures the ability of a given compound to quench free radicals, (or calm down the angry bull), compared to a known antioxidant Trolox, an analogue of vitamin C. The assay results confirmed that the molecules in group I did exhibit antioxidant activities, as expected based on their determined redox activity.

After proving that their molecules were redox active and had antioxidant properties, Lim and co-workers sought to determine what effect they may have on Aβ peptides. Could they remove the damaging rust?

Lim and co-workers tested the ability of their molecules to disrupt aggregation of Aβ or disassemble pre-formed Aβ aggregates in the presence and absence of metal ions (figure 3). They used gel electrophoresis and western blot analysis to visualise aggregation activity. The gel electrophoresis experiments showed that subjecting Aβ aggregates to their group I compounds, produced large amounts of smaller Aβ species, as seen by the smear in lanes 1, 2, 3 and 4 in figure 3. This was shown both with and without metal ions.

Lim and co-workers also used transition electron microscopy (TEM) to visualise aggregation activity. The TEM images supported the results of the electrophoresis experiments, showing that their compounds produced smaller Aβ species compared to controls (figure 4). These are great results, as these smaller Aβ species are known to be less toxic than large aggregates.7

After these encouraging results, Lim and co-workers measured the cell toxicity and metabolic stability of their compounds. Compound 1 from group I showed the least toxicity and greatest stability so it was selected for further testing. Compound 1 was tested in a genetically modified mouse model that exhibits the symptoms of AD onset and cognitive decline. It was found that giving compound 1 to these mice lead to reduced levels of Aβ deposits in the brain, and improved cognitive function in behavioural tests compared to control mice. This is a very interesting result, supporting the theory that multifunctional redox-active species could in fact be useful in treating AD.

AD is certainly one of the most complicated diseases known to humans. While AD research still has a long way to go, the results of this study are promising and highlight a new class of compounds which may be useful in further investigations.

The simplicity of the aromatic compounds used also suggests that sometimes the most complex problems might actually have very simple solutions!