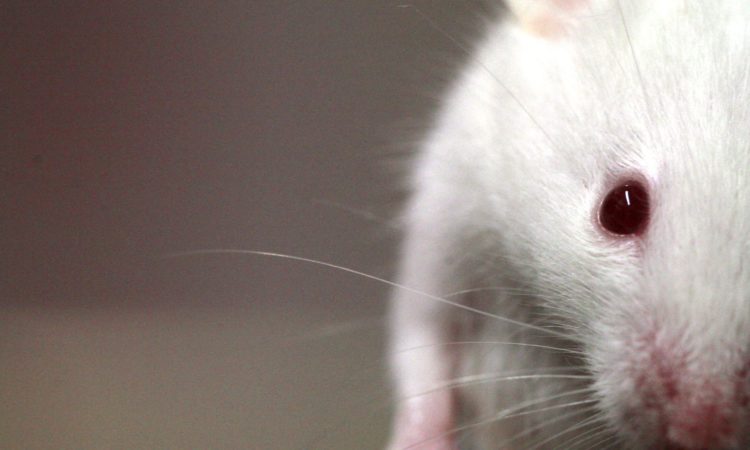 Image Credit: Lab mouse from Rama, wikicommons. All other figures from paper

Cancer cells can produce tumors that contain only small amounts of oxygen, creating what is called a hypoxic environment. This hypoxia results in high levels of hydrogen peroxide (H2O2) in cells and changes in the tumor cells’ metabolism, which can cause cancer therapies to fail because they do not produce the radicals that would lead to DNA damage and cell death in a normal oxygen environment.. Researchers from The University of Chicago recently published a potential method to increase the oxygen concentration in cells.

The method uses a type of compound called metal-organic frameworks (MOFs). MOFs are relatively large chemical structures that feature a cage of organic molecules surrounding one or more metal atoms. The researchers synthesized a MOF containing a derivative of the organic molecule porphyrin, the metal hafnium, and an iron atom. They called this complex Hf-DBP-Fe. The structure of this compound can be found in Figure 1. This complex mimics the enzyme catalase, which uses iron to break down hydrogen peroxide into water and oxygen in cells.

When Hf-DBP-Fe was placed in an aqueous solution of hydrogen peroxide for 4 hours, the hydrogen peroxide decomposed as measured by its fluorescence signal. When no-Fe and no-MOF controls were performed, most of the hydrogen peroxide remained in solution after 4 hours. The iron-containing compound produced significantly more oxygen and hydroxyl radical than did either the complex without iron or the control samples (Figure 2).

Figure 2: Hf-DBP-Fe is much more effective at breaking down hydrogen peroxide than the same complex without iron or the control solution (Figure 3a-c in text)

The researchers then determined that Hf-DBP-Fe could successfully enter MC38 cells, which are derived from mouse colon cancer cells. They found that cells treated with Hf-DBP-Fe had less hydrogen peroxide and more oxygen and hydroxyl radical than control cells or cells treated with a compound that lacked either the iron or the hafnium atoms. When the cells were treated with x-rays to simulate radiotherapy in cancer treatment, cells containing both the compound with and without the iron atom died at similar rates when there was oxygen present. However, the radiotherapy was much more effective with the iron-containing Hf-DBP-Fe when the cells were grown under hypoxic conditions.

Finally, mice were injected with a large and a small dose of cancerous cells to produce a large and a small tumor in each mouse. The big tumor was locally treated with Hf-DBP-Fe, followed by x-ray irradiation. The mice were then given three injections of anti-PD-L1 antibody, a treatment that uses the immune system to attack tumors. Hf-DBP-Fe alone was able to treat the big tumor but did not affect the smaller distant tumor. The antibodies and Hf-DBP-Fe together, however, shrunk both tumors. The mice treated with this combination also showed increased immune activity at both tumors and, when they were reinjected with tumor cells 4 weeks later, did not develop new tumors. However, when challenged with a third injection of tumor cells after 136 days, these mice developed tumors as easily as the control group, indicating that the treatment temporarily activating the immune system to fight tumors throughout the body and giving a sense of the longevity of the immune response.