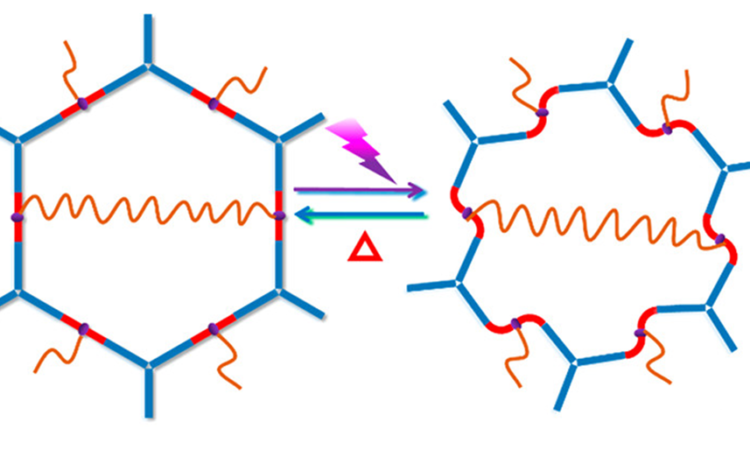 Glowsticks, handwarmers, color-changing mugs—these are just a few examples of products whose chemical and material properties change in response to a stimulus, whether that be heat, light, air, moisture, physical force, or any number of changes to the environment. Materials scientists are always on the hunt for new and better ways of controlling material properties, and today we’ll take a look at one research group’s recent innovation: light-controlled artificial muscles.

Light is a great choice of stimulus for a number of reasons; it allows for “wireless” control, it’s a clean and non-toxic readily available resource, its wavelengths and intensity can be tuned, and overall it can be very cost-effective. However, despite how easy it is to shine light on a material, the actual process of converting light into molecular motion in these so-called ‘photomechanical’ materials remains inefficient. This is because most photomechanical materials today are polymer-based and have no long-range order (not unlike a pile of tangled spaghetti). Think of it this way—if you arrange a bunch of dominoes in a random pattern across the floor, and then knock one over, you’re unlikely to get as many fallen dominoes as if you organized them in a neat row so that each piece can affect the next. So if you want better efficiency for converting light to mechanical output, you want to shoot for a more organized chemical structure—in other words, a crystal!

However, traditional crystals come with their own disadvantages. Their rigid structure makes them inflexible, easily broken, and often difficult to manufacture in large bulk pieces. But this is exactly the type of problem that allows materials scientists really “flex” their innovative muscles… back in 2005, Dr. Omar Yaghi and coworkers developed the first covalent organic framework (COF): a type of material which is both crystalline and polymeric, combining the flexibility, strength, and ease of fabrication of polymers with the well-defined structure of crystals. So, with that in mind, let’s take a look at this recent publication by Guo et. al., which details one of the first successful creations of a mechanically-photoresponsive COF.

How do you make a COF respond to light? Well, Guo et. al. were able to insert an existing photoresponsive molecule—in this case, acylhydrazone—into their COF skeleton. The acylhydrazone undergoes what’s called “configurational switching” when exposed to ultraviolet (UV) light. Specifically, it switches between two chemical isomers: the longer, “E” isomer, and the shorter “Z” isomer form (Figure 1a). On a macro level, when the Z isomer is triggered, the material decreases in volume. As a result, when UV light is directed at one just one side of a strip of the COF, the entire material bends in response—similar to the mechanism by which our own muscles move by contraction! The slight difference being, of course, that our muscles are not light-controlled. In these COFs, the reverse of the bending effect can be induced with blue light or heat (Figures 1b and c).

Guo et. al. also did extensive characterization of their new light-controlled artificial muscle COF using a variety of techniques. They used infrared spectroscopy and nuclear magnetic resonance (NMR) to identify the occurrence of certain chemical bonds (C=N, C-H, and C-O), which provided evidence of their specific polymer component of the COF. Next, scanning electron microscopy provided images of micrometer-level features to confirm that the COF was uniform throughout it’s height and held it’s shape well without need of support. They also tested mechanical properties—one sample of 14 µm thick COF was able to lift 100 g without damage; that’s the equivalent of a very thin human hair lifting a bar of soap! Finally, the researchers tested the extent of the photomechanical response through several cycles of light induced bending and re-straightening, which showed an impressive durability in the material over time.

While these particular artificial muscles may not be used to control the movements of your favorite robot any time soon, this study presents an exciting new structure for photomechanical smart materials. The more we can enhance our control over material properties, via a variety of stimuli and synthesis methods, the better and more attainable we can make such new technologies.