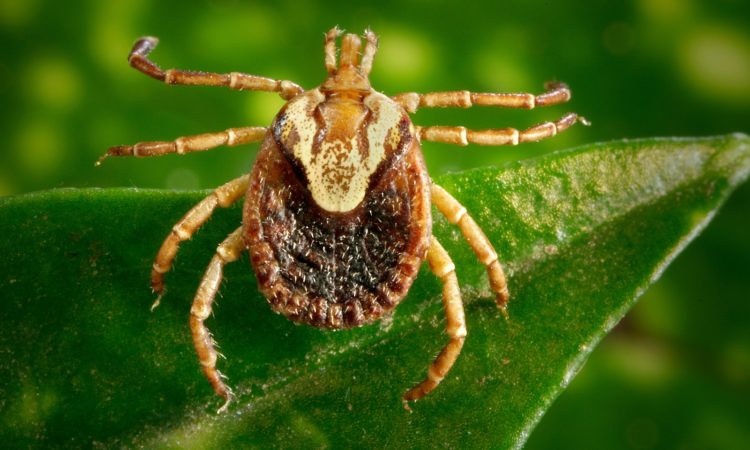 Paper: Semisynthesis of an evasin from tick saliva reveals a critical role of tyrosine sulfation for chemokine binding and inhibition.
Journal: Proceedings of the National Academy of Sciences of the United States of America.

Feature image by the Centers for Disease Control and Prevention (public domain).

Most people would consider ticks to be annoying, gross and potentially harmful parasites. But what if the very thing that makes ticks so successful as parasites, could help us treat human disease?

Like all creatures, ticks have evolved over time to ensure they have the best chance of survival. Ticks bite a host and feed on blood, so to facilitate this, they secrete a range of chemicals into the bite site. These include painkillers, anticoagulants and vasodilators. Interestingly, ticks also produce anti-inflammatory proteins to help prevent an inflammatory response in the host and allow ticks to stay happily attached and feeding without the host noticing.

While these anti-inflammatory chemicals are troublesome for humans while a tick is sucking our blood, they could actually be very useful in treating certain immune and inflammatory diseases. One class of anti-inflammatory proteins that were discovered in ticks are the ‘evasins’ which were discovered from the tick Rhipicephalus sanguineus. Evasins target chemokines, which are small proteins produced by immune cells that can modulate inflammation. Chemokines are known to be involved in chronic inflammatory diseases, tumorigenesis, metastasis and some autoimmune diseases. Some evasins have already shown promise as anti-inflammatory drugs in mouse studies due to their ability to inhibit chemokine activity.

Ticks are very small, so you can imagine that if one particular molecule produced by a tick became a drug, it would not be practical to keep extracting it from tiny ticks. Two other options to get larger amounts of the protein are bacterial expression and chemical synthesis, the age-old battle of biology vs chemistry! For larger proteins, chemical synthesis is challenging, and bacterial expression often produces better yields while also having the advantage of producing folded proteins. One problem with bacterial expression however, is that you can’t always easily express proteins that have post-translational modifications. Just like cars can be upgraded after they leave the factory, proteins can also be ‘upgraded’ (modified) after they have been synthesised. These modifications can be vital for protein function. Producing proteins by chemical synthesis makes incorporation of post-translational modifications possible, so you can see that both protein production strategies have their advantages.

Recently, researchers in the Payne group, became interested in the evasin protein ACA-01, discovered from the Amblyomma cajennense tick. They identified that the protein contained tyrosine residues that were in-between acidic amino acids, like aspartic acid and glutamate (figure 2). This is a known motif for tyrosine sulfation, a common protein post translational modification. Payne and co-workers have previously shown that ACA-01 expressed in bacteria without tyrosine sulfation has anti-inflammatory activity, so they decided to investigate whether tyrosine sulfation could improve this activity.

The researchers decided to use a ‘best of both worlds’ synthesis approach, by expressing one portion of the protein in bacteria, synthesising one portion by solid phase peptide synthesis (SPPS), and joining the two portions by native chemical ligation (figures 3 and 4). This approach allowed them to synthesise sulfated variants of the protein as required, without compromising on yield due to the large size of ACA-01.

Payne and co-workers were able to successfully synthesise 3 sulfated versions of ACA-01, via their semisynthesis strategy. They then tested the ability of their compounds to bind and inhibit chemokines. They found that their sulfated versions of their protein had much better activity than the unsulfated form (figures 6 and 7) proving the importance of this post-translational modification and validating their synthetic approach.

Although there would still be a long way to go before these molecules could become anti-inflammatory drugs, this paper highlights two important lessons: 1) ticks might not be as evil as you think and 2) sometimes it’s important to mix and match and use the best techniques from different fields to solve scientific challenges!