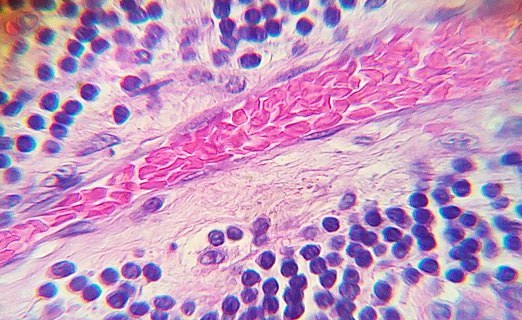 Inflammation or clots in human blood vessels can cause serious disease. Treating these diseases requires the ability to study the blood vessels’ behavior in an environment similar to the human body. In the body, blood vessels are subject both to changes in blood flow as well as mechanical forces, including stretching. This makes it challenging to study drugs and diseases that influence blood vessels without an animal model, but animal models are expensive and can provide only limited sample sizes.  Researchers from Japan and Singapore recently used 3D printing technology to develop a model of blood vessels.

To build the blood vessel, the researchers 3D printed a blood vessel about 0.2 to 0.5 mm across in polyvinyl acetate (PVA), a hard, inexpensive, and water-soluble polymer. They encased this polymer in gelatin and then used water to dissolve the PVA, leaving an empty channel with two motorized stages on either side. The researchers moved the stages to apply stretch and strain perpendicular to the direction of the channel and used a syringe pump to flow fluid through the vessel (Figure 1).

To mimic the behavior of real blood vessels, the researchers cultured human umbilical vein endothelial cells (HUVECs) on the interior of the channels. When these cells were cultured with fluid flow through the channel or with stretching forces applied, they observed growth parallel with the direction of the channel. Microscopy studies showed that the width of the channels could be accurately predicted using linear regression of the width of the 3D printed channels, although with some noise because of the limits on the precision of the printer use.

After three days of culturing the HUVECs in the vessel, researchers ran a solution of water containing fluorescent microbeads through the microchannel while applying a stretching action to the system. As the channel was stretched and relaxed with fluid running through it, the cells moved repeatedly farther apart and then closer together again. The beads moved periodically forward and back with the repeated stretching and relaxing cycles but slowly moved forward through the channel in the direction of the fluid flow (Figure 2). The behavior of the cells in the channel could be observed microscopically in real-time through the clear gelatin casing, making this an interesting in vitro system for the study of disease processes and drug action on vascular systems.

The microchannels developed in this paper were limited by the resolution of the 3D printer, which could not produce fibers smaller than 0.2 mm in diameter or fibers without a degree of roughness on their surfaces. The fibers tended to swell when encased in gelatin, resulting in the smallest accessible channel accessible of about 0.3 mm diameter with some roughness at its edges. The authors note that better 3D printers or alternative fabrication techniques would enable control over the mold more precisely. The researchers are also interested in the possibility of adding multiple layers and types of cells into the microchannels to better mimic the complex behavior of real blood vessels.

As this technology develops, it could be used to test new drugs and medical techniques more quickly than using animal models or human test subjects and more accurately than using cells isolated in a petri dish. The researchers evaluated this system using microscopy, which allows real-time visualization of the behavior and any changes in the artificial blood vessel system, allowing scientists to better understand the mechanisms drugs and diseases use to impact blood vessels.