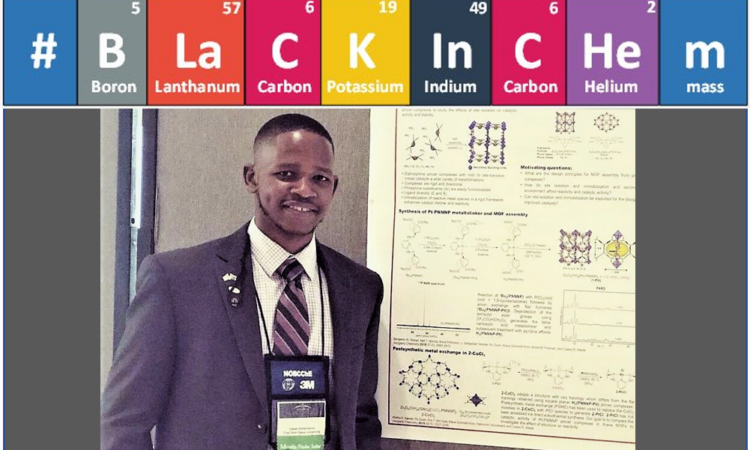 In the orientation week of his undergraduate degree at Rhodes University in South Africa, Zweli Hlatshwayo sat down in a packed lecture theatre. At the time, Zweli was unsure which scientific field he wanted to focus on. He had been influenced to pursue a science degree over engineering by his brother, who shared his passion for physics and maths.

That day, Professor Tebello Nyokong gave a short presentation about chemistry and nanotechnology research, and forever changed Zweli’s academic path. “I thought, wow, I want to be part of that!” he tells me enthusiastically. “I was inspired.”

From that point on, Zweli was determined to work with Professor Nyokong. In the third year of his undergraduate degree, he received an internship to work in her lab. Later, he completed a Masters under Professor Nyokong’s supervision, researching a cancer treatment called photo-dynamic therapy. After finishing his Masters, Zweli wanted to pursue his PhD overseas to broaden his research experience. In recognition of his academic achievements during his Masters, he was awarded a prestigious Fulbright scholarship for his PhD, and moved to Columbus, Ohio.

Zweli, who is currently a PhD candidate at Ohio State University, greets me over a video call with a bright smile and good humour, but becomes very earnest and thoughtful when speaking about his work and journey in chemistry. His current research focuses on creating porous materials, called covalent organic frameworks, that can capture carbon dioxide from the atmosphere. Metals are then added to these frameworks to catalyse the hydrogenation of carbon dioxide. This produces formic acid, which may be useful in applications such as hydrogen fuel. In the long-term, Zweli has ambitions to return to South Africa and establish a research institute that addresses health and environmental challenges.

Despite his many successes, Zweli speaks candidly of his struggles with isolation and impostor syndrome when he first started his PhD in the US. “When I first got here, I had no friends, no family and I didn’t have an opportunity to meet people.” Without his support network around him, Zweli’s inner negative voice became exposed, eroding his confidence. These feelings were compounded by being a minority in his program, both as a Black man and a non-American. “I felt like there would be judgement [from others] that I didn’t deserve to be here,” he tells me. “I felt like I was not enough… it was something I kept telling myself.”

Zweli felt the pressure to perform exceptionally in his program, and spent sleepless nights checking and rechecking simple calculations and analyses, anxious they were wrong, despite having easily done them many times before. He had difficulty coping with the doubt and negative thoughts that are part of the insidious cycle of impostor syndrome. “It certainly affected my mental health.” For Zweli, these feelings affected his life outside of his studies as well, and he recalls the confusion that came with losing his confidence driving in America. “I thought, wait, I used to teach people how to drive!”

Zweli’s breakthrough to overcome the worst of his impostor syndrome came at a NOBCChE conference, when a speaker shared his own experience. “His story was exactly like mine.” Zweli approached the speaker later, who shared advice on how to manage his feelings of doubt and inadequacy.

For Zweli, part of the solution was recognising his successes, no matter how small, and sharing and celebrating them with others. “[I] make sure that those [small successes] are known to me, and to people around me.” Another piece of advice which helped Zweli was setting boundaries to create a healthier work-life balance. “If I’m working from 8 ‘til 5, that should be it… there’s another day tomorrow.” By re-engaging with his hobbies in his spare time, Zweli has met people outside of chemistry research and built new networks. Now in the 2nd year of his PhD, Zweli has quieted his critical inner voice and his self-confidence has improved immensely both in and out of the lab. “I feel that given a project, I will complete it, and I didn’t feel like that before.”

Zweli’s decision to pursue chemistry was strongly influenced by working with Black chemistry professors, like Professor Nyokong, at Rhodes University, highlighting the importance of diverse representation in STEM. His first-hand experience with the challenges of being a minority in graduate school means Zweli wants to see better representation and support systems for Black students and academics at universities. Ohio State University has a NOBCChE chapter, which Zweli says helps “Black students see that there are other people in the department that look like them.” Campaigns like #BlackinChem highlight the achievements of Black people in chemistry, and Zweli hopes he can be a role model for the next generation of chemists. “What excites me is that I’m going to inspire people directly, and indirectly, by being successful in chemistry as a Black man.”