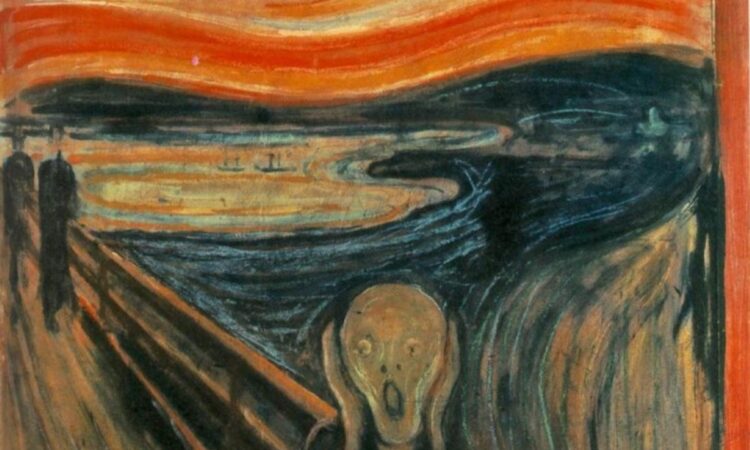 The Scream by Edvard Munch is one of the most famous and recognisable paintings of the modern world, depicting an experience of turmoil that Munch described as follows: “I walked one evening on a road. I was tired and ill — I stood looking out across the fjord — the sun was setting — the clouds were coloured red — like blood — I felt as though a scream went through nature — I thought I heard a scream. — I painted this picture —painted the clouds like real blood. The colours were screaming.”

The renowned painting is filled with vibrant yellows and reds, but, over the years these colours have been fading (Figure 1), a phenomenon that has also been observed in other famous works by Edvard Munch’s contemporaries including Vincent Van Gogh and Henri Matisse. One of the most noticeable problems is fading or flaking of bright yellows to beiges or greys, which has been seen in Wheat Stack Under a Cloudy Sky by Van Gogh, and The Joy of Life by Matisse. This unfortunate incidence has sparked global interest not only in the art world, but also amongst scientists.

The fading of cadmium yellow paint occurs when CdS degrades into uncoloured or less-brightly coloured products. The degradation pathway of CdS has been studied for around 15 years by a range of techniques including X-ray diffraction, scanning electron microscopy and, more recently, synchrotron radiation techniques. This has allowed for elemental and speciation mapping to uncover a range of potential degradation products including CdCO3, Cd(OH)2 CdC2O4 and CdSO4. An oxidative degradation pathway was first proposed, in which CdS pigment decomposes to CdO, CdSO4 and SO2 gas in presence of light. In humid conditions, SO2 gas can form H2SO4 acid. It has also been suggested that this acid could hydrolyse the ester triglycerides from the oily binding agent to form carboxylic acids, which could then undergo photo-redox chemistry to form the observed oxalates (CdC2O4). Furthermore, in presence of humidity, CdSO4 can turn into CdSO4.nH2O, which was found to be responsible for semi-transparent whiteish globules in the degraded paint.

Earlier this year, Millani and co-workers from the Italian National Research Council in Perugua, wanted to determine which internal and external factors played the largest role in cadmium yellow degradation in The Scream. They used spectroscopic techniques to analyse microsamples from the painting, and compared their results to artificially aged mock-ups. The paint mock-ups were made with cadmium yellow pigment powder from the early 20th century mixed with linseed oil (just as Munch used) and were subjected to various conditions, including UV-vis light in dry and moist conditions and thermal ageing in dry and moist conditions to mimic and compare with the condition of original painting.

The authors observed  degradation products such as CdCO3, CdSO4, CdSO4.nH2O and sulfites (SO32-) during their investigation of the samples from original painting. They also found Cd(OH)Cl and other inorganic Cl compounds, suggesting that the CdS used in The Scream was produced via wet process that involves precipitation of Cd from its salts. This hypothesis was further supported by low-crystallinity of the CdS in The Scream observed by UV-Vis-NIR spectroscopy. These findings therefore explained the presence of some of the observed salts (CdCO3, CdSO4), but the presence of sulfites (SO32-) still suggested oxidation of CdS. Furthermore, the artificially aged paint mock-ups were observed to have a similar composition of sulfites and sulfates to samples from the original painting, whereas before their artificial ageing they did not, thus suggesting the sulfites and sulfates were in-fact degradation products of the CdS.

The authors also uncovered a different mechanism of oxidative degradation in this work. They observed CdS degradation in dark conditions, which is contrary to the early suggestion that oxidative degradation was a light-induced process.  In presence of Cl compounds, CdS oxidation could occur in humid conditions without needing any light. The specific reactions and pathways taking place here are under further investigation by the authors. The mock-ups aged in moist conditions also showed recrystallisation of various water soluble salts to give globules that are also typical of faded paintings. Hence, these results suggest that water is actually more damaging to these paintings than light. Maybe museum curators will have to look to chemists to help them store paintings in anhydrous conditions!

This study gives great insight into the fading of the vibrant colours of The Scream, and may help determine how best to preserve the magnificent work for future generations. It also certainly shows that while art and science may sometimes seem like opposing fields, they can complement each other beautifully!