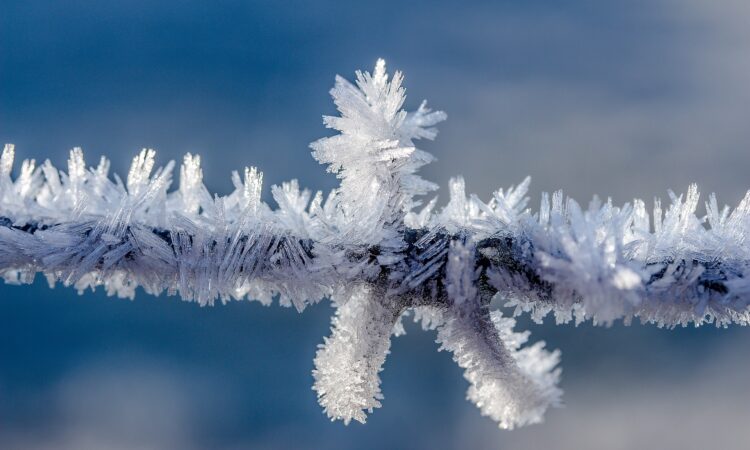 Water is one of the most ubiquitous and essential molecules for life on Earth. And yet, in its solid form, it can be extremely dangerous and very expensive to deal with. One estimate suggests that the US alone uses up to 24 million tonnes of de-icing salts on roads each year. De-icing salts cause damage to steel and concrete infrastructure, and the runoff can increase salinity in soil and waterways, harming ecosystems and the freshwater sources we rely on for drinking. In the aviation industry, even small amounts of ice can change the shape of the aircraft and alter how a plane will fly, making de-icing a critical safety issue. This process relies heavily on the use of propylene glycol as a de-icing agent and can cost thousands of dollars per aircraft.

In a new paper in ACS Nano, Boreyko and co-workers have reported electrostatically charged ice that can ‘jump’. Using high-speed photography, the researchers captured microscopic dendrites of ice detaching from the frost surface and jumping towards a water film above it.

Ice usually isn’t charged. Water is a polar molecule, but in order to create a net charge in water, the molecules need to align, with negative oxygen atoms on one side, and positive hydrogen atoms on the other. This typically only happens when water is exposed to an electrical field. The most common form of ice, known as hexagonal ice, also has no net charge. In the crystal structure for hexagonal ice, only the oxygen atoms have defined positions. The hydrogen atoms on the other hand, can occupy a number of different positions within the crystal structure and are equally likely to occupy any one of them. Ultimately, the hydrogen atoms end up randomly oriented and pointing in all directions, so the ice has no charge overall. If this is the case, where do the charges in ice come from?

The answer to this question is ionic defects. Positive hydronium ions (H3O+) and negative hydroxide ions (OH–) form spontaneously in ice in response to heat. Typically, in the structure of ice, each oxygen atom is associated with two hydrogen atoms. Sometimes, the crystal structure can “slip” across, resulting in a change in how many hydrogen ions are associated with each oxygen atom, and forming ionic defects. These defects always form in pairs of positive and negative defects, so as long as they are distributed evenly and arranged randomly throughout the ice, it will have no charge. That is, unless the temperature of your ice starts changing.

When a piece of ice contains a temperature gradient, more ionic defects will form in the warmer part of the ice. Similar to osmosis, where ions will move from high concentration to low concentrations, the ionic defects will diffuse from the warm side of the ice with many defects, to the cold side with fewer defects in an effort to equalise the distribution. However, there is a major difference in the diffusion rates of hydronium versus hydroxide. In the race to the cold side of the ice, hydronium defects outpace hydroxide defects by more than 3 times. And so, positive hydronium ions collect on the cold side of ice, whilst negative hydroxide ions stay on the warm side. This results in a difference in charge across the ice.

In the paper, the frost was grown on a cooled substrate, and the thin layer attached to this substrate was the coldest. The dendrites, which formed up above the surface, were warmer. As seen in Figure 2, the positive charges moved down towards the colder substrate, leaving negatively charged dendrites above them.

Above the ice, the water film became polarised in response to the electrostatic charge of the dendrites, arranging the positive hydrogen atoms towards the oppositely charged frost dendrites beneath it. The positive charge of the water attracts the negatively charged ice, causing it to detach and jump towards the water (Figure 3A). This phenomenon was only observed with polar liquids, like water, acetone, or ethylene glycol. Non-polar liquids have no capacity to form a charged film opposite the ice, and therefore lacked the ability to create an attractive force to pull the ice away from its substrate.

The researchers observed this frost jumping behaviour with water films placed up to 5mm away from the frost. Using high-speed photography, they calculated how fast the dendrites jumped by tracking their movement across each. As seen in Figure 3B, when the water was placed further away, the frost pieces took longer to detach, and didn’t accelerate as much during their jump. Essentially, the further away the frost was, the less force was exerted on it by the oppositely charged water film.

There’s still a lot to learn about this frost jumping behaviour, and the next step for the the researchers is to explore how to make larger pieces of ice jump. They suggest that by exerting a stronger charge above the ice with a charged electrode, the extra force on the ice could allow large sheets to detach from the surface and jump. This novel electrostatic method could potentially create a way to de-ice surfaces in the future that’s fast, better for the environment, and will help keep people safe on icy cold days.