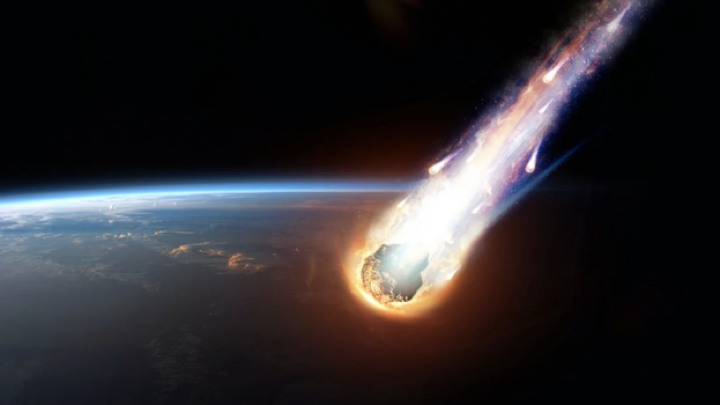 Title: Extraterrestrial ribose and other sugars in primitive meteorites

Many researchers think that the first lifeforms on Earth developed from non-living chemicals produced in the environment.  Which chemicals could have been available on early Earth to participate in this chemistry?  Clues from modern Earth are limited because modern microbes contaminate all environments.  Additionally, very few rocks remain from the early Earth, so the geological record provides limited information. However, there is one promising approach to figure out which chemicals are naturally present in lifeless environments: studying meteorites!

When meteorites crash to Earth, scientists get the opportunity to study the fragments in the lab.  Although no direct evidence for cellular life has been discovered on meteorites, many types of organic molecules have been discovered.  The non-living organic chemistry that occurs on these meteorites might have also occurred on the lifeless early Earth.  Certainly these types of organics could have been delivered to early Earth when meteorites crash land.  So the organic composition of meteorites provides important information about which building blocks might have been available for the origin of life on Earth.

Amino acids (building blocks of proteins), fatty acids (capable of forming membrane bilayers), and nitrogenous bases have all been previously detected within meteorites.  Detection of nitrogenous bases is exciting because they are important components of RNA (Fig 1), and the formation of RNA itself is usually considered one of the essential steps towards the origin of life.  A recent discovery by Furukawa et. al. adds to this excitement: ribose has now been found on meteorites as well!

In order to detect ribose, the researchers soaked pieces of the solid meteorite in aqueous solution.  Many organic molecules within the meteorite became dissolved in the solution.  Next the researchers used gas chromatography to separate the dissolved organic molecules from each other.  In gas chromatography, molecules are vaporized and flowed through a column.  The strength of interaction between each molecule and the column surface determines how quickly the molecule passes through the column.  In this way, molecules in a mixture can be separated from each other.  The researchers compared the molecules that they extracted from the meteorite with a known ribose sample, and they observed that some molecules from the meteorite took the same time to pass through the column as ribose (Fig 2E, 2G).  This is strong evidence that ribose was present within the meteorite.

Next the researchers needed to prove that this ribose was originally present within the meteorite when it landed on Earth, and that the presence of ribose is not a result of terrestrial contamination.  To do this, the researchers measured the ratio of stable carbon isotopes within the ribose (δ13C). Usually ribose produced on Earth is depleted in the heavy isotope Carbon-13 (δ13C < 0). But the ribose discovered within the meteorite samples was actually enriched in the heavy isotope (δ13C > 0)! This difference in carbon isotope ratios suggests that the molecules were synthesized from different sources (Fig 3).  These findings are consistent with an extraterrestrial origin for the ribose within the meteorites, effectively ruling out contamination.

This study by Furukawa et al. proves that ribose can be delivered to Earth via meteorites.  The implications of this finding are profound: ribose can be synthesized in the absence of life, and so ribose could have been available on the early Earth to participate in chemical reactions leading to the first life.

I am a graduate student in the Chemistry Department and Astrobiology Program at University of Washington. I study fatty acid membranes and roles that those membranes could have during the origins of life on Earth. I also enjoy mountain sports, cooking, and time travel movies.