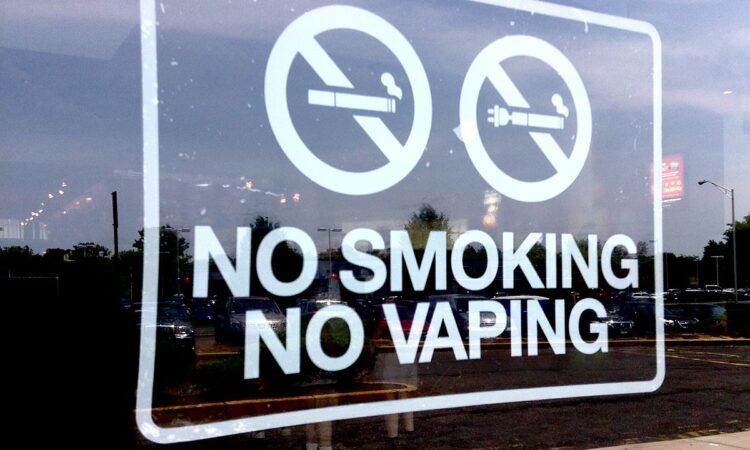 Over half of the United States has a statewide ban on smoking in enclosed public places, and local municipalities usually regulate smoking to get a similar outcome in states without this ban. It’s no wonder why – smoke from cigarettes has a strong and lingering presence, and the negative health effects from inhaling this smoke are well-known. The same things cannot be said for vaping. Vaping isn’t tightly regulated at the state level, with only 12 states banning public use of e-cigarettes in the same vein as conventional cigarettes. The exact health effects of vaping are unknown, with limited data and no long-term studies. Vaping can easily go undetected in a public space since the aerosol it produces is often odorless and disappears into the air as quickly as water vapor.

But vaping does not produce simple water vapor. While it is true that e-liquid is far less chemically complex than cigarettes, the claim of its proponents that it is a healthier alternative to tobacco products is controversial. Some researchers agree that vaping poses less of a risk because there is less toxic chemical exposure. Vaping may be a smart switch for smokers with a nicotine addiction. But others warn against understating the risks of vaping and worry that individuals who do not smoke will get hooked. Vaping is not risk-free and still exposes individuals to toxic chemicals that could cause harm to the lungs or body.

So what’s actually in e-liquid? E-liquid usually has at least three ingredients: nicotine, propylene glycol, and glycerol. Many also contain flavoring, which varies. But even if a cartridge only lists four ingredients, the individual using it inhales more than four chemicals. When you take a drag of an e-cigarette, a heating system is activated. The e-liquid is heated and produces a vapor you can then inhale. The metal coils that are used to heat the e-liquid can leach heavy metals, meaning that the aerosol then contains, for example, chromium or lead. The heating of the e-liquid also causes the ingredients to break down. Propylene glycol may turn into acetaldehyde and formaldehyde, both of which are known carcinogens. Glycerin produces acrolein, which can be toxic and irritating to our eyes, nasal passages, and skin (Figure 1).

Acetaldehyde, formaldehyde, and acrolein all have something in common: they contain an aldehyde. We recognize an aldehyde as a carbon with a double bond to an oxygen (a carbonyl, C=O) and a bond to hydrogen, with the remaining bond to any generic R group. Aldehydes are a very reactive functional group and often form adducts with proteins. This can change protein structure and therefore protein function, which can disrupt normal cell activities. Disruption of a cell’s normal state can cause cell death, which may eventually lead to disease. However, not all aldehydes are necessarily bad; aldehydes give many fruits their smell and taste, but this certainly does not mean fruit is unhealthy or toxic! Aldehydes can even serve important signaling roles in our bodies. Like all chemicals, context is key. That’s why inhalation toxicology studies are so important.

In the context of inhalation, the specific aldehydes listed above are known irritants. For example, acrolein makes you cough and gives you watery eyes when you overdo the heat while cooking – acrolein is produced when oil is heated to its smoke point. Researchers know this about acrolein, but little is known about the flavoring ingredients used in e-liquid. Flavoring ingredients are almost always an aldehyde,  and they have very little if any inhalation toxicology data.  A paper by Jabba et al examined the effects of benzaldehyde (which gives a berry flavor) and vanillin/ethyl vanillin (which gives a vanilla flavor) on respiratory epithelial cells (cells that line our air passages). Because the ingredients change when the e-liquid is heated, this team also looked at the acetal compounds that the flavoring aldehydes form with propylene glycol (PG). These chemicals are referred to as benzaldehyde PG acetal and vanillin/ethyl vanillin PG acetal (Figure 2).

These findings suggest that the mechanisms of toxicity of these compounds are complex. For example, the acetal group makes the compounds more hydrophobic, which might make it easier for them to cross the mitochondrial membrane and cause problems. They could then change back into the reactive aldehydes once in the mitochondrial inner space. This research highlights why the disclosure of ingredients at the time of production is insufficient to make an appropriate assessment on e-liquid safety. Thorough safety assessments must include compounds formed by the degradation of the e-liquid over time or through heating. Robust inhalation toxicology data is needed for all flavoring compounds and their reaction products. And while it is possible that vaping causes less harm than cigarette smoking, this comparison of harm does not mean much when the latter is a tobacco product – the leading cause of preventable death in the United States.