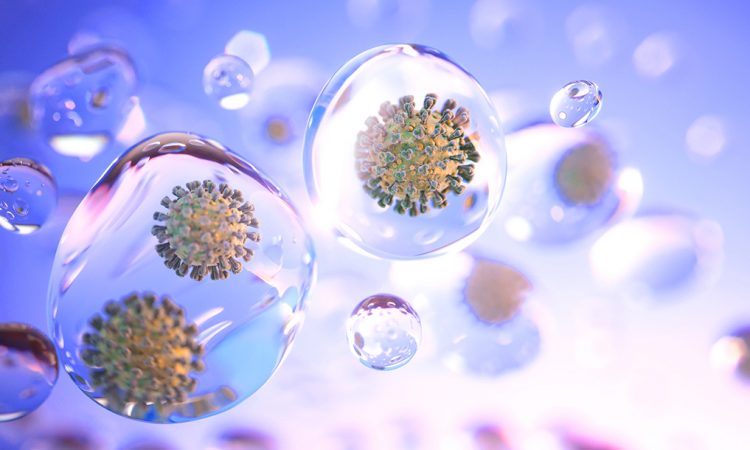 Title: Accurate representations of the microphysical processes occurring during the transport of exhaled aerosols and droplets.

Maybe the “6-foot rule” of social distancing should be 3 feet or 10 feet? To answer this question scientific investigation into the mechanism of transmission of SARS-CoV-2 is essential. Understanding the dynamics of aerosol and droplet transport is critical for understanding transmission of pathogens. Aerosol chemists; Jim Walker and colleagues, have been studying this by elucidating the microphysical properties of bio-analogous aerosols.

Traditionally, research studying the dynamics of biological droplets and aerosols have treated them as either pure water or salt solutions and have given little attention to phase changes when drying. Mucins (high-molecular weight glycosylated proteins) may be one class of material that has been overlooked. They are abundant in saliva and potentially have a large impact of aerosol dynamics. The authors deviated from standard aerosol models by using two biomimetic solutions. One of these solutions was an artificial saliva and one was an artificial deep lung fluid. The saliva was a combination of sodium chloride, potassium chloride, phosphate buffer, mucin and a synthetic cell culture. The deep lung fluid was a mixture of phospholipids, cholesterol, proteins and antioxidants.

The main difference between these solutions were the degrees to which they were hygroscopic (the tendency to absorb moisture from the air). This also indicates the willingness of these solutions to give up water to the air when the relative humidity (RH) is low. Both deep lung fluid and saliva are less hygroscopic than salt. Effectively this means that if you take a 100 micron drop of each solution at 99.5% RH and reduce the RH to 50% the deep lung fluid, saliva, and salt solutions would equilibrate to drops of 30.4 microns, 28.0 microns and 20.9 microns respectively. Taking theses size reductions due to evaporation into account while the particles are suspended is essential for predicting the paths they follow.

Walker and colleagues built a model to determine the position of a single droplet that accounts for temperature, velocity, RH and the changing size of the particle. One key result of the model is in Figure 1a which shows the time it takes a saliva particle of 5- 200 microns to equilibrate to its final size in a 50% RH environment. Ultimately, small particles equilibrate faster. This is very important for understanding associated trajectories of these particles. The model incorporates a buoyant respiratory jet which initially propels the particles forward but stops acting as a force of propulsion when particles settle out of the jet. A cough was determined to have a jet velocity of 10 m/s. The effect of the jet combined with evaporation during sedimentation at 50% RH for particles of size 20-150 microns is illustrated by Figure 1b. The major takeaway from this figure is larger particles settle sooner at shorter distances and reduce in size less when compared with smaller particles at a constant RH. Varying the RH is also important and is probed in Figure 1c for a drop size of 60 microns. A lower RH leads to a greater size reduction and therefore longer travel distances and longer times suspended.

The authors go on to compare saliva against a sodium chloride solution. They found that the difference in hygroscopic response of these two fluids had an impact on sedimentation distance at low RH and droplet sizes less than 80 microns. However, sodium chloride is a decent approximation of the solution for larger droplet sizes and at most environmental RHs. The difference in sedimentation distance from one solution to the next is even lower for speaking (5 m/s) compared to coughing (10 m/s).  Walker and colleagues, however, noted that more biologically realistic solutions and their corresponding time-dependent moisture content may be essential in understanding virus and bacteria survival in droplets.

Another important phenomena that this study touched on were the potential phase changes of these particles due to evaporation. If the RH is less than 45% a phase change occurs in the droplet because enough water is lost that the remaining solute forms either a crystalline, amorphous, or mixed phase particle. This phase change during sedimentation can only happen in particles that have an initial diameter less than 120 microns. A phase change like this leads to different aerodynamic properties, however, it was not accounted for in the model.

The last thing the authors attempt to gain insight into was an airborne volume fraction and potential exposure at different distances. While the model only considered particles along the center trajectory of a respiratory jet it can still provide some indication of the volume fraction of particles from a cough passing through a window that is one meter high. They used a distribution of droplet sizes from a previous study to investigate this. Their conclusions remained consistent with the rest of their work, being that increased temperature and lower RH increased the travel distance and therefore exposure.

This research succeeded in elucidating aerosol dynamics relevant the transmission of SARS-CoV-2, however, more research is needed to make definitive conclusions on appropriate social distancing distances. Walker and colleagues note that further studies should focus on nonspherical aerosol trajectories and deposition dynamics, meaning how the particles land and interact with a mucous membrane. While we can’t yet say the perfect distance to maintain while social distancing, this study is an important step in the right direction.